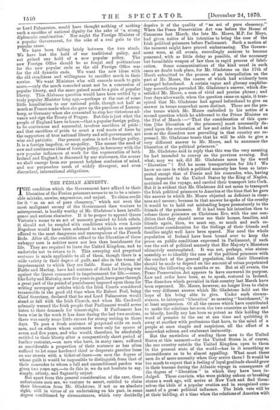 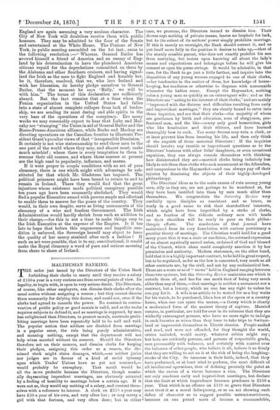 THE condition which the Government have affixed to their liberation of the Fenian prisoners seems to us to be a miser- able mistake, unwise, ungenerous, and unjust. To claim credit for it "as an act of pure clemency," which not even the most malignant enomy of the Government dare venture to misrepresent, is hardly worthy of Mr. Gladstone's keen intelli- gence and serious character. If it be proper to append Queen Victoria's name to an act of amnesty granted to Irish rebels, it should not be coupled with conditions which even Louis Napoleon would have been ashamed to subjoin to an amnesty offered to the most dangerous and unscrupulous of the French Reds. After all, the condition affixed to the liberation of these unhappy men is neither more nor less than banishment for life. They are required to leave the United Kingdom, and to undertake not to return to it. This sweeping and perpetual sentence is made applicable to all of them, though there is a wide variety in their degree of guilt, and also in the terms of imprisonment to which they are liable. Some of them, like Burke and Mackay, have had sentence of death for levying war against the Queen commuted to imprisonment for life,—some, like Luby and Mulcahy, now five years in gaol, have gone through a great part of the period of punishment imposed upon them for writing newspaper articles which the Irish Courts considered treasonable in the good old time when Sir Robert Peel, being Chief Secretary, declared that he and Lord Palmerston would stand or fall with the Irish Church, and when Mr. Cardwell solemnly warned the Irish people that Parliament would never listen to their demands for tenant-right. If Parliament has been wise in the work it has done during the last two sessions, there was surely some little excuse for strong writing in those days. To pass a fresh sentence of perpetual exile on such men, and on others whose sentences were only for spaces of seven and five years, and who would, therefore, be absolutely entitled to their liberty after a comparatively short period of further restraint, —on men who have, in many cases, suffered so considerable a proportion of their sentence as has often sufficed to let some hardened thief or desperate garotter loose on our streets with a ticket-of-leave--on men the degree of whose guilt it would be impossible to distinguish from that of their comrades to whom a full and unconditional pardon was given two years ago,—to do this is, we do not hesitate to say, simply, utterly, and flagrantly unjust.

But apart from this general consideration of the case, these unfortunate men are, we venture to assert, entitled to claim their liberation from Mr. Gladstone, if not as an absolute right, still in virtue of an undertaking on his part, in some degree conditioned by circumstances, which very decidedly

deprive it of the quality of "an act of pure clemency." When the Peace Preservation Act was before the House of Commons last March, the late Mr. Moore, M.P. for Mayo, had given notice of his intention to bring the case of the Irish political prisoners before Parliament. Such a motion at the moment might have proved embarrassing. The Govern- ment were, at all events, exceedingly anxious to become possessed, with as little delay as possible, of the necessary but formidable weapon of law then in rapid process of fabri- cation. Some communications of the kind usual in such cases no doubt took place, for Mr. Gladstone on the 17th of March submitted to the process of an interpellation on the part of Mr. Moore, the course of which had evidently been arranged beforehand. A certain vague and gloomy amphibo- logy nevertheless pervaded Mr. Gladstone's answer, which dis- satisfied Mr. Moore, a man of vivid and precise phrase ; and four days afterwards, when the question came on again, it tran- spired that Mr. Gladstone had agreed beforehand to give an answer in terms somewhat more distinct. These are the pre- cise terms which Mr. Moore embodied in his notice of a second question which he addressed to the Prime Minister on the 21st of March :—" That the consideration of this ques- tion [the liberation of the prisoners] must necessarily de- pend upon the restoration of law and order in Ireland, and as soon as the disorders now prevailing in that country are re- pressed, Mr. Gladstone trusts that he will• be able to give a very different answer to Mr. Moore, and to announce the liberation of the political prisoners."

Mr. Gladstone said in reply that this was the very meaning he had intended to convey on the previous evening. But what, may we ask, did Mr. Gladstone mean by the word " liberation " ? Did he mean transportation for life ? We know no case in which a political amnesty has been so inter- preted except that of Poerio and his comrades, who, having been deported to the United States by the King of Naples, mutinied on the voyage, and carried their transport into Cork. But it is evident that Mr. Gladstone did not mean to transport the Irish political prisoners to America at the time that he gave the answer to which Mr. Moore objected as deficient in clear- ness and savour; because in that answer he spoke of the cruelty it would be to hold out misleading hopes prematurely to the friends of the prisoners. If it had been his intention then to release those prisoners on Christmas Eve, with the one con- dition that they should never see their homes, families, and friends again, then, we must say, so much and such os- tentatious consideration for the feelings of their friends and families might well have been spared. Nor need the whole population of Ireland have been bound over to keep the peace on public conditions expressed in Parliament, if such was the sort of political amnesty that Her Majesty's Ministers ultimately contemplated. It was not, perhaps, wise states- manship so to identify the case of the political prisoners with the conduct of the general population, that their liberation should be made to depend on the amount of crime perpetrated during the following six months or so. But at all events, the Peace Preservation Act appears to have answered its purpose.

Law and order have been, so to speak, restored in Ireland. The disorders which prevailed in that country last March have been repressed. Mr. Moore, however, no longer lives to claim the very different answer which Mr. Gladstone held out the hope of his being able to give. Under such circum- stances, to interpret "liberation" as meaning "banishment," is at least ungenerous. Of all the causes which have contributed to make the relations between the two countries so bitter and

so bloody, hardly any has been so potent as this holding the word of promise to the ear at one time and quibbling it away at another with professions that have, to the mind of a people at once simple and suspicious, all the effect of a somewhat solemn and exuberant insincerity.

But the an wisdom of sending these men to the United States at this moment—for the United States is, of course, the one country outside the United Kingdom open to them in the present state of the world—has in it something so inconsiderate as to be almost appalling. What must these men do of mere necessity when they arrive there ? It would be too much to expect that a feeling of loyal gratitude should grow in their bosoms during the Atlantic voyage in consequence of the degree of " liberation " in which they have been in- dulged. These convicts, who were picking oakum or breaking stones a week ago, will arrive at New York and find them-

selves the idols of a popular ovation and in recognized com- mand of a great political influence. The Irish vote will be at their bidding, at a time when the relations of America with

England are again assuming a very anxious character. The City of New York will doubtless receive them with public honours. They may be admitted to the floor of the Senate and entertained at the White House. The Fenians of New York, in public meeting assembled on the 1st inst., came to the following resolution ;—" Whereas, General Butler has avowed himself a friend of America and an enemy of Eng- land by his determination to have the plundered American citizens repaid for the depredations committed on them by the Alabama and other Southern cruisers, and having signal- ized the Irish as the men to fight England and humble her, be it, therefore, resolved, that we, who love Ireland and wish her liberation, do hereby pledge ourselves to General Butler, that the moment he says 'Rally,' we will be with him." The terms of this declaration are sufficiently absurd. But the fact remains that at a time when the Fenian organization in the United States had fallen into a state of almost complete collapse from lack of leader- ship, we are sending its most daring and able spirits to the very base of the operations of the conspiracy. Ere many weeks we may reasonably expect to hear that Luby and Mul- cahy are "stumping" the Union in aid of General Butler and the Russo-Prusso-American alliance, while Burke and Mackay are directing operations on the Canadian frontier to illustrate Pre- sident Grant's peculiar views of that "irresponsible Dominion." It certainly is not wise statesmanship to send these men to the one part of the world where they may, and almost must, make much mischief ; where there is every temptation to them to resume their old courses, and where those courses at present are the high road to popularity, influence, and means.

If it were proper to couple conditions with an act of pure clemency, there is one which might with advantage be sub- stituted for that which Mr. Gladstone has imposed. The political prisoners might have been bound to return to and to remain in Ireland. There they would find that the great injustices whose existence made political conspiracy possible ten years ago have been summarily abolished. They would find a popular Executive armed with powers ample and effectual to enable them to answer for the peace of the country. They would, in their own despite, serve as living monuments of the clemency of a wise and fearless Government. The Irish Administration would hardly shrink from such an addition to their charge,—for this is not a time to make things easy to the Irish Executive at the expense of the Empire. Is it too late to hope that before this ungenerous and impolitic con- dition is enforced, the Sovereign herself may object to have the quality of her mercy strained after such a fashion ? If such an act were possible, that is to say, constitutional, it would make the Royal clemency a word of pure and serious meaning from shore to shore of Ireland.