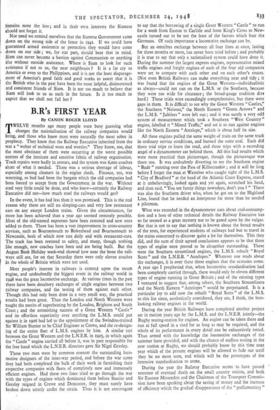 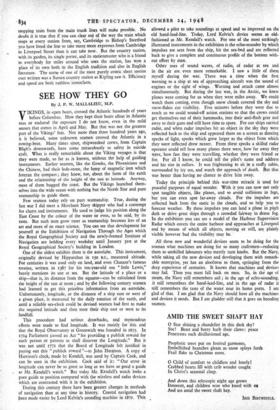 TWELVE months ago many people were busy guessing what changes the nationalisation of the railway companies would bring, and those who knew most were naturally the most sober in prophecy. They knew that the Railway Executive inherited from the war a " welter of technical woes and worries." They knew, too, that the most obstinate of them were occurring at the worst possible centres of the intricate and sensitive fabric of railway organisation. Track repairs were badly in arrears, and the system was. 6,000 coaches short of what it needed. There was a serious shortage of labour, especially among cleaners in the engine sheds. Finance, too, was worrying, so bad had been the bargain which the old companies had been forced to accept from the Government ,in the war. Without steel very little could be done, and who knew—certainly the Railway Executive did not—how much steel the railways would get?

In the event, it has had less than it was promised. This is the real reason why there are still no sleeping-cars and very few restaurant cars on any except London trains. Given the circumstances, far more has been achieved than a year ago seemed remotely possible. Most of the old-named expresses have been restored and new ones added to them. There has been a vast improvement in cross-country services, such as Bournemouth to Birkenhead and Bournemouth to Newcastle, both of which now run daily and with restaurant-cars. The track has been restored to safety, and many, though nothing like enough, new coaches have been and are being built. But the August Bank Holiday week-end showed how near the bone the rail- ways still are, for on that Saturday there were only eleven coaches in the whole of Britain which were not used.

Most people's interest in railways is centred upon the steam engine, and undoubtedly the biggest event in the railway world in 1948 was the great locomotive exchange. At various times in the past there have been desultory exchanges of single engines between two railway companies, and the testing of them against each other. Though this had only been done in a very small way, the practical results had been great. Thus the London and North Western were taught the merits of superheating by the London, Brighton and South Coast ; and the astonishing success of a Great Western "Castle" and its effortless superiority over anything the L.M.S. could put against it in 1926 had led to the appointment of the Swindon-trained Sir William Stanier to be Chief Engineer at Crewe, and the re-design- ing of the entire fleet of L.M.S. engines by him. A similar test between the Great Western and the L.N.E.R. in 1925, in which again the " Castle " engine carried all before it, was in part responsible for the free hand which the L.N.E.R. directors gave Sir Nigel Gresley.

These two men were by common consent the outstanding loco- motive designers of the inter-war period, and before the war came they had both completed the bulk of their work in furnishing their respective companies with fleets of completely new and immensely efficient engines. Had these two lines tried to go through the war with the types of engines which dominated them before Stanier and Gresley reigned in Crewe and Doncaster, they must surely have broken down utterly under the strain. Thus it is not extravagant to say that the borrowing of a single Great Western " Castle " to run for a week from Euston to Carlisle and from King's Cross to New- castle turned out to be not the least of the factors which beat the Germans. Of such importance a locomotive exchange can be.

But an omnibus exchange between all four lines at once, lasting for three months or more, has never been tried before ; and probably it is true to say that only a nationalised system could have done it. During the summer the largest express engines, representative mixed traffic engines and freight engines of each of the four old companies were set to compete with each other and on each other's routes. (Not even British Railways can make everything neat and tidy ; it was found that the engines of the Great Western—individualistic as always—could not run on the L.M.S. or the Southern, because they were too wide for clearance ; the broad-gauge tradition dies hard.) These trials were exceedingly comprehensive, but there were gaps in them. It is difficult to see why the Great Western "Castles," the Southern " Nelsons," the North Eastern " Green Arrows " and the L.M.S. " Jubilees " were left out ; and it was surely a very odd system of measurement which took a Southern " West Country" engine, labelled it "Mixed Traffic," and set it to run against engines like the North Eastern "Antelope," which is about half its size.

All these engines pulled the same weight of train on the same track in ordinary service conditions, and burned the same coal. Each did three trial trips to learn the road, and three trips with a recording angel of a dynamometer car behind them. All this had results which were more practical than picturesque, though the picturesque was there too. It was undoubtely diverting to see the Southern engine

Bude " running over the Pass of Killiecrankie ; and it will be long before I forget the man at Waterloo who caught sight of the L.M.S. " City of Bradford " at the head of the Atlantic Coast Express, stared at it unbelievingly, looked again and yet again, scratched his head, and then said, " You see funny things nowadays, don't you ? " There was also the Southern driver who, when he got on to the Highland Line, found that he needed an interpreter far more than he needed a pilotman.

What was recorded in the dynamometer cars about coal-consump- tion and a host of other technical details the Railway Executive has so far treated as a great mystery not to be gazed upon by the vulgar. But that is not to say that nothing is known about the broad results of the tests, for experienced students of railways had but to travel in the trains concerned to discover quite a lot for themselves. This they did, and the sum of their agreed conclusions appears to be that three types of engine were proved to be altogether outstanding. These were the Southern streamlined engines, the L.M.S. rebuilt " Royal Scots " and the L.N.E.R. " Antelopes." Whatever one reads about the exchanges, it is over these three engines that the ecstasies come. A year ago I prophesied that, when locomotive standardisation had been completely carried through, there would only be eleven different types of engine running in Great Britain ; and of the existing types I ventured to suggest that, among others, the Southern Streamliners and the North Eastern " Antelopes " would be perpetuated. It is a particular joy to add now the rebuilt " Royal Scots " of the L.M.S. to this list since, aesthetically considered, they are, I think, the best- looking railway engines in the world.

During the year British Railways have completed another project set in motion years ago by the L.M.S. and the L.N.E.R. jointly—the Rugby testing-station for engines. An engine can be taken there and run at full speed in a shed for as long as may be required, and the whole of its performance in every detail can be exhaustively tested. Thus armed with the knowledge the locomotive exchanges of the summer have provided, and with the chance of endless testing in the new station at Rugby, we should probably know by this time next year which of the present engines will be allowed to fade out until they be no more seen, and which will be the prototypes of the intensive standardisation to come.

During the year the Railway Executive seems to have passed sentence of eventual death on the small country station, and both Sir Eustace Missenden and the Chairman of the Transport Commis- sion have been speaking about the saving of money and the increase of efficiency which the gradual disappearance of the " parliamentary " stopping train from the main trunk lines will make possible. No doubt it is true that if you can clear out of the way the train which stops at every station from, say, Cambridge to Bishop's Stortford you have freed the line to take many, more expresses from Cambridge to Liverpool Street than it can take now. But the country station, with its garden, its single porter, and its stationmaster who is a friend to everybody for miles around who uses the station, has won a place of its own both in the English tradition and also in English literature. The scene of one of the most purely comic short stories ever written was a Sussex country station as Kipling saw it. Efficiency and speed are both ruthless iconoclasts.