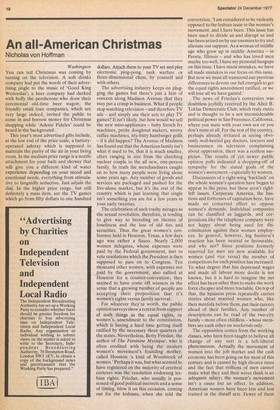 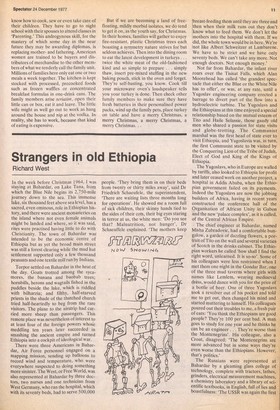 Washington You can tell Christmas was coming by turning on the television. A soft drinks company had put the words of their advertising jingle to the music of 'Good King Wenceslas'; a beer company had decked with holly the percherons who draw their ceremonial old-time beer wagon; the friendly small loan companies, which are very large indeed, invited the public to come in and borrow money for Christmas shopping while `Adeste Fideles' could be heard in the background.

This year's most advertised gifts include, at the low end of the price scale, a batteryoperated ashtray which is supposed to maintain the purity of the air in your living room. In the medium price range is a nozzle attachment for your bath and shower that will give you a different kind of water experience depending on your mood and emotional needs, everything from stimulative to languidly seductive. Just adjuk the dial. In the higher price range, but still definitely a mass item, are the TV games which go from fifty dollars to one hundred dollars. Attach them to your TV set and play electronic ping-pong, tank warfare or three-dimensional chess, by yourself and with others.

The advertising industry keeps on plugging the games but there's just a hint of concern along Madison Avenue that they may put a crimp in business. What if people stop watching television — and therefore TV ads — and simply use their sets to play TV games? It isn't likely, but how would we sell the new mini-appliances — baby french fry machines, petite doughnut makers, weeny coffee machines, itty-bitty hamburger grills — if it did happen? The Avenue of Madness has found out that the American family isn't what it used to be, that it is much smaller, often ranging in size from the clutching nuclear couple to the all new, one-person family. In truth the merchandisers caught on to how many people were living alone some years ago. Any number of goods and services are packaged and pushed for the live-alone market, but it's the rest of the country which is just learning that single isn't something you are for a few years in your early twenties.

The celebration of such trashy mirages as the sexual revolution, therefore, is tending to give way to brooding on themes of loneliness and the loss of old ties and securities. Thus the great women's conference held in Houston, Texas, a few days ago was rather a fiasco. Nearly 2,000 women delegates, whose expenses were paid by the Federal government, met to vote resolutions which the President is then supposed to pass on to Congress. Ten thousand other women, with expenses not paid by the government, also rallied at Houston for a counter-convention; they seemed to have come off winners in the sense that a growing number of people are accepting their proposition that it's women's rights versus family survival.

For whatever they're worth, the public opinion surveys show a retreat from support of such things as the equal rights, or women's, amendment to the constitution, which is having a hard time getting itself ratified by the necessary three quarters of the states. Nevertheless, Betty Friedan, the author of The Feminine Mystique, who is often credited with being the modern women's movement's founding mother, called Houston 'a kind of Woodstock of women.' Perhaps it was, but what seemed to have registered on the majority of cerebral cortexes was the resolution endorsing lesbian rights. Friedan, who usually is possessed of good political instincts and a sense of timing, blew it on this occasion, coming out for the lesbians, when she told the convention, am considered to be violently opposed to the lesbian issue in the woman's movement, and I have been. This issue has been used to divide us and disrupt us and has been seized on by our enemies to try and alienate our support. As a woman of middle age who grew up in middle America — in Peoria, Illinois — and who has loved men maybe too well, I have my personal hangups on this issue. I have made mistakes, we have all made mistakes in our focus on this issue. But now we must all transcend our previous differences to devote our full energies to get the equal rights amendment ratified, or we will lose all we have gained.'

The news of Friedan's conversion was doubtless joyfully received by the Alice B. Toklas Democratic Club, which truly exists and is thought to be a not inconsiderable political power in San Fransisco, California, where you mate with your own sex or you don't mate at all. For the rest of the country, perhaps already irritated at seeing obviously well-heeled gay doctors, lawyers and businessmen on television complaining about oppression, there was a restless suspicion. The results of yet newer public opinion polls indicated a dropping-off of sympathy for the stated goals of the women's movement —especially by women.

Discussions of a right-wing 'backlash' on the whole women's question have begun to appear in the press, but these aren't rightleft issues. Corporate America, the bastions and fortresses of capitalism here, have made no concerted effort to oppose women's demands. Individual companies can be classified as laggards, and corporations like the telephone company were not happy about being sued for discrimination against their women employees. In general, however, big business's reaction has been neutral or favourable, and why not? Since positions formerly reserved for men are now available for women (and vice versa) the number of competitors for each position has increased. To what degree that has depressed wages and made all labour more docile is not known, but it is hard to imagine the net effect has been other than to make the work force cheaper and more tractable. On top of that, the tipsiness press repeatedly carries stories about married women who, like their menfolk before them, put their careers ahead of their families, Any number of descriptions can be read of the two-city family — more often childless whose members see each other on weekends only.

The opposition comes from the working classes, who have been taught to believe all change of any sort is a left-liberal phenomenon. Actually the movement of women into the job market and the cash economy has been going on for most of this century and is caused by high divorce rates and the fact that millions of men cannot make what they and their wives think is an adequate salary; the women's movement isn't a cause but an effect. In addition, American women have been less and less trained in the distaff arts. Fewer of them know how to cook, sew or even take care of their children. They have to go to night school with their spouses to attend classes in 'Parenting.' This androgynous skill, for the mastery of which some day in the near future they may be awarding diplomas, is replacing motherand fathering. American women are trained to be buyers and distributors of merchandise to the other members of what we tenderly call the family unit. Millions of families here only eat one or two meals a week together. The kitchen is kept stocked with processed, precooked foods such as frozen waffles or concentrated breakfast formulas in one-drink cans. The family members arise seriatim, open their little can or box, eat it and leave. The little wife might as well go out to work as hang around the house and nip at the vodka. in reality, she has to work, because that kind of eating is expensive. But if we are becoming a land of freefloating, mildly morbid isolates, we do tend to get it on, as the youth say, for Christmas. In their homes, families will gather to enjoy fire-resistant, plastic Christmas trees each boasting a symmetry nature strives for but seldom achieves. Then into the dining room to eat the latest development in turkeys. . . twice the white meat of the old-fashioned kind and so simple to prepare . . . simply thaw, insert pre-mixed stuffing in the new baking pouch, stick in the oven and forget. They're self-basting, you know. Cook till your microwave oven's loudspeaker tells you your turkey is done. Then check other family members to make sure they have fresh batteries in their personalised power packs, wind up the family pets, place turkey on table and have a merry Christmas, a merry Christmas, a merry Christmas, a merry Christmas. . .