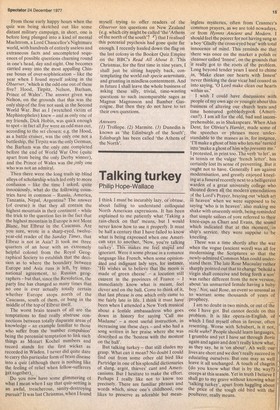 I think I must be incurably lazy, or obtuse, about failing to understand colloquial North American expressions. It has been explained to me patiently what 'Taking a rain-check on that' means, but I would never know how to use it properly. It must be half a century that I have failed to know what is being expressed when one American says to another, 'Now, you're talking Tl—tiakes me feel sttiiid ancf ignorant. Were it some phrase in a romance language like French, when some opinionated and indignant lady says, for instance, -1-fe wishes LISto believe that the mo6n is made of green cheese' – a locution still current in the provinces of France – I immediately know what is meant, feel clever and on the ball. Come to think of it, that last phrase is one which only came to me fairly late in life. I think it must have' been when I attended a New York musical about a feniale ambassadress who goes down in history for saying 'Call me Madame' – a most useful instruction, in increasing use these days – and who had a song written in her praise where she was descrihed as the 'hostess with the mostesr on the ball'.

But talking turkey – that still eludes my grasp. What can it mean? No doubt I could find out from some other old bird like Partridge in one of his splendid dictionaries of slang, argot, thieves' cant and Americanisms. But I hesitate to make the effort. Perhaps I really like not to know too precisely. There are familiar phrases and words which, since one's childhood, one likes to preserve as adorable but mean ingless mysteries, often from Cranmer's common prayers, as we are told nowadays, or from Hymns Ancient and Modern. I should feel the poorer for not having sung as a boy 'Gladly the cross-eyed bear' with total innocence of mind. This reminds me that there was once on the market a polish or cleanser called `Innest', on the grounds that it really got to the roots of the problem. 'Long beyond tender years I used to chime lin, 'Make clean our hearts with Innese never thinking the dear vicar had coaxed us into saying, '0 Lord make clean our hearts within us.'

I wish I could have discussions with people of my own age or younger about this 'business of altering our church texts and time honoured gobbledygook (American?). I am all for the old, bad and incomprehensible, as in Shakespeare. When Alan Dent, for Olivier's Hamlet, made some of the speeches or phrases more understandable to the masses as in, for instance, 'I'll make a ghost of him who lets me' turned into 'make a ghost of him who prevents me.' I protested, in print too. The verb `to let', as in tennis or the vulgar 'french letter', has certainly lost its sense of preventing. But it ought not to have. Generally I am against modernisation, and greatly enjoyed kneeling at a funeral recently next to a belligerent warden of a great university college who shouted down all the modern emendations of the Lord's Prayer, braying out 'which art. ih heaven' when we were supposed to he saying 'who is in heaven', also making me shake with unseemly mirth, being reminded that simple sailors of yore referred to their knee-caps as Chart and Evans. the sound which indicated that at this moment, in ship's service, they were suppose to be kneeling.

There was a time shortly after the war when the vogue (ancient word) was all for modernising the Scriptures so that the newly-admired Common Man could understand them. The late Rose Macaulay rather sharply pointed out that to change 'behold a virgin shall conceive and bring forth a son' was rather different from the new version, about 'an unmarried female having a baby boy.' Not, said Rose, an event so unusual as to warrant some thousands of years of prophecy.

I am no doubt in two minds, or out of the one I have got. But cannot decide on this problem. It is like opera-in-English, of which I find myself often in favour, often resenting. Worse with Schubert, is it not, nicht wahr? People should learn languages, I grumble and yet I have sat through Boris again and again and don't really know what, as they say, he is 'on about'. Ah well: our lives are short and we don't really succeed in educating ourselves. But one may as well leave it all unchanged. A touch of chagrin (do you know what that is by the way?) creeps at this season. Yet in truth I believe I shall go to my grave without knowing what 'talking turkey', apart from haggling about the price of the tough old bird with the poulterer, really means.