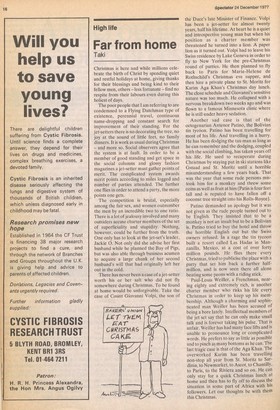 Christmas is here and while millions celebrate the birth of Christ by spending quiet and restful holidays at home, giving thanks for their blessings and being kind to their fellow men, others — less fortunate — find no respite from their labours even during this holiest of days.

The poor people that I am referring to are condemned to a Flying Dutchman type of existence, perennial travel, continuous name-dropping and constant search for improvement of their standing. For the jet-setters there is no decorating the tree, no joy at the sound of little feet, no family dinners. It is work as usual during Christmas — and more so. Social observers agree that the system is at fault. In order to be a member of good standing and get space in the social columns and glossy fashion magazines a jet-setter must gather points of merit. The complicated system awards merit points according to miles logged and number of parties attended. The further one flies in order to attend a party, the more points one gets.

The competition is brutal, especially among the fair sex, and women outnumber the men by an incredible two to one ratio. There is a lot of jealousy involved and many outsiders accuse charter members of the set of superficiality and stupidity. Nothing, however, could be further from the truth. One only has to look at the jet-set's leader, Jackie O. Not only did she advise her first husband while he planned the Bay of Pigs, but was also able through business acumen to acquire a large chunk of her second husband's will that had originally left her out in the cold.

There has never been a case of a jet-setter worth his or her salt who did not fly somewhere during Christmas. To be found at home would be unforgivable. Take the case of Count Giovanni Volpi, the son of the Duce's late Minister of Finance. Volpi has been a jet-setter for almost twenty years, half his lifetime. At heart he is a quiet and introspective young man but when his position as a charter member was threatened he turned into a lion. A paper lion as it turned out. Volpi had to leave his Swiss residence by Lake Geneva in order to fly to New York for the pre-Christmas round of parties. He then planned to fly back to Paris for Marie-Helene de Rothschild's Christmas eve supper, and then hire a private plane to St. Moritz for Karim Aga Khan's Christmas day lunch. The close schedule and Giovanni's sensitive nature was too much. He collapsed with a nervous breakdown two weeks ago and was flown to a famous Minnesota clinic where he is still under heavy sedation.

Another sad case is that of the octogenarian Antenor Patino, the Bolivian tin tycoon. Patino has been travelling for most of his life. And travelling in a hurry. He has been dodging the tax-man as long as he can remember and the dodging, coupled with the social climbing, has taken years off his life. He used to recuperate during Christmas by staying put in ski stations like Gstaad and St. Moritz until a horrible misunderstanding a few years back. That was the year that some rude persons mistook him for a monkey and threw some coins as well as fruit at him (Patin is four feet tall and is reputed to have fallen off a coconut tree straight into his Rolls-Royce).

Patino demanded an apology but it was not given as the rude people turned out to be English. They insisted that to be a monkey is not an insult but to be a Bolivian is. Patino tried to buy the hotel and throw the horrible English out but the Swiss owners refused. In a rage the tin tycoon built a resort called Las Hadas in Manzanilla, Mexico, at a cost of over forty million pounds. He flies there every Christmas, tried to publicise the place with a party that set him back a further halfmillion, and is now seen there all alone beating some peons with a riding stick.

Paul-Louis Weiller, a Frenchman, nearing eighty and extremely rich, is another charter member who risks his life every Christmas in order to keep up his membership. Although a charming and sophisticated man Weiller has been accused of being a bore lately. Intellectual members of the jet set say that he can only make small talk and is forever taking his pulse. That is unfair. Weiller has had many face lifts and is unable to pronounce long or complicated words. He prefers to say as little as possible and to pinch as many bottoms as he can. The last tragic case is that of the Aga Khan. The overworked Karim has been travelling non-stop all year from St. Moritz to Sardinia, to Newmarket, to Ascot, to Chantilly, to Paris, to the Riviera and so on. He can only stay for a quick Christmas lunch at home and then has to fly off to discuss the situation in some part of Africa with his followers. Let our thoughts be with them this Christmas.