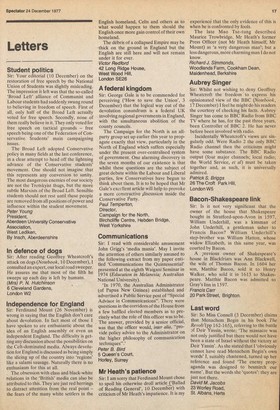 Sir: I read with considerable amusement John Grigg's 'media mania'. May I invite the attention of others similarly amused to the following extract from my paper entitled 'Communications the Quintessential' presented at the eighth Waigani Seminar in 1974 (Education in Melanesia; Australian National University).

'In 1970, the Australian Administrator (of Papua New Guinea) established and advertised a Public Service post of "Special Advisor in Communications". There were questions in the corridors of the House from a few baffled elected members as to precisely what the role of this officer was to be. The answer, provided by a senior official, was that the officer would, inter alia, "provide policy advice to the Administrator on the higher philosophy of communication techniques".'