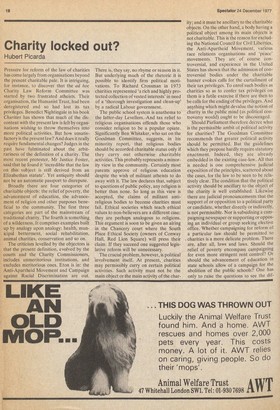 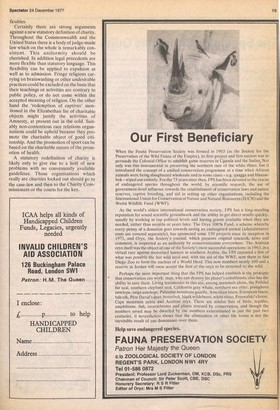 Pressure for reform of the law of charities has come largely from organisations beyond the present charitable pale. It is intriguing, for instance, to discover that the ad hoc Charity Law Reform Committee was started by two frustrated atheists. Their organisation, the Humanist Trust, had been deregistered and so had lost its tax privileges. Benedict Nightingale in his book Charities has shown that much of the discontent with the present law is felt by organisations wishing to throw themselves into more political activities. But how unsatisfactory is the present law? And dues it really require fundamental changes? Judges in the past have fulminated about the arbitrariness of the definition of a charity. The most recent protester, Mr Justice Foster, said that he found it 'incredible that the law on this subject is still derived from an Elizabethan statute'. Yet antiquity should not be an automatic passport to disrepute.

Broadly there are four categories of charitable objects: the relief of poverty, the advancement of education, the advancement of religion and other purposes beneficial to the community. The first three categories are part of the mainstream of traditional charity. The fourth is something of a wilderness. It comprises examples built up by analogy upon analogy: health, municipal betterment, social rehabilitation, animal charities, conservation and so on.

The criticism levelled by the objectors is that the present definition, evolved by the courts and the Charity Commissioners, includes unmeritorious institutions, and excludes meritorious ones. Eton is in: the Anti-Apartheid Movement and Campaign against Racial Discrimination are out. There is, they say, no rhyme or reason in it. But underlying much of the rhetoric it is possible to identify firm political motivations. To Richard Crossman in 1973 charities represented 'a rich and highly protected collection of vested interests' in need of a 'thorough investigation and clean-up' by a radical Labour government.

The public school system is anathema to the latter-day Levellers-And tax relief to religious organisations offends those who consider religion to be a popular opiate. Significantly Ben Whitaker, who sat on the Goodman Committee, suggests, in his minority report, that religious bodies should be accorded charitable status only if they carry out otherwise charitable activities. This probably represents a minority view in the community. Certainly, most parents approve of religious education despite the wish of militant atheists to do away with it. The law declares that, subject to questions of public policy, any religion is better than none. So long as this view is accepted, the claims of militant antireligious bodies to become charities must fail. Ethical societies which teach ethical values to non-believers are a different case: they are perhaps analogous to religions. This argument is soon to be given an airing in the Chancery court where the South Place Ethical Society (owners of Conway Hall, Red Lion Square) will press their claim. If they succeed one suggested legislative reform will be unnecessary.

The crucial problem, however, is political Involvement itself. At present, charities may permissibly carry on certain political activities. Such activity must not be the main object or the main activity of the char ity; and it must be ancillary to the charitable objects. On the other hand, a body having a political object among its main objects is not charitable. This is the reason for excluding the National Council for Civil Liberties, the Anti-Apartheid Movement, various race relations organisations and 'peace' movements. They are of course controversial, and experience in the United States has shown that the admission of controversial bodies under the charitable banner evokes calls for the curtailment of their tax privileges. To enrol such bodies as charities so as to confer tax privileges on them is a futile exercise if there are then to be calls for the ending of the privileges. And anything which might devalue the notion of charity in the public mind (as political controversy would) ought to be discouraged.

Should Parliament therefore decree what is the permissible ambit of political activity for charities? The Goodman Committee recommends that greater political activity should be permitted. But the guidelines which they propose hardly require statutory enactment. Indeed, they are already embedded in the existing case-law. All that is needed is one comprehensive judicial exposition of the principles, scattered about the cases, for the law to be seen to be relatively clear. The condition that the political activity should be ancillary to the object of the charity is well established. Likewis there are judicial pronouncements that the support of or opposition to a political party or candidate, Whether directly or indirectly, is not permissible. Nor is subsidising a campaigning newspaper or supporting or opposing an individual or group seeking elective office. Whether campaigning for reform of a particular law should be permitted to . charities is a more delicate problem. There are, after all, laws and laws. Should the relief of poverty encompass campaigning for even more stringent rent control? Or should the advancement of education in state schools allow of a campaign for the abolition of the public schools? One has only to raise the questions to see the dif fieulties.

Certainly there are strong arguments against a new statutory definition of charity. Throughout the Commonwealth and the United States there is a body of judge-made law which on the whole is remarkably consistent. This uniformity should be cherished. In addition legal precedents are more flexible than statutory language. This flexibility can be applied to expulsion as well as to admission. Fringe religions carrying on brainwashing or other undesirable practices could be excluded on the basis that their teachings or activities are contrary to public policy, or do not come within the accepted meaning of religion. On the other hand the 'redemption of captives' mentioned in the Elizabethan list of charitable objects might justify the activities of Amnesty, at present out in the cold. Suitably non-contentious race relations organisations could be upheld because they promote the charitable object of good citizenship. And the promotion of sport can be based on the charitable nature of the promotion of health.

A statutory redefinition of charity is likely only to give rise to a hot of new problems with no conveniently available guidelines. Those organisations which really are charities locked out should go to the case-law and then to the Charity Commissioners or the courts for the key.