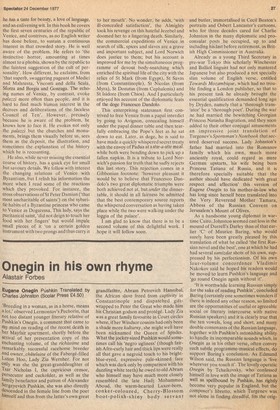 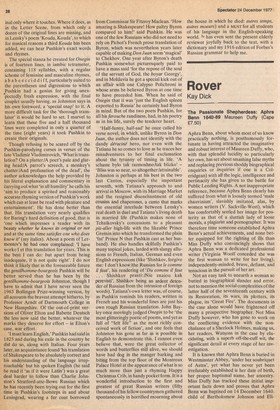 Onegin in his own rhyme

Eugene Onegin Pushkin Translated by Charles Johnston (Scalar Press £4.50) 'Breeding in a woman, as in a horse, means a lot,' observed Lermontov's Pechorin, that net too distant younger literary relative of Pushkin's Onegin, a comment that came to my mind on reading of the recent death in her Mayfair apartment, shortly before the arrival of her presentation copy of this enchanting volume, of the richissime and remarkably successful racehorse breeder and owner, ehdtelaine of the Faberge-filled Luton Hoo, Lady Zia Wernher, For not only was she the great-granddaughter of Tsar Nicholas I, the capricious censor, Persecutor and cuckolder, as well as the family benefactor and patron of Alexander Sergeyevich Pushkin, she was also directly descended in the female line from the poet himself and thus from the latter's own great grandfather, Abram Petrovich Hannibal, the African slave freed from captivity in Constantinople and dispatched giftwrapped to Peter the Great who made him his Christian godson and protégé. Lady Zia was a great family favourite in Court circles where, if her Windsor cousins had only been a shade more kuhurny, she might well have been nicknamed the Queen of Spades. What the jockey.sized Pushkin would sometimes call his 'negro ugliness' (though fairish Afro-curly hair and thick lips were really all that gave a negroid touch to his brightblue-eyed, expressive pale-skinned face which was dark only by comparison with his dazzling white teeth) he owed to old Abram who himself may have much more closely resembled the late Hadj Mohammed Aboud, the warm-hearted Luxor-born, conker-coloured, Cherry-Blossom boot-polish-shiny body servant and butler, immortalised in Cecil Beaton's portraits and Osbert Lancaster's cartoons, who for three decades cared for Charlie Johnston in the many diplomatic and proconsular posts he occupied, up to and including his,last before retirement, as British High Commissioner in Australia.

Already as a young Third Secretary in pre-war Tokyo this scholarly Winchester and Balliol linguist had not only mastered Japanese but also produced a not specially slim volume of English verse, entitled Towards Mozambique, which had no trouble finding a London publisher, so that to his present task he already brought the essential qualification demanded long ago by Dryden, namely that a 'thorough translator' be a 'thorough poet'. During the war ne had married the bewitching Georgian Princess Natasha Bagration, and they soon added to their other conjugal amusements an impressive joint translation of Turgenev's Sportsman's Notebook that secured deserved success. Lady Johnston's father had married into the Rornanov family which his own, much more anciently royal, could regard as mere German upstarts, his wife being born Princess Tatiana of Russia, and it is therefore specially suitable that the author should have dedicated 'with great respect and affection' this version of Eugene Onegin to his mother-in-law who has long since herself been translated into the Very Reverend Mother Tamara, Abbess of the Russian Convent on Jerusalem's Mount of Olives.

As a ,handsome young diplomat in wartime Cairo, Johnston seemed cast less in the mound of Durrell's Darley than of that earlier 'C' of Maurice Baring, who would surely have been greatly pleased by this translation of what he called 'the first Russian novel and the best', one at which he had had several sarnizdat shots of his own, suppressed by his perfectionism. Of his own four-volume concordance Vladimir Nakokov said he hoped his readers would be moved to learn Pushkin's language and `go round Onegin again without it'.

'It is worthwhile learning Russian simply for the sake of reading Pushkin', concluded Baring (certainly one sometimes wonders if there is indeed any other reason, so limited are the opportunities of useful or agreeable social or literary intercourse with native Russian speakers) and it is clearly true that the ten vowels, long and short, and many double consonants of the Russian language, together with Pushkin's astonishing ability to handle its incomparable sounds which, in Onegin as in his other verse, often convey such subtle programme-musical effects, do support Baring's conclusion, As Edmund Wilson said, the Russian language is 'live wherever you touch it'. The lovely operatic Onegin by Tchaikovsky, who confessed himself in love with the image of Tatiana as well as spellbound by Pushkin, has rightly become very popular in England, but the composer's libretto, which Turgenev was not alone in finding dreadful, fits the orig. inal only where it touches. Where it does, as in the Letter Scene, from which only a dozen of the original lines are missing, and in Lensky's poem `Kouda, Kouda', to which for musical reasons a third Kouda has been added, we can hear Pushkin's exact words and rhymes.

The special stanza he created for Onegin is of fourteen lines, in iambic tetrameter, containing 118 syllables, with a regular scheme of feminine and masculine rhymes, ab ab e e cc iddi if f, particularly suited to the parentheses and digressions to which yushk in had a genius for giving unexPectedly fresh expression, with the final couplet usually having, as Johnston says in his own foreword, a 'special snap' to it. A more difficult task for the 'thorough translator' it would be hard to set. I marvel to learn that these five and a half thousand lines were completed in only a quarter of the time (eight years) it took Pushkin to create_their originals.

Though refusing to be scared off by the Pushkin-parodying curses in verses of the late Vladimir Vladimirovich, 'What is translation? On a platter/A poet's pale and glaring head/A parrot's screech, a monkey's chatter/And profanation of the dead', the author acknowledges the help provided by his literal explanation and commentary in carrying out what 'in all humility' he calls his 'aim to produce a spirited and reasonably accurate rhyming version of Pushkin's work which can at least be read with pleature and entertainment'. He has done better than that. His translation very nearly qualifies for Baring's hard definition of good, that is 'one which impresses a reader with its beauty whether he knows its original or not and at the same time satisfies one who does know it' (my italics). About a poem of Lermontov's he had once complained: have workel at this translation for years. This is the best I can do: but apart from being inadequate, it is not quite right'. I do not think it likely that in the foreseeable future the gentilhomme-bourgeois Pushkin will be better served than he has been by the gentilhomrne-bourgeols Johnston, though have to admit that I have never seen the 1963 Bollingen Prize-winning version, by all accounts the bravest attempt hitherto, by Professor Arndt of Dartmouth College in New Hampshire. Of the out-of-print versions of Oliver Elton and Babette Deutsch the less now said the better, whatever the marks they deserve for effort — in Elton's case, war effort.

'I must learn English,' Pushkin had said in 1825 and during his exile in the country he did do so, along with Italian. Four Years later, an acquaintance found 'his translation of Shakespeare to be absolutely correct and his understanding of the language irreproachable' but his spoken English (he said he read it 'as jilt were Latin') was a great deal harder to follow than Charlie John. ston's Stratford-atte-Bowe Russian which he has recently been trying out for the first time in Pushkin's footsteps in and about Leningrad, wearing a fur coat borrowed from Commissar Sir Fitzroy Maclean. 'How amazing is Shakespeare! How paltry Byron compared to him!' said Pushkin. He was one of the few Russians who did not need to rely on Pichot's French prose translation of Byron, which was nevertheless years later capable of making Don Juan seem magical' to Chekhov. One year after Byron's death Pushkin somewhat picturesquely paid to have a mass said 'for the repose of the soul of the servant of God, the boyar Georgy', and in Moldavia he got a special kick out of an affair with one Calypso Polichroni in whose arms he believed Byron at one time to have preceded him. When he said of Onegin that it was 'just the English spleen exported to Russia' he certainly had Byron in mind. But of the two poets Pushkin, for all his farouche randiness, had, in his poetry as in his life, surely the tenderer heart.

'Half-funny, half-sad' he once called his verse novel, in which, unlike Byron in Don Juan, the author does not identify with the dandy deracine hero, nor even with the Tatiana he so comes to love as he traces her misadventures to her final exclamation about the tyranny of timing in life. 'A schaste bylo tak razmoshno/tak blizko' — 'Bliss was so near, so altogether/attainable'. Johnston is perhaps at his best in the two last Cantos, especially the important seventh, with Tatiana's approach to and arrival in Moscow, with its Marriage Market and the resigned disenchantment of old cousins and chaperones, a canto that marks the essential interlude between Lensky's real death in duel and Tatiana's living death in married life (Pushkin makes none of Tchaikovsky's concessions to a pleasant pis-aller high-life with the likeable Prince Gremin into which he transformed the plain 'fat' Prince N that Pushkin cast as her husband). He also handles skilfully Pushkin's many topical jokes, larded with slangy allusions to French, Italian, German and even English expressions (like `Shishkov, forgive me: I don't know/the Russian fork comme il taut', his rendering of 'Du comme ii faut Shishkov prasti: /Nie znaiou kak perevisti', Shishkov being an ardent detender of Russian from the intrusion of foreign words). Tatiana's own letter was, of course, as Pushkin reminds his readers, written in French and his wonderful lines are just his own rough Russian translation. John Bayley once movingly judged Onegin to be 'the most glitteringly poetic of poems, and yet as full of "felt life" as the most richly conceived work of fiction', and one feels that Johnston has gone as far as is possible in English to demonstrate this. I cannot even believe that, were the great collector of words and butterflies still alive, we should have had dog in the manger barking and biting from the top floor of the Montreux Palace Hotel at the appearance of what is so much more than just a rhyming Happy Christmas Crib, in handy pocket form. It is a wonderful introduction to the first and greatest of great Russian writers (fifty thousand of his fellow countrymen gathered spontaneously in horrified mourning about the house in which he died: autres temps, autres moeurs) and a MUST for all students of his language in the English-speaking world. Tt has even sent the present elderly reviewer joyfully back to the text, with a dictionary and my 1916 edition of Forbes's Russian grammar to help me.