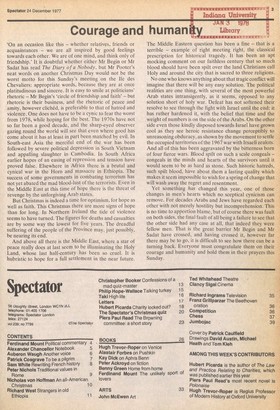 human Library Y. maninetaamtituouvitotmonomr, ' 'On an occasion like this — whether relatives, friends or acquaintances — we arc all inspired by good feelings towards each other. We are of one mind, and think only of friendship.' It is doubtful whether either Mr Begin or Mr Sadat has read The Diary of a Nobody, but Mr Pooter's neat words on another Christmas Day would not be the worst motto for this Sunday's meeting on the Ile des Chevaliers: appropriate words, because they are at once platitudinous and sincere. It is easy to smile at politicians' rhetoric — Mr Begin's 'circle of friendship and faith' — but rhetoric is their business, and the rhetoric of peace and amity, however cliched, is preferable to that of hatred and violence. One does not have to be a cynic to fear the worst from 1978, while hoping for the best. The 1970s have not so far been a good decade, and the sharp-eyed observer gazing round the world will see that even where good has come about it has at least in part been matched by evil. In South-east Asia the merciful end of the war has been followed by severe political depression in South Vietnam and appalling slaughter in Cambodia. In South Africa earlier hopes of an easing of repression and tension have proved false. Elsewhere in Africa there is a brutal and cynical war in the Horn and massacre in Ethiopia. The success of some governments in combating terrorism has not yet abated the mad blood-lust of the terrorists. Even in the Middle East at this time of hope there is the threat of revenge by the unforgiving Arab states, But Christmas is indeed a time for optimism, for hope as well as faith. This Christmas there are more signs of hope than for long. In Northern Ireland the tide of violence seems to have turned. The figures for deaths and casualties are by some way the lowest for five years. The dreadful suffering of the people of the Province may, just possibly, be nearing its end. And above all there is the Middle East, where a star of peace really does at last seem to be illuminating the Holy Land, whose last half-century has been so cruel. It is hubristic to hope for a full settlement in the near future. The Middle Eastern question has been a fine — that is a terrible — example of right meeting right, the classical prescription for historical tragedy. It has been an apt mocking comment on our faithless century that so much blood should have been spilt over the land Christians call Holy and around the city that is sacred to three religions. No one who knows anything about that tragic conflict will imagine that there will be any easy solution. The political realities are one thing, with several of the most powerful Arab states intransigently, as it seems, opposed to any solution short of holy war. Defeat has not softened their resolve to see through the fight with Israel until the end: it has rather hardened it, with the belief that time and the weight of numbers is on the side of the Arabs. On the other side even those kindly disposed towards Israel have grown cool as they see heroic resistance change perceptibly to unreasoning obduracy, as shown by the movement to settle the occupied territories of the 1967 war with Irsaeli zealots. And all of this has been aggravated by the bitterness born of four fierce wars Blood spilt on such a scale congeals — congeals in the minds and hearts of the survivors until it would seem to be as hard as stone. Such historic hatreds, such spilt blood, have about them a lasting quality which makes it seem impossible to wish for a spring of change that will wash away the regret and resentment. Yet something has changed this year, one of those changes in men's hearts which no sceptical cynicism can remove. For decades Arabs and Jews have regarded each other with not merely hostility but incomprehension. This is no time to apportion blame, but of course there was fault on both sides, the final fault of all being a failure to see that the other side had any case at all, that indeed they were fellow men. That is the great barrier Mr Begin and Mr Sadat have crossed, and having crossed it, however far there may be to go, it is difficult to see how there can be a turning back. Everyone must congratulate them on their courage and humanity and hold them in their prayers this Sunday.