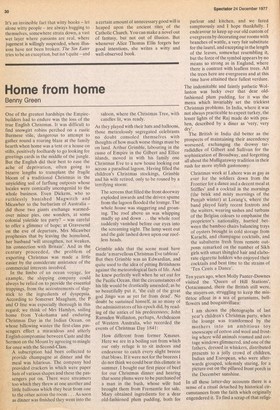 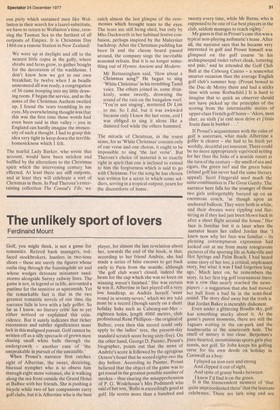 One of the greatest hardships the Empirebuilders had to endure was the loss of the true English Christmas. It was difficult to find snowgirt robins perched on a rustic Burmese stile, dangerous to attempt to gather round a roaring blaze at the family hearth when home was a tent or a house on stilts, positively foolhardy to go looking for greetings cards in the middle of the jungle. But the English did their best to ease the ache of deprivation, often going to bizarre lengths to transplant the fragile bloom of a traditional Christmas in the unyielding soil of farflung outposts whose locales were comically uncongenial to the whole business. Even Dickens, who so ruthlessly banished Magwitch and Micawber to the barbarism of Australia — did those two giants exchange warmedover mince pies, one wonders, at some colonial yuletide tea party? — was careful to offer a glimmer of hope; at Gravesend on the eve of departure, Mrs Micawber prophesies that by leaving the homeland, her husband 'will strengthen, not weaken, his connection with Britain'. And as the century proceeded, the problem of exporting Christmas was made a little easier by the considerate assistance of the commercial interests involved.

In the limbo of an ocean voyage, for example, the shipping company could always be relied on to provide the essential trappings, from the accoutrements of slapstick to the ingredients of dyspepsia. According to Somerset Maugham, the P and 0 line was especially thorough in this regard; we think of Mrs Hamlyn, sailing home from Yokohama and enduring Christmas Day in the Indian Ocean, on whose billowing wastes the first-class passengers effect a miraculous and utterly English compromise between Caste and the Sermon on the Mount by agreeing to mingle for once with the Second-Class.

A subscription had been collected to provide champagne at dinner and the meal was hilarious. The company had provided crackers in which were paper hats of various shapes and these the passengers put on. There, were streamers too which they threw at one another and little balloons which they beat from one to the other across the room. . As soon as dinner was finished they went into the saloon, where the Christmas Tree, with candles lit, was ready.

As they played with their hats and balloons, those meticulously segregated celebrants no doubt consoled themselLes with thoughts of how much worse things must be on land. Arthur Grimble, labouring in the cause of Empire in the Gilbert and Ellice islands, moved in with his family one Christmas Eve to a new house looking out across a paradisal lagoon. Having filled the children's Christmas stockings, Grimble and his wife retired, only to be roused by a terrifying storm: The screens that filled the front doorway exploded inwards and the driven spume from the lagoon flooded the lounge. The whole house was staggering and groaning. The roof above us was whipping madly up and down . . . the whole roof suddenly vanished before our eyes into the screaming night. The lamp went out and the gale lashed down upon our roofless heads.

Grimble adds that the scene must have made 'a marvellous Christmas Eve tableau'. But then Grimble was an Edwardian, and quite used to the idea of pitting Britishness against the meteorological facts of life. And he knew perfectly well when he set out for the Pacific Ocean, that the circumstances of his life would be drastically amended; as he so beautifully put it, 'the cult of the great god Jingo was as yet far from dead'. No doubt he sustained himself, as so many of the administrators of his epoch did, by reading of the antics of his predecessors; John Ramsden Wollaston, perhaps, Archdeacon of Western Australia, who recorded the events of Christmas Day 1841: How different from former Xmases. Here we are in a boiling sun from which our only refuge is to sit indoors and endeavour to catch every slight breeze that blows. If it were not for the breezes! do not think we could bear this climate in summer. I bought our first piece of beef for our Christmas dinner and hearing that some plums were to be purchased of a man in the bush, whose wife had brought them from Fremantle for sale, Mary obtained ingredients for a dear old-fashioned plum pudding, both for parlour and kitchen, and we fared sumptuously and I hope thankfully. I endeavour to keep up our old custom of evergreens by decorating our rooms with branches of wattle, a very fair substitute for the laurel, and excepting in the length of the leaves, somewhat resembling it, but the force of the symbol appears by no means so strong as in England, where there is contrast with leafless trees. All the trees here are evergreens and at this time have attained their fullest verdure.

The indomitable and faintly pathetic Wollaston was lucky over that dear oldfashioned plum pudding, for it was the menu which invariably set the trickiest Christmas problems, In India, where it was not always practicable to expect turkey, the lesser lights of the Raj made do with peahen, described by a diner as 'very, very dry'.

The British in India did better as the prospects of maintaining their ascendency worsened, exchanging the drowsy tarradiddles of Gilbert and Sullivan for the sophistication of Broadway, and forgetting all about the Mulligatawny tradition in their rush for more stylish gastonomy: Christmas week at Lahore was as gay as ever for the soldiers down from the Frontier for a dance and a decent meal at Stiffles' and a cocktail in the mornings (the brisk and misty mornings of the Punjab winter) at Lorang's, where the band played fairly recent foxtrots and the waiters, wearing sashes and turbans of the Belgian colours to emphasise the proprietor's nationality, hurried between the bamboo chairs balancing trays of oysters brought in cold storage from Karachi, and champagne cocktails, and the subalterns fresh from remote outposts remarked on the number of Sikh girls with smart Shingled hair and elaborate cigarette holders who enjoyed their cocktails and beat time to the strains of 'Ten Cents a Dance'.

Ten years ago, when Molly Panter-Downes visited the 'Queen of Hill Stations', Ootacamund, there the British still were, the stayers-on, struggling to keep the mistletoe afloat in a sea of geraniums, bellflowers and bougainvillaea: I am shown the photographs of last year's children's Christmas party, when the lounge was transformed by the mothers into an ambitious toy snowscape of cotton and wool and frosting where wild animals roamed and cottage windows glimmered, and one of the fathers, dressed in whiskers, distributed presents to a jolly crowd of children, Indian and European, who were afterwards grouped, solemnly staring, for a picture out on the pillared front porch in the December sunshine.

In all these latter-day accounts there is a sense of a ritual detached by historical circumstances from the faith which originally engendered it. To find a scrap of that religi ous piety which sustained men like Wollaston in their search for a laurel-substitute, we have to return to Wollaston's time, crossing the Tasman Sea to the furthest of all outposts of Empire. It is Christmas Day 1866 on a remote Station in New Zealand: We were up at daylight and off to the nearest little copse in the gully, where shrubs and ferns grow, to gather boughs for the decoration of the washhouse. I don't know how we got to our own breakfast; by twelve when I as beadle announced all was ready, a congregation of 36 came trooping into my little drawing room. F began the service, and as the notes of the Christmas Anthem swelled up, I found the tears trembling in my eyes. My overwhelming thought was that this was the first time those words had even been said in that valley — you in England can hardly imagine the immensity of such a thought. I had to grasp this idea very tight to keep down the terrible homesickness which I felt.

The tearful Lady Barker, who wrote that account, would have been stricken and baffled by the alterations to the Christmas spirit which the intervening century has effected. At least there are still outposts, and at least they will celebrate a sort of Christmas in them. In Paul Theroux's entertaining collection The Consul's File, we catch almost the last glimpse of the ceremonies which brought tears to the eyes. The tears are still being shed, but only by Miss Duckworth in her habitual festive confusion, perhaps inspired by the Malaysian backdrop. After the Christmas pudding has been lit and the cheese board passed around, the company sings the inevitable seasonal refrain. But it is no longer something out of Hymns Ancient and Modern: Mr Ratnasingham said, 'How about a Christmas song?' He began to sing 'White Christmas' in his trembling Tamil voice. The others joined in, some drunkenly, some sweetly, drowning the sound of the rain on the bungalow roof. 'You're not singing', muttered Dr Lim to me. So I did, but it was awkward because only I knew the last verse, and I was obliged to sing it alone like a damned fool while the others hummed.

The miracle of Christmas, in the truest sense, for as 'White Christmas' consists only of one verse and one chorus, it ought to be impossible to sing 'the last verse'. But Theroux's choice of material is so exactly right in spirit that one is inclined to extend to him the forgiveness which is said to go with Christmas. For the song he has chosen was written for a scene in whichr some soldiers, serving in a tropical outpost, yearn for the discomforts of home.