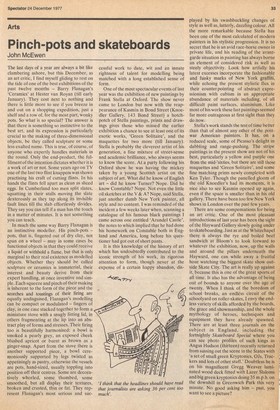 The last days of a year are always a bit like clambering ashore, but this December, as an art critic, I find myself gliding to rest on the tide of one of the best exhibitions of the past twelve months — Barry Flanagan's 'Ceramics' at Hester van Royan (till early January). They cost next to nothing and there is little more to see if you breeze in and out on a shopping expedition, just a shelf and a row of, for the most part, wonky pots. So what is so special? The answer is that there is something so instinctive to the best art, and its expression is particularly crucial to the making of three-dimensional objects, be they called sculpture or some less exalted name. This is true, of course, of anyone who expertly handles materials in the round. Only the end-product, the fulfilment of the intention dictates whether it is a work of art or not. Some years ago on TV one of the last two flint knappers was shown practising his craft of cutting flints. In his hands the flints fell apart as clean as sliced eggs. In Cumberland too men split slates, squatting in their stalls moving the slate dexterously as they tap along its invisible fault lines till the slab effortlessly divides. They say you can tell if a man has the touch in a matter of minutes. It is not something you can teach.

In much the same way Barry Flanagan is an instinctive modeller. His pinch-pots — pots, that is, fingered out of dry clay, not spun on a wheel — may in some cases be functional objects in that they could receive a liquid or withhold a flame, but that is only marginal to their real existence as modelled objects. Whether they should be called sculpture or ceramics is immaterial, their interest and beauty derive from their expert handling, at once inventive and simple. Each squeeze and pinch of their making is inherent to the form of the piece and the scorches and toastings of their firing are equally undisguised. Flanagan's modelling can be compact or modulated — fingers of clay, in one case stacked together to form a miniature stove with a snugly fitting lid, in others fragmenting at the lip into an abstract play of forms and stresses. Their firing too is beautifully harmonised: a bowl is smoked a pearly grey, an exposed cheek blushed apricot or burnt as brown as a ginger-snap. Apart from the stove there is another supported piece, a bowl ceremoniously supported by legs twisted as appetisingly as pastry, otherwise the vessels are pots, hand-sized, usually toppling into position off their centres. Some are decoratively whorled, some thumbed, some smoothed, but all display their textures, broken and crusted, thin or fat. They represent Flanagan's most serious and sue cessful work to date, wit and an innate rightness of talent for modelling being matched with a long established sense of form.

One of the most spectacular events of last year was the exhibition of new paintings by Frank Stella at Oxford. The show never came to London but now with the reappearance of Kasmin in Bond Street (Knoedler Gallery, 143 Bond Street) a hotchpotch of Stella paintings, prints and drawings gives those who missed the earlier exhibition a chance to see at least one of its exotic works, 'Green Solitaire', and the maquettes for two more (till January). Stella is probably the cleverest artist of his generation, a fine mixture of street-sense and academic brilliance, who always seems to know the score. At a party following his Oxford show he was having the mickey taken by a young Scottish artist on the subject of art. What did he know of English art — did he know Turner? Nope. Did he know Constable? Nope. Not even the little oil sketches at the V & A? Nope, said Stella, just another dumb New York painter, all style and no content, I was reminded of the incident a few weeks later when, scanning a catalogue of his famous black paintings I came across one entitled 'Arundel Castle', the notes to which implied that he had done his homework on Constable both in England and America, tong before his questioner had got out of short pants.

It is this knowledge of the history of art which has undoubtedly contributed to the iconic strength of his work, its rigorous attention to form, though never at the expense of a certain happy abandon, dis played by his swashbuckling changes of style as well as, latterly, dazzling colour, All the more remarkable because Stella has been one of the most calculated of modern painters in his stylistic progression. It is no secret that he is an avid race-horse owner in private life, and his reading of the avantgarde situation in painting has always borne an element of considered risk as well as steely objectivity. Look how artfully his latest excesses incorporate the fashionable and funky marks of New York graffiti, while echoing the present stylistic flux in their counter pointing of abstract expressionism with cubism in an appropriate abundance of materials including, of all difficult paint surfaces, aluminium. Like most of his work these last paintings seemed far more outrageous at first sight than they do now.

Stella's work stands the test of time better than that of almost any other of the postwar American painters. It has, on a reduced scale, some of Picasso's delight in dabbling and range-pushing. The stripe paintings in the present show are not of his best, particularly a yellow and purple one from the mid-'sixties, but there are still those maquettes and 'Green Solitaire', and some fine matching prints newly completed with Ken Tyler. Though the panelled gloom of the old Knoedler's had its moments, it is nice also to see Kasmin opened up again, even if the space is smaller than in his old gallery. There have been too few New York shows in London over the past few years.

There are Some compensations for being an art critic. One of the most pleasant introductions of last year has been the sight of the Hayward Gallery slowly going under to skateboarding. Just as at the Whitechapel there is always the rye and boiled beef sandwich at Bloom's to look forward to whatever the exhibition, now, up the walls and around the pillars underneath the Hayward, one can while away a fruitful hour watching the biggest skate show outside Skate City. The art is really up against it, because this is one of the great sports of all time. It also has the advantage of being out of bounds to anyone over the age of twenty. When I think of the boredom of school breaks, an endless circuit of the sahoolyard on roller-skates, I envy the endless variety of skills afforded by the boards, the grace and showmanship, and the whole mythology of heroes, techniques and equipment they have already spawned. There are at least three journals on the subject in England, including the fortnightly Skateboard Special where you can see photo profiles of such kings as Angus Hudson (thirteen) recently returned from sassing out the scene in the States with 'a set of small green Kryptonics, 0J5, Trackers and lots of other stuff.' Doubtless he is on his magnificent Gregg Weaver laminated wood deck fitted with Lazer Slaloms and big green krypton ics doing 35 m.p.h. on the downhill in Greenwich Park this very minute. No good asking him — psst, you want to see a picture?