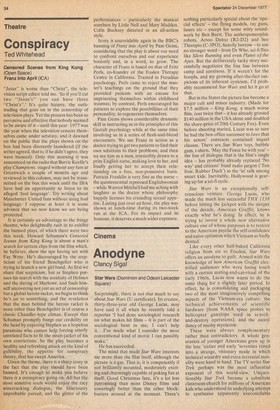 Censored Scenes from King Kong (Open Space) Franz into April (ICA) "Jesus" is worse than "Christ", the television script editor told me, 'So if you'll cut two "Jesus's" you can have three "Christ's".' It's quite bizarre, the oathtrading that goes on in the censorship of television plays. Yet the process has been so pervasive and effective that nobody seemed to be aware Of it — until this year. 1977 was the year when the television censors themselves came under scrutiny, and it dawned on the public that the plays shown on•the box had been discreetly laundered (if the writer agreed, that is; if he didn't agree, they were banned). Only this morning it was announced on the radio that Barrie Keeffe's play Champions, staged without any fuss at Greenwich a couple of months ago and reviewed in this column, may not be transmitted on the box this week until the IBA have had an opportunity to listen to its alleged 'foul language'. Try writing about Manchester United fans without using foul language. I suppose at least it is some advance that we now know we are being protected.

It is certainly an advantage to the fringe theatre, -who delightedly rush in to exhibit' the banned plays, of which there were two this week. Howard Schuman's Censored Scenes from King Kong is about a man's search for certain clips from the film which, he believes, show the ape having sex with Fay Wray. He's discouraged by the scepticism of his friend Benchgelter who is trying to launch a new girl band. At first we share that scepticism, but aS Stephen pursues his search with the assiduity of Holmes and the daring of Marlowe, and finds himself uncovering not just an act of censorship but a global heroin racket, we begin to think he's on to something; and the revelation that the man behind the heroin racket is none other than Benchgelter is of course a classic Chandler-type climax. Except that Schuman promptly bangs our credulity on the head by exposing Stephen as a hopeless paranoiac who cannot help forcing utterly unrelated facts to fit the strait-jacket of his own convictions, So the play becomes a healthy and refreshing attack on the kind of gullibility, the appetite for conspiracy theory, that has swept America.

Given the theme, there is a sharp irony in the fact that the play should have been banned. It's enough to make you believe there is a consspiracy going on. All but the most sensitive souls would enjoy the racy wisecracking dialogue, the hilariously improbable pursuit, and the glitter of the performances — particularly the musical numbers by Little Nell and Mary Maddox. Colin Bucksey directed in an all-action style.

Irony is unavoidable again in the BBC's banning of Franz into April by Pam Gems, considering that the play is about our need to confront ourselves and our experience honestly and, in a word, to grow. The character of Franz is based on that of Fritz Perls, co-founder of the Esalen Therapy Centre in California. Trairied in Freudian psychology, Perk came to reject the master's teachings on the ground that they provided patients with an excuse for imprisoning themselves within childhood traumas; by contrast, Perls encouraged his patients to explore the possibilities of their personality, to regenerate themselves.

• Pam Gems shows considerable dramatic skill in instructing us in the principles of this Gestalt psychology while at the same time involving us in a series of flesh-and-blood encounters. We see Franz in action as a doctor trying to get two patients to find their own solutions to their problems; and then we see him as a man, irresistibly drawn to a prim English nurse, making love to her, and finally getting her to accept their relationshie on a free, non-possessive basis. Patricia Franklin is very fine as the nurse — the quintessential repressed Englishwoman — while Warren Mitchell had me aching with laughter as the doctor whose philosophy happily licenses his crusading sexual appetite. Lasting just over an hour, the play was Shown at lunch-time during its two-week run at the ICA. For its impact and its humour, it deserves a much wider exposure.