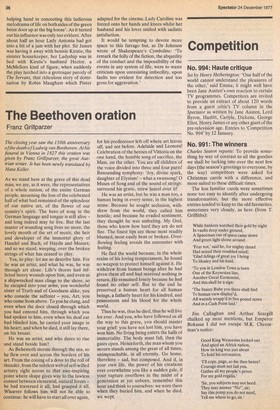 The closing year saw the 150th anniversary ofthe death of Ludwig van Beethoven. At his funeral in Vienna in 1827 this oration was given by Franz Grillparzer, the great Austrian writer. it has been newly translated by Hans Keller.

As we stand here at the grave of this dead man, we are, as it were, the representatives of a whole nation, of the entire German people, mourning the loss of the celebrated half of what had remained of the splendour of our native art, of the flower of our country's spirit. The hero of song in the German language arid tongue is still alive — and long indeed may he live. But the last master of sounding song lives no more, the lovely mouth of the art of music, the heir and developer of the immortal glory of Handel and Bach, of Haydn and Mozart; and so we stand, weeping, over the broken strings of what has ceased to play.

Yes, to play: let me so describe him. For he was an artist, and what he was, he was through art alone. Life's thorns had inflicted heavy wounds upon him, and even as a shipwrecked man clings to the shore, so he escaped into your arms, you wonderful sister of Truth and of Goodness alike, you who console the sufferer — you, Art, you who come from above. To you he clung, and even when the door closed through which you had entered him, through which you had spoken to him, even when his deaf ear had blinded him, he carried your image in his heart; and when he died, it still lay there, on his breast.

He was an artist, and who dares to rise and stand beside him?

As Behemoth storms through the sea, so he flew over and across the borders of his art. From the cooing of a dove to the roll of thunder, from the subtlest web of self-willed artistry right across to that awe-inspiring point where shape giyes way to the lawless contest between elemental, natural forces — he had traversed it all, had grasped it all. Whoever follows him will not be able to continue: he will have to start all over again, for his predecessor left off where art leaves off, and not before. Adelaide and Leonora! Celebration of the heroes of Vittoria on the one hand, the humble song of sacrifice, the Mass, on the other. You are all children of the voice divided into three and four parts! Resounding symphony: 'Joy, divine spark, daughter of Elysium' — what a swansong! 0 Muses of Song and of the sound of strings: surround his grave, strew laurel over it!

He was an artist, but he was a man too, a human being in every sense, in the highest sense. Because he sought seclusion, withdrew from the world, they called him hostile; and because he evaded sentiment, they thought he was unfeeling. My God, those who know how hard, they are do not flee. The finest tips are those most readily blunted, most easily bent or broken. Overflowing feeling avoids the encounter with feeling.

He fled the world because, in the whole realm of his loving temperament, he found no weapon to protect himself against it. He withdrew from human beings after he had given them all and had received nothing in return. He remained lonely because he had found no other self. But to the end he preserved a human heart for all human beings, a fatherly heart for his kindred, and possessions and his blood for the whole world.

Thus he was, thus he died, thus he will live for ever. And you, who have followed us all the way to this grave, you should master your grief: you have not lost him, you have won him. No living being enters the halls of immortality. The body must fall, then the gates open. Henceforth, the man whom you mourn stands among the great of all times, unimpeachable, in all eternity. Go home, therefore — sad, but composed. And if, in your own life, the power of his creations ever overwhelms you like a sudden gale, if your rapture overflows in the midst of a generation as yet unborn, remember this hour and think to yourselves: we were there when they buried him, and when he died, we wept.