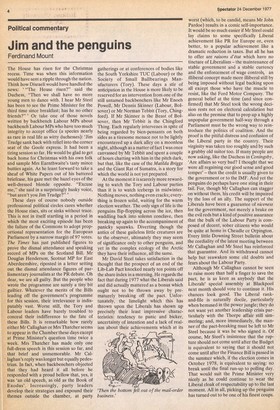 Jim and the penguins

The House has risen for the Christmas recess. Time was when this information would have sent a ripple through the nation. Think how Disraeli would have handled the news: "The House risen?" said the Duchess, "Then we shall have no more young men to dance with. I hear Mr Steel has been to see the Prime Minister for the third time since breakfast; has he no other friends?" ' Or take one of those novels written by backbench Labour MPs about backbench Labour MPs who have too much integrity to accept office (a species nearly as rare in real life as witty duchesses): 'Jim Trudge sank back with relief into the corner seat of the Goole express. It had been a tiring session so far. He would be glad to get back home for Christmas with his own folk and sample Mrs Earnthwaite's tasty mince butties again. As he leant forward to take a sheaf of White Papers out of his battered briefcase, his gaze met the hazel eyes of the well-dressed blonde opposite. "Excuse me," she said in a surprisingly husky voice, "but aren't you Jim Trudge?"' These days of course nobody outside professional political circles cares whether the House rises, sits or sinks without trace. This is not in itself startling in a period in which the most exciting episode has been the failure of the Commons to adopt proportional representation for the European Parliament by a narrow margin of 97 votes. The Times has just published figures to prove the dismal attendance and speaking record of MPs on the Scotland Bill. Mr Douglas Henderson, Scotnat MP for East Aberdeenshire, riposted in a letter setting out the dismal attendance figures of parliamentary journalists at the PR debate. Oh dear, we are all guilty. But the people who wrote the programme are surely a tiny bit guiltier. Whatever the merits of the Bills leading off the government's programme for this session, their irrelevance is indisputably vast. Worse still, the Tory and Labour leaders have barely troubled to conceal their indifference to the fate of these Bills. It is remarkable how rarely either Mr Callaghan or Mrs Thatcher seems to appear in the Chamber these days except at Prime Minister's question time twice a week. Mrs Thatcher has made only one full-dress speech in this session so far, and that brief and unmemorable. Mr Callaghan's reply was longer but equally pedestrian. In fact, when backbenchers objected that they had heard it all before he responded with a proud bellow that, yes, it was 'an old speech, as old as the Book of Exodus'. Increasingly, party leaders develop their strategies and expound their themes outside the chamber, at party gatherings or at conferences of bodies like the South Yorkshire TUC (Labour) or the Society of Small Ballbearings Manufacturers (Tory). These days a stir of anticipation in the House is more likely to be reserved for an intervention from one of the still untamed backbenchers like Mr Enoch Powell, Mr Dennis Skinner (Labour, Bolsover) or Mr Norman Tebbit (Tory, Chingford). If Mr Skinner is the Beast of Bolsover, then Mr Tebbit is the Chingford Thing. Each regularly intervenes in spite of being regarded by bien-pensants on both sides as a tiresome menace not to be lightly encountered up a dark alley on a moonless night, although as a matter of fact I was once canvassed by Mr Tebbit and spent a couple of hours chatting with him in the pitch dark, but that, like the case of the Matilda Briggs and the Giant Rat of Sumatra, is a story for which the world is not yet prepared.

At the moment it is scarcely more rewarding to watch the Tory and Labour parties than it is to watch icebergs in midwinter. Nothing moves, nothing even cracks; everything is frozen solid, waiting for the warm election weather. The only sign of life is the penguins flip-flopping across the ice, then waddling back into solemn conclave, then breaking up again to the accompaniment of panicky squawks. Diverting though the antics of these guileless little creatures are to the observer, ultimately they may seem of significance only to other penguins, and yet in the complex ecology of the Arctic they have their influence, all the same.

Mr David Steel takes satisfaction in the thought that the prospect of an end of the Lib-Lab Pact knocked neatly ten points off the share index in a morning. He regards the fact that during 1977 what the Liberals said and did actually mattered as a bonus which ought not to be thrown away by prematurely breaking off the pact. Unfortunately, the limelight which this has thrown upon the Liberals has shown up precisely their least impressive characteristics: tendency to panic and bicker, uncertainty of intention and a lack of realism about their achievements which at its worst (which, to be candid, means Mr John Pardoe) results in a comic self-importance. It would be so much easier if Mr Steel could lay claims to some specifically Liberal achievement like PR for Europe or, even better, to a popular achievement like a dramatic reduction in taxes. But all he has to offer are raisons d'etat which have no tincture of Liberalism — the maintenance of stable government and a stable currency and the enforcement of wage controls, an illiberal concept made more illiberal still by being imposed without legal backing upon all exeept those who have the muscle to resist, like the Ford Motor Company. The general belief at the time (and since confirmed) that Mr Steel took the wrong decision rests not on electoral calculation but also on the premise that to prop up a highly unpopular government half-way through a Parliament must be the wrong way to reintroduce the politics of coalition. And the proof is the pitiful distress and confusion of the Liberal party in the country. Their virginity was taken too roughly and by such a grubby old suitor too. If many people are now asking, like the Duchess in Coningsby, 'Are affairs so very bad? I thought that we were all regaining our good sense and good temper' — then the credit is usually given to the government or to the IMF. And yet the penguins do perhaps have one sting in their tail. For, though Mr Callaghan can stagger on without them, his credit will be impaired by the loss of an ally. The support of the Liberals have been a guarantee of niceness for the government, not merely a brake on the evil reds but a kind of positive assurance that the bulk of the Labour Party is composed of decent, sober citizens who would be quite at home in Cheadle or Orpington. Every little Downing Street bulletin about the cordiality of the latest meeting between Mr Callaghan and Mr Steel has reinforced that guarantee. And its withdrawal cannot help but reawaken some old doubts and fears about the Labour Party.

Although Mr Callaghan cannot be seen to raise more than half a finger to save the pact, he is as keen as anybody that the Liberals' special assembly at Blackpool next month should vote to continue it. His chances look good. The Liberal rankand-file is naturally docile, particularly when bemused in the power jungle; they do not want yet another leadership crisis particularly with the Thorpe affair still simmering; and, more immediately, the manner of the pact-breaking must be left to Mr Steel because it was he who signed it. Of course, Mr Steel's insistence that the rupture should not come until after the Budget is equivalent to saying that it should not come until after the Finance Bill is passed in the summer which, if the election comes in October 1978, is equivalent to saying: no break until the final run-up to polling day. That would suit the Prime Minister very nicely as he could continue to wear the Liberal cloak of respectability up to the last moment. All in all, picking up the penguins has turned out to be one of his finest coups.