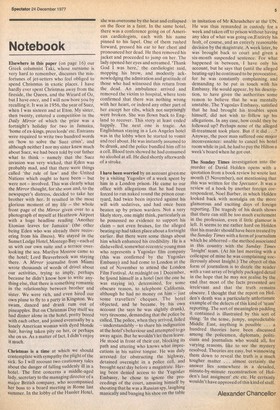 Elsewhere in this paper (on page 16) our Greek columnist Taki, whose surname is very hard to remember, discusses the misfortunes of jet-setters who feel obliged to spend Christmas in exotic places. I have hardly ever spent Christmas away from the fireside, the Queen, and the Wizard of Oz, but I have once, and I will now bore you by recalling it. It was in 1956, the year of Suez, when I was sixteen and at Eton. My sister, then twenty, entered a competition in the Daily Mirror of which the prize was a fortnight's holiday for two in Jamaica, 'home of ex-kings, press lords' etc. Entrants were required to write two hundred words on 'how to solve the Suez crisis', and although neither I nor my sister knew much about Suez, we had been told by our father what to think — namely that the Suez invasion was very wicked, that gden was probably mad, and that there were things called 'the rule of law' and the United Nations which ought to have been — but were not — involved. This was clearly what the Mirror thought, for she won and, to the newspaper's distress, decided to take her brother with her. It resulted in the most glorious moment of my life — the whole front page of the Mirror given over to a photograph of myself at Heathrow Airport with a huge headline reading 'Another Etonian leaves for Jamaica' (the other being Eden who was already there recovering from his illness). We stayed in the Sunset Lodge Hotel, Montego Bay —each of us with our own suite and a terrace overlooking the sea. Marilyn Monroe came to the hotel; Lord Beaverbrook was staying there. A Mirror journalist from Miami wrote thousands of words of drivel about our activities, trying to imply, perhaps because he didn't know how to write anything else, that there is something romantic in the relationship between brother and sister. We were rich, and even hired our own plane to fly to a party in Kingston. We swam, danced and drank rum out of pineapples. But on Christmas Day itself we had dinner alone in the hotel, pretty bored with each other, and joined eventually by a lonely American woman with dyed blonde hair, having taken pity on her, or perhaps she on us. As a matter of fact, I didn't enjoy it much.

Christmas is a time at which we should contemplate with sympathy the plight of the sick. So I will recount two cautionary tales about the danger of falling suddenly ill in a hotel. The first concerns a middle-aged lady, secretary to the managing director of a major British company, who accompanied her boss to a board meeting in Rome last summer. In the lobby of the Hassler Hotel, she was overcome by the heat and collapsed on the floor in a faint. In the same hotel, there was a conference going on of American cardiologists, each with his name pinned to his lapel. One of them rushed forward, pressed his ear to her chest and pronounced her dead. He then removed his jacket and proceeded to jump on her. The lady opened her eyes and screamed. 'Thank God 1 was here,' the cardiologist said, mopping his brow, and modestly acknowledging the admiration and gratitude of those who had witnessed this return from the dead. An ambulance arrived and removed the victim to hospital, where tests confirmed that there was nothing wrong with her heart, or indeed any other part of her except her ribs, which not surprisingly were broken. She was flown back to England to recover. This story at least ended happily. The next one is tragic. An Englishman staying in a Los Angeles hotel was in the lobby when he started to vomit and reel about. He was instantly assumed to be drunk, and the police bundled him off to a cell. Blood tests showed he had consumed no alcohol at all. He died shortly afterwards of a stroke, I have been worried by an account given me by a visiting Yugoslav of a week spent by him in a London prison. He came to our office with allegations that he had been forced to run naked round the prison courtyard, had twice been injected against his will with sedatives, and had once been beaten up by prison warders. Not a very likely story, one might think, particularly as he possessed no evidence to support his claim — not even bruises, for the alleged beating up had taken place about a fortnight earlier. But there were some things about him which enhanced his credibility. He is a dishevelled, somewhat eccentric young man who represents a Yugoslav film company (this was confirmed by the Yugoslav Embassy) and had come to London at the end of November to attend the London Film Festival. At midnight on 1 December, he fpund himself in a hotel (not the one he was staying in), determined, for some obscure reason, to telephone California, although he had no money on him — just some travellers' cheques. The hotel objected, and he became, by his own account (he says he was slightly drunk), very tiresome, demanding that the police be called. The police, when they arrived, failed — understandably — to share his indignation at the hotel's behaviour and attempted to go away again. But he wouldn't let them leave. He stolid in front of their car, blocking its path and uttering who knows what imprecations in his native tongue. He was duly arrested for obstructing the highway, detained overnight in a police cell, and brought next day before a magistrate. Having been denied access to the Yugoslav Embassy, he chose to ignore the proceedings of the court, amusing himself by shouting that he was a Russian spy, laughing manically and banging his shoe on the table in imitation of Mr Khrushchey at the UN. He was thus remanded in custody for a week and taken off to prison without having any idea of what was goinglon.lEntirely his fault, of course, and an entirely reasonable decision by the magistrate. A week later, he was brought back to court and given a six-month suspended sentence. For what happened in between, I have only his account, but he says that (until the alleged beating-up) he continued to be provocative, for he was constantly complaining and demanding to be put in touch with his Embassy. He would appear, by his description, to have given the authorities some reason to believe that he was mentally unstable. The Yugoslav Embassy, satisfied that he had brought his troubles upon himself, did not wish to follow up his allegations. In any case, how could they be followed up? Perhaps none of the alleged ill-treatment took place. But if it did . .? Anyway, the poor man suffered one major inconvenience: unable to cancel his hotel room while in jail, he had to pay the Hilton a week's board when he got out.

The Sunday Times investigation into the murder of David Holden opens with a quotation from a book review he wrote last month (5 November), not mentioning that this was written for the Spectator. It was a review of a book by another foreign correspondent, Noel Barber, in which Holden looked back with nostalgia on the more glamorous and exciting days of foreign reporting. The tragedy of his death shows that there can still be too much excitement in the profession, even if little glamour is left. It seems to me rather hard on Holden that his murder should have been treated by the Sunday Times with a form of journalism which he abhorred — the method associated in this country with the Sunday Times 'Insight' team. (At his last meeting with a colleague of mine he was complaining vociferously about Insight.) The object of this form of journalism is to dazzle the reader with a vast array of brightly packaged detail in the hope that he may not realise by the end that most of the facts presented are irrelevant and that the truth remains obscure. I thought that the report on Holden's death was a particularly unfortunate example of the defects of this kind of 'team' reporting. The sort of meaningless padding it contained is illustrated by this sort of thing: 'In the tense, jumpy, unpredictable Middle East, anything is possible . . a hundred theories have been discussed among the policemen, diplomats, politicians and journalists who would all, for varying reasons, like to see the mystery resolved. Theories are easy, but winnowing them down to reveal the truth is a much tougher matter . . almost certainly the answer lies somewhere in a detailed, minute-by-minute reconstruction of Holden's last assiginene etc etc. He certainly wouldn't have approved of this kind of stuff.