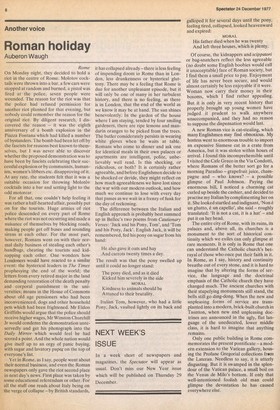 Rome On Monday night, they decided to hold a riot in the centre of Rome. Molotov cocktails were thrown into a bar, a few cars were stopped at random and burned, a pistol was fired at the police, seven people were wounded. The reason for the riot was that the police had refused permission for another riot planned for that evening, but nobody could remember the reason for the original riot. By diligent research, I discovered the reason — it was the eighth anniversary of a bomb explosion in the Piazza Fontana which had killed a number of bystanders. The bomb had been let off by the fascists for reasons best known to themselves, but I was never able to discover whether the proposed demonstration was to have been by fascists celebrating their successful explosion or by communists, humanists, women's libbers etc. disapproving of it. At any rate, the students felt that it was a suitable occasion for throwing Molotov cocktails into a bar and setting light to the odd motorcar.

For all that, one couldn't help feeling it was rather a half-hearted affair, possibly put on for the tourists. Huge armies of riot police descended on every part of Rome where the riot was not occurring and made a nuisance of themselves by blocking roads, making people get off buses and sounding sirens at each other. For the most part, however, Romans went on with their normal daily business of stealing each other's handbags, cheating the tourists and kidnapping each other. One wonders how Londoners would have reacted to a similar event: the hysterical leaders in The Times prophesying the end of the world; the letters from every retired major in the land demanding restoration of the death penalty and corporal punishment in the universities; moans in the House of Commons about old age pensioners who had been inconvenienced, dogs and other household pets which had been frightened. Mr Eldon Griffiths would argue that the police should receive higher wages, Mr Winston Churchill Jr would condemn the demonstration unreservedly and get his photograph into the Daily Mirror which would feel he had scored a point. And the whole nation would give itself up to an orgy of panic buying, with sugar and lavatory paper on the top of everyone's list.

Yet in Rome, as I say, people went about their normal business, and even the Roman newspapers only gave the riot second place in next day's news. First place was taken by some educational referendum or other. For all the stuff one reads about Italy being on the verge of collapse — by British standards, it has collapsed already—there is less feeling of impending doom in Rome than in London, less drunkenness or hysterical gluttony. There may be a feeling that Rome is due for another unpleasant episode, but it will only be one of many in her turbulent history, and there is no feeling, as there is in London, that the end of the world as we know it may be at hand. The sun shines benevolently. In the garden of the house where I am staying, tended by four smiling gardeners, there are ripe lemons and mandarin oranges to be picked from the trees. The butler considerately persists in wearing white gloves when he waits at table. Romans who come to dinner and ask one for identical meals in their own palaces or apartments are intelligent, polite, unbelievably well read. Is this shocking, or ridiculous, or both? It is certainly rather agreeable, and before Englishmen decide to be shocked or deride, they might reflect on how much agreeableness we have lost since the war with our modern outlook, and how much we continue to lose with every day that passes as we wait in a frenzy of funk for the day of reckoning.

The difference between the Italian and English approach is probably best summed up in Belloc's two poems from Cautionary Verses: 'Jack and his Pony, Tom', and 'Tom and his Pony, Jack'. English Jack, it will be remembered, fed his pony on sugar from his hand: He also gave it oats and hay And carrots twenty times a day.

The result was that the pony swelled up until it could no longer stand: The pony died, and as it died Kicked him severely in the side

Kindness to animals should be Attuned to their brutality.

Italian Tom, however, who had a little Pony, Jack, vaulted lightly on its back and