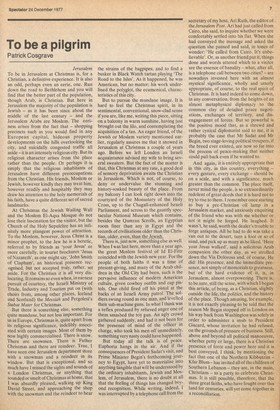 To be a pilgrim

Jerusalem To be in Jerusalem at Christmas is, for a Christian, a definitive experience. It is also an odd, perhaps even an eerie, one. Run down the road to Bethlehem and you will find that the better part of the population, though Arab, is Christian. But here in Jerusalem the majority of the population is Jewish as it has been since about the middle of the last century and the Jerusalem Arabs are Moslem. The eeriness arises from the fact that shopping precincts such as you would find in any European capital, hideous property developments on the hills overlooking the city, and suicidally congested traffic all aside it is an intensely religious city. But its religious character arises from the place rather than the people. Or perhaps it is simply that the religious inhabitants of Jerusalem have different preoccupations from the Christian. His friends, Moslem or Jewish, however kindly they may treat him, however readily and hospitably they may draw his attention to the holy memorials of his faith, have a quite different set of sacred landmarks.

At Christmas the Jewish Wailing Wall and the Moslem El-Aqsa Mosque do not lose their fascination for the visitor, but the Church of the Holy Sepulchre has an infinitely more plangent power of attraction. To the Moslem, however, Jesus Christ is a minor prophet, to the Jew he is a heretic, referred to by friends as 'your Jesus' or more carefully, in tourist brochures 'Jesus of Nazareth', as one might say, 'John Smith of Clapham', an historical presence recognised, but not accepted truly, rather, set aside. For the Christian it is all very dislocating. It remains so even when, in earnest pursuit of courtesy, the Israeli Ministry of Trade, Industry and Tourism put on (with choirs from, among other places, Iceland and Scotland) the Messiah and Pergolesi's Stabat Mater for Christmas.

But there is something else, something quite mundane, but not less important. For us in Europe, Christmas is, quite apart from its religious significance, indelibly associated with certain images. Most of them by now highly commercialised. There is snow. There are snowmen. There is Father Christmas and there are reindeer. True, I have seen one Jerusalem department Store with a snowman and a reindeer in its window. But that is exceptional, and so much have I missed the sights and sounds of a London Christmas, or anything that sounded or smolt of Christmas at hOrne, that I was absurdly pleased, walking up King David Street, and approaching the shop with the snowman and the reindeer to hear the strains of the bagpipes., and to find a busker in Black Watch tartan playing 'The Road to the Isles'. As it happened, he was American, but no matter: his work underlined the polyglot, the ecumenical, characteristics of this city.

But to pursue the mundane image. It is hard to feel the Christmas spirit, in its sentimental, conventional, snow-clad sense if you are, like me, writing this piece, sitting on a balcony in warm sunshine, having just brought out the lilo, and contemplating the acquisition of a tan. An eager friend, of the Jewish or Moslem variety mentioned earlier, regularly assures me that it snowed in Jerusalem at Christmas a couple of years ago. Before we left London an Israeli acquaintance advised my wife to bring several sweaters. But the fact of the matter is that, this Christmas at any rate, a good deal of sensory deprivation awaits the Christian in Jerusalem. Which is not, of course, to deny or undervalue the stunning and history-soaked beauty of the place. From my balcony I can look right down into the • courtyard of the Monastery of the Holy . Cross, 'up to the Chagall-enhanced Israeli Parliament, and across to the gauntly spectacular National Museum which contains, besides the Qumran Scrolls, an Egyptian room finer than any in Egypt and the records of civilisations older than the Christian, older, even, than the Jewish. There is, just now, some-thing else as well. When I was last here, more than a year ago, the great Moslem festival of Id El-Fittr coincided with the Jewish new year. For the people of both faiths it was a time of present-giving, and many of the Arab children in the Old City had been, such is the pervasive influence of modern American minim, given cowboy outfits and cap pistols. One child fired off his pistol at the backs of an Israeli Army patrol. The soldiers swung round as one man, and levelled their sub-machine guns. In what I think was a reflex produced by relieved anger one of them smashed the toy gun. An ugly crowd gathered suddenly, and had it not been for the presence of mind of the officer in charge, who took his men off immediately, something very nasty could have happened. But today all the talk is of peace. Euphoria hangs in the air. And if the consequences of President Sadat's visit, and Prime Minister Begin's forthcoming journey to Egypt, have yet to materialise into anything tangible that will be understood by the ordinary inhabitants, Jewish and Moslem, of Jerusalem, there is no doubt at all that the feeling of things has changed beyond recognition. While writing, indeed, I was interrupted by a telephone call from the secretary of my host, An Rath, the editor of the Jerusalem Post. An had just called from Cairo, she said, to inquire whether we were comfortably settled into his flat. When she had conveyed the message and asked the question she paused and said, in tones of wOnder: `He called from Cairo. It's unbelievable'. Or, as another friend, put it, things done and words uttered which to a visitor are the essence of banality what, after all, is a telephone call between two cities? are nowadays invested here with an almost mystical significance, wholly and utterly appropriate, of course, to the real spirit of Christmas. It is hard indeed to come down, in any conversation,.from the heights of an almost metaphysical diplomacy to the common clay of detailed peace negotiations, exchanges of territory, and disengagement of forces. But so powerful is the positive mood that, as a shrewd and rather cynical diplomatist said to me, it is probably the case that Mr Sadat and MT Begin, two stage-loving political troupers, if the breed ever existed, are now so far into the process of peace-making that neither could pull back even if he wanted to.

And again, it is entirely appropriate that in this city, in this country, everything every gesture, every exchange should be on a scale, and with a significance, much greater than the common. The place itself, never mind the people, is so extraordinarily redolent of great deeds that it is hard not to try to rise to them. I remember once starling to buy a pre-Christian oil lamp in a Jerusalem market, and anxiously enquiring of the friend who was with me whether or not it might be forged. He laughed. It wasn't, he said, worth the dealer's trouble to forge antiques. All he had to do was take a van out to the desert, turn a foot or so of sand, and pick up as many as he liked. 'Here your Jesus walked', said a solicitous Arab companion the other day, as we strolled down the Via Dolorosa and, of course, He did: His presence, and the immediate presence, not simply of memorials to greatness, but of the hard evidence of it, is, in Jerusalem, almost overpowering. There is, to be sure, still the sense, with which I began this article, of being, as a Christian, slightly outside the life, the politics, and the history of the place. Though amusing, for example, it is not exactly pleasing to be told that the reason Mr Begin stopped off in London on his way back from Washington was solely in order to administer a snub to President Giscard, whose invitation he had refused, on the grounds of pressure of business. Still, above and beyond all political manoeuvre, whether petty or large, there is a Christian presence of force and power here and it is best conveyed, I think, by mentioning the fact that one of the Northern Kibbutzim Kfar Blum has invited all of the children of Southern Lebanon they are, in the main, Christians Loa party to celebrate Christmas. It is still possible, therefore, that the three great faiths, who have fought over this land for centuries, will yet come together in a reconciliation.