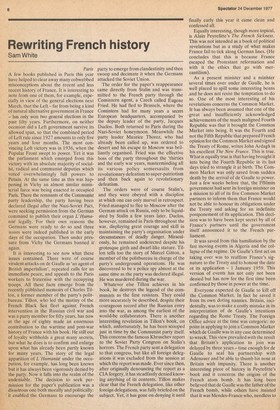 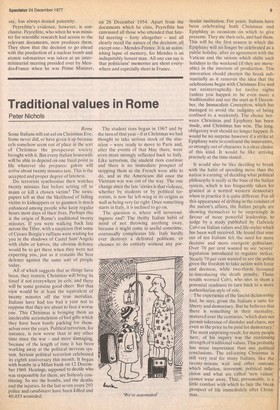 Paris A few books published in Paris this year have helped to clear away many cobwebbed misconceptions about the recent and less recent history of France. It is interesting to note from one of them, for example, especially in view of the general elections next March, that the Left — far from being a kind of natural alternative government in France — has only won two general elections in the past fifty years. Furthermore, on neither occasion did a Left government survive its allowed span, so that the combined period of Left rule since 1927 amounts to only five years and four months. The most convincing Left victory was in 1936, when the Popular Front swept to power. Yet it was the parliament which emerged from this victory with 'an absolute majority of socialist, radical and communist deputies which voted overwhelmingly full powers to Petain. At the same time as this was happening in Vichy an almost similar ministerial farce was being enacted in occupied Paris. There the remnants of the Communist party leadership, the party having been declared illegal after the Nazi-Soviet Pact, were seeking permission from the German command to publish their organ L'Humaniie legally. For their own reasons the Germans were ready to do so and three issues were indeed published in the early days of the occupation. Then under pressure from Vichy the Germans banned it' again.

It is interesting to see now what these issues contained. There were of course virulent attacks on de Gaulle as 'an agent of British imperialism', repeated calls for an immediate peace, and appeals to the Paris workers to fraternise with the occupying troops. All these facts emerge from the recently pbblished memoirs of Charles IiiIon, a former member of the party's politbureau. Tillon, who led the mutiny of the French Black Sea fleet against French intervention in the Russian civil war and was a party member for fifty years, has now at the age of eighty made an enormous contribution to the wartime and post-war history of France with his book. He still out of loyalty withholds a great many secrets, but what he does is to confirm and enlarge upon what has already been partly known" for many years. The story of the legal apparition of L'Ilumanite under the occupation, for example, has long been known but it has always been vigorously denied by the party. Now it falls into the realm of the undeniable. The decision to seek permission for the paper's publication was a disastrous one both morally and politically: it enabled the Germans to encourage the party to emerge from clandestinity and then swoop and decimate it when the Germans attacked the Soviet Union, The order for the paper's reappearance came directly from Stalin and was trans mitted to the French party through the Comintern agent, a Czech called Eugene Fried. He had fled to Brussels, where the Comintern had for many years a secret European headquarters, accompanied by the deputy leader of the party, Jacques Melo& Both returned to Paris during the Nazi-Soviet honeymoon. Meanwhile the party leader Maurice Thorez, who had already been called up, was ordered to desert and his escape to Moscow was brilliantly organised. Fried was the effective boss of the party throughout the 'thirties and the early war years, masterminding all its various policy somersaults from revolutionary defeatism to super-patriotism and then back again to revolutionary defeatism.

The orders were of course Stalin's, and they were obeyed with a discipline at which one can only marvel in retrospect. Fried managed to flee to Moscow after the German attack on Russia, only to be liquidated by Stalin a few years later. Duclos, however, remained in Paris throughout the war, displaying great courage and skill in maintaining the party's organisation under circumstances of deadly danger. Miraculously, he remained undetected despite his grotesque girth and dwarf-like stature. TilIon tells too the story of Marcel Gitton, a member of the politbureau in charge of the party's underground operations. He was discovered to be a police spy almost at the same time as the party was declared illegal. He was murdered during the war.

Whatever else Tillon achieves in his book, he destroys the legend of the communists as the first resisters. They could more accurately be described, despite their courageous record after the Russian entry into the war, as among the earliest of the would-be collaborators. There is another interesting revelation in Tillon's book, on which, unfortunately, he has been scooped just in time by the Communist party itself. This concerns the famous Khruschev report to the Soviet Party Congress on Stalin's horrors. The French party sent a delegation to that congress, but like all foreign delegations it was excluded from the session at which the report was made. Ever since then, after originally denouncing the report as a CIA forgery, it has steadfastly denied knowing anything of its contents. Tilton makes clear that the French delegation, like other foreign delegations, was fully briefed on the subject. Yet, it has gone on denying it until finally early this year it came clean and confessed all.

This was not intended as a book of political revelations but as a study of what makes France fail to tick along German lines. (He concludes that this is because France escaped the Protestant reformation and with it the ethics that go with mercantilism).

As a present minister and a minister several times over under de Gaulle, he is well placed to spill some interesting beans ,and he does not resist the temptation to do so. One of the most interesting of his revelations concerns the Common Market.

It has always been assumed that one of the great and insufficiently acknowledged achievements of the much maligned Fourth Republic was that it brought the Common Market into being. It was the Fourth and not the Fifth Republic that prepared French opinion for the Common Market and signed the Treaty of Rome, writes John Ardagh in his excellent The New France. This is true.

What is equally true is that having brought it into being the Fourth Republic in its last days tried to strangle it at birth. The Com mon Market was only saved from sudden death by the arrival of de Gaulle to power.

Just a few weeks before that, the Pflilmin government had sent its foreign minister on a mission to all of its five Common Market partners to inform them that France would not be able to .honour its obligations under the Treaty and asking for an indefinite postponement of its application. This decision was to have been kept secret by all of France's partners until the government itself announced it to the French parliament.

It was saved from this humiliation by the fast moving events in Algeria and the col lapse of the regime. De Gaulle's first act on taking over was to reaffirm France's signature to the Treaty and to honour the date ot its application — 1 January 1959. This version of events has not only not been denied but has now for the first time been confirmed by those in power at the time.

Everyone expected de Gaulle to kill off the -Common Market. In fact he saved it from its own doting nannies. Britain, inci dentally, was to make a costly mistake in its interpretation of de Gaulle's intentions regarding the Rome Treaty. The Foreign Office advice at the time was categoric: no point in applying to join a Common Market which de Gaulle was in any case determined to wreck. This view prevailed with the result that Britain's application to join was delayed by three years — time enough for de Gaulle to seal his partnership with Adenauer and be able to thumb his nose at Britain with impunity. There is another interesting piece of history in Peyrefitte's book and it concerns the origins of the French atom bomb. It has long been believed that de Gaulle was the father of the French bomb, while others have insisted that it was Mendes-France who, needless to say, has always denied paternity.

Peyrefitte's evidence, however, is conclusive, Peyrefitte, who when he was minister for scientific research had access to the relevant documents, now produces them. They show that the decision to go ahead with the production of a nuclear bomb and atomic submarines was taken at an interministerial meeting presided over by Mendes-France when he was Prime Minister, on 26 December 1954. Apart from the documents which he cites, Peyrefitte has canvassed all those who attended that fateful meeting — forty altogether — and all clearly recall the nature of the decision: all except one — Mendes-France. It is an astonishing lapse of memory, for Mendes is an indisputably honest man. All one can say is that politicians' memories are short everywhere and especially short in France.