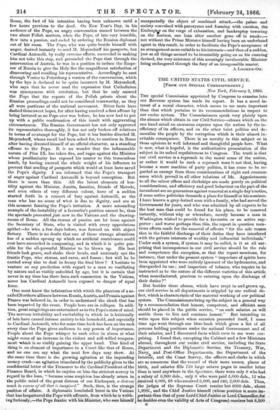 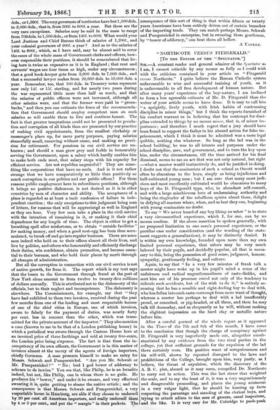 THE special Commission appointed by Congress to examine into our Revenue system has made its report. It has a novel in-.

terest of a moral character, which seems to me more important than that which pertains to its recommendations in respect to our excise system. The Commissioners speak very plainly upon the abuses which obtain in our Civil Service—abuses which on the one hand entail an enormous expense upon the nation by the in- efficiency of its officers, and on the other taint politics and de- moralize the people by the corruption which is their almost in- evitable consequence. There is no novelty in this subject or in these opinions to well informed and thoughtful people here. What is new, what is hopeful, is the authoritative presentation of the subject in its naked repulsiveness to Congress. The truth is that our civil service is a reproach to the moral sense of the nation, or rather it would be such a reproach were it not that, having become a mere machine of party politics, it has come to be re- garded as exempt from those considerations of right and common sense which prevail in all other relations of life. Appointments to all the minor offices and clerkships are made purely on political considerations, and efficiency and good behaviour on the part of the incumbent are no guarantees against removal at a single day's notice, if some active politician demands a place for himself or his nominee. I have known a grey-haired man with a family, who had served the Government for years, and who was admitted by all experts to be the best man that could be found for his place, to be removed instantly, without why or wherefore, merely because a man in Washington wished to provide for a favourite or an active sup- porter ; and worse perhaps than this, the report in question men- tions efforts made for the removal of officers "for the sole reason that in the faithful discharge of their duties they have interfered with the private interests of wealthy and influential individuals." Under such a system, if system it may be called, is it at all sur- prising that incompetence in our civil service should be the rule and competence the exception, so that the report mentions, for instance, that under the present system " inspectors of spirits have been appointed who were entirely ignorant of the hydrometer, and disregarded its use ; and inspectors of tobacco, who require to be instructed as to the nature of the different varieties of this article when manufactured, previous to entering upon the discharge of their duties ?"

But besides these abuses, which have crept in and grown up, our civil service in all departments is crippled by one radical de- fect, which is characteristic of the material working of our political

system. The Commissioners bring up the subject in a general way by a recommendation that honest, competent, and efficient men should be placed in the public service, " on such salaries as will enable them to live and continue honest." But intending to write upon this subject when occasion presented itself, I some time ago went through our blue-book which gives a list of all persons holding positions under the national Government and of their salaries, and I discovered facts which even to me were sur- prising. I found that, excepting the Cabinet and a few Ministers abroad, throughout our entire civil service, including the State Department and the Diplomatic Service, the Treasury, War, Navy, and Post-Office Departments, the Department of the Interior, and the Coast Survey, the officers and clerks in which are so numerous that the record of their mere names, places of birth, and salaries fills 750 large octavo pages in smaller letter than is used anywhere in the Spectator, there were only 8 who had a salary of 6,000 dols., only 6 who were paid 5,000 dole., 12 who received 4,000, 68 who received 3,000, and 340, 2,000 dohs. Thus, the judges of the Supreme Court receive but 6000 dols., about 1,2001., and the Chief Justice himself (whose position is more im- portant than that of your Lord Chief Justice or Lord Chancellor, for he decides even the validity of Acts of Congress) receives but 6,500

dols., or 1,300/. The very governors of territories have but 1,500 dols. to 3,000 dols., that is, from 3001. to 6001. a year. But these are the very rare exceptions. Salaries may be said in the mass to range from 700dols. to 1,500 dols., or from 1401. to 6001. What would your Lord Justices and Chief Barons think of salaries of 1,2001., and your colonial governors of 6001. a year ? And as to the salaries of 1401. to 6001., which, as I have said, may be almost said to cover the cases of the whole mass of Government clerks and officers, how- ever responsible their positions, it should be remembered that liv- ing here is twice as expensive as it is in England ; that rent and servants' wages are four times as high, under any circumstances ; that a good book-keeper gets from 3,000 dots. to 7,000 dols., and that a successful lawyer makes from 20,000 dolts. to 50,000 dols. a year. Remember, too, that 100 dols. in Treasury notes represent now only 141. or 151. sterling, and for nearly two years during the war represented little more than half as much, and that the salaries of public officers were not increased, although all other salaries were, and that the former were paid in " green- backs," and then you can estimate the force of the recommenda- tion that Government should employ competent men on such salaries as will enable them to live and continue honest. The fact is that greater temptations could not be presented to pecula- tion and corruption of all kinds than are presented by our practice of making civil appointments, from the smallest clerkship or messenger's place up, for mere party purposes, paying salaries shamefully small, removing without cause, and making no provi- sion for retirement. For pensions in our civil service are un- known; and should a man grow grey and feeble in honourably serving the Government, upon a salary which hardly enables him to make both ends meet, that salary stops with his capacity for efficient service. Are not republics ungrateful? They are some- thing like corporations that have no souls. And is it not rather strange that we have comparatively so little than positively so much corruption in our politics and our public offices? For these reasons public-employment here in subordinate positions, although it brings no positive dishonour, is not desired as it is in other countries by men of character and ability. The acceptance of a place is regarded as at least a tacit confession of failure in inde- pendent exertion ; the only exceptions to this judgment being men of letters, for reasons that will be appreciate as well in England as they are here. Very few men take a place in the civil service with the intention of remaining in it, or making it their chief dependence for any length of time. The object is either to get a breathing spell after misfortune, or to obtain " outside facilities " for making money, and when a good nest-egg has been thus accu- mulated, to break off and go into regular business. There are some men indeed who hold on to their offices almost all their lives, and live by politics, and others who honourably and efficiently discharge their duties, win confidence, obtain promotion, and become essen- tial to their bureaus, and who hold their places by merit through all changes of administration.

But all the corruption in connection with our civil service is not of native growth, far from it. The report which is my text says that the losses to the Government through fraud at the port of New York alone amount to from twelve to twenty-five millions of dollars annually. This is attributed not to the dishonesty of the officials, but to their neglect and incompetence. The dishonesty is elsewhere. The Commissioners, for example, say that " they have had exhibited to them two invoices, received during the past few months from one of the leading and most respectable houses of one of the chief cities in Europe, one of which invoices, sworn to falsely for the payment of duties, was nearly forty per cent. less in amount than the other, which was trans- mitted for the private account of the importer." They also mention a case (known to me to be that of a London publishing house) in which a periodical was sworn through the Custom House here at an invoiced price of three farthings and sold at twenty five-cents, the London price being sixpence. The fact is that from the in- competency of its own officers, the Government is in this matter of invoices almost at the mercy of the agents of foreign importers, chiefly Germans. A man presents himself to make an entry for Messrs. Schwab and Pumpernickel. " Are you Mr. Schwab or Mr. Pumpernickel ? " " No ; bud I god bower of addorney to schvare to de inwice." You see that, like Philip, he is an Israelite indeed, but not, like Philip, one in whom there is no guile. He produces his " bower," and under it he swears, and very effectual swearing it is, quite putting to shame the native article ; and the consequence is that Messrs. Schwab and Pumpernickel, a very respectable house in Hamburg, are able if they choose to undersell by 20 per cent. all American importers, and really undersell them by 4 or 5 per cent., and put the " margin" in their pockets. The

consequence of this sort of thing is that within fifteen or twenty years Americans have been entirely driven out of certain branches of the importing trade. They can match perhaps Messrs. Schwab and Pumpernickel in enterprise, but in swearing those gentlemen, by " bower-of addorney," can beat them all hollow.