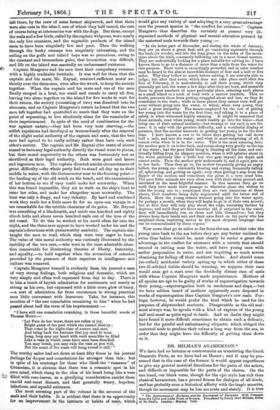 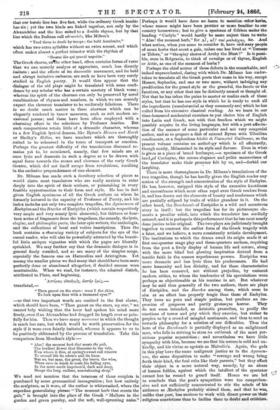 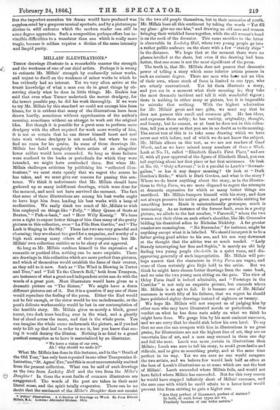 DR. MILMAN'S AGAMEMNON.* WE have had no lectures or controversies

on translating the Greek Dramatic Poets, as we have had on Homer ; and it may be pre- sumed that in the case of the former it would appear superfluous to give any general metrical directions for the parts of the actors, and difficult or impossible for the parts of the chorus. On the one hand, our blank verse, though for the epic style less rich than classical hexameters, has a proved fitness for dialogue of all kinds, and has probably even a historical affinity with the tragic senarius, though its movement may be less accurate and stately. It is true

• The Agamemnon of .cEschylus. and the Bacchanals of Euripides. With Passages from the Lyric and Later Poets of Greece. Trabelated by Henry Hart Wham, Dora of at Paul's. London : Murray. 160.

that our heroic line has five feet, while the ordinary Greek iambic has six ; yet the two kinds are linked together, not only by the Alexandrine and the line suited to a double rhyme, but by that line which the Italians call sdrueciolo, like Milton's

"Trod thorn to death by troops : the bold Asetilonite,"

which has two extra syllables without an extra accent, and which often makes almost a perfect trimeter with the rhythm Of "Beains ille qui preen! negotils."

The Greek chorus, onirhe other hand, often contains forms of verse that we can scarcely analyze or appreciate, much less directly

imitate ; and the effects of its danceable movement, and its bold and abrupt imitative cadences, are such as have been very rarely studied in English poetry. It would thus appear that the dialogue of the old plays might be translated with some confi- dence by any scholar who has a certain mastery of blank verse ; whereas the spirit of the choruses can only be preserved by novel combinations of rhymes and numbers, in which we can scarcely expect the cleverest translator to be uniformly felicitous. There is no doubt much matter in these choruses which can be elegantly rendered in tamer measures, such as suit modern oc- casional poems ; and these have been often employed with a charming effect in the selections by Professor Anstice. But such compositions retain little of a dramatic character, whereas in a few English lyrical dramas, like Byron's Heaven and Earth or Shelley's Hellas, we have numbers which are thoroughly suited to be rehearsed in the tones of transport or emotion. Perhaps the greatest difficulty of the translations discussed re- mains yet to. be mentioned, namely, that few minds are at once lyric and dramatic in such a degree as to be drawn with equal force towards the scenes and choruses of the early Greek theatre, which did not itself escape from revolutions, resulting in the exclusive preponderance of one element.

Dr. Milman has made such a desultory selection of pieces as

would alarm most translators who are really anxious to enter deeply into the spirit of their authors, or painstaking in every Feasible approximation to their form and style. He has in fact

given English specimens of all the Greek authors on whom he formerly lectured in the capacity of Professor of Poetry, and his index includes not only two complete tragedies, the Agamemnon of ./Eschylus and the Bacchx of Euripides (which contain respectively very ample and very scanty lyric elements), but thirteen or four- teen series of fragments from the tragedians, the comedy, the lyric, 'elegiac, and philosophic poets, the later epic writers, the anthologia, and the collections of local and votive inscriptions. Thus the book contains a charming variety of subjects for the eye of the casual reader, who will also be powerfully attracted by the beauti- ful little antique vignettes with which the pages are liberally sprinkled. We may further say that the dramatic dialogue is in general finely versified, and so are many of the simpler songs, especially the famous one on Harmodius and Aristogiton. Yet among the smaller pieces we find many that should have been more perfectly done or abandoned altogether, if decided success were unattainable. When we read, for instance, the admired distich, attributed to Plato, and beginning, Aeripa; etozet)peic, c'ecrrhp 46;,—

-translated,— " Thou gazost on the stars were I the skies, To look upon thee with a thousand eyes !"

—so that two important words are omitted in the first clause, which should have been, " Thou gazest on the stars, my star," we cannot help wishing that .the lover had spoken his mind more

freely, even if an Alexandrine had dragged its length ever so pain- fully for him. Then we have many morceaux in which the thought

is much less rare, bat which would be worth preservation for the style if it were even faintly imitated, whereas it appears to us to be positively obliterated by the process of translation. Take this comparison from Moschus's idyls :- " Alas ! the meanest herb that scents the gale, The lowliest flower that blossoms in the vale, E'en whore it dies, at spring's sweet call renews To second life its odours and its hues.

But we, but man, the groat, the brave, the wise, When once in death he seals his failing eyes, In the mute earth imprison'd, dark and deep, Sleeps the long, endless, unawakening sleep."

We need not mention that the terseness of these couplets is purchased by some grammatical incongruities ; but how entirely the sculpture, as it were, of the author is whitewashed, where the superfine generalizing phrase " The meanest herb that scents the gale," is brought into the place of the Greek " Mallows in the garden and green parsley, and the soft, well-sprouting anise." Perhaps it would have done no harm to mention other bathe, whose names might have been prettier or more familiar to our country housewives ; but to give a specimen of Gibbon under the heading " Carlyle " would hardly be mare unjust than to write " Alas ! the meanest herb," for A!, osT ! rai paXcixect, &c. And what notion, when you come to consider it, have ordinary people of mean herbs that scent a gale, unless one has lived at .‘ Ternato or Tidore," or "the spicy shores of Araby the Blest ?" Is it possi- ble, even in Belgravia, to think of cowslips or of thyme, English or Attic, as one of the meanest of herbs ?

Perhaps the chief source of these defects is the remarkable, and indeed unprecedented, daring with which Dr. Milumn has under- taken to translate all the Greek poets that came in his way, except Homer, Sophocles, and one or two more, without indulging any predilection for the grand style or the graceful, the facete or the facetious, or any other that can be distinctly named or thought of. Not that he has taken the pains to master or realize each of these styles, but that he has one style in which he is ready to cook all the ingredients (unsubstantial as they commonly are) which he has culled from his extensive classical reading. As we learn in our time-honoured academical exercises to put choice bits of English into Latin and Greek, not• with that freedom which we might possibly acquire in the living languages, but with a pert affecta- tion of the manner of some particular and not very congenial author, and so to prepare a dish of minced Byron with Tibullian condiments, or a Sophoclean hilchis de rimmortel Guillaume, so the present volume contains an anthology which is all effectually, though neatly, Milmanized in its style and flavour. Even in what • is given as a piece of broad burlesque,—a specimen of the Greek land,of Cockayne, the serene elegance and polite mannerisms of the translator make their presence felt by us, and—forbid our laughing.

There is more thoroughness in Dr. Mamma's translations of the two tragedies, though he has hardly given the English reader any notion of the strength and concentration of the style of Eschylus. He has, however, stripped this style of the excessive knottineas and uncouthness which must often repel even Greek readers from it, and has drawn out the elements of beauty and tenderness which are partially eclipsed by traits of wilder grandeur in it. On the other hand, the Bacchanals of Euripides is a wild and monstrous story in itself ; but the tragedian has for its picturesque ele- ments a peculiar relish, into which the translator has cordially entered; and it is perhapsin this performance that he has most nearly done justice to his original. The two plays are judiciously brought together to contrast the earlier form of the Greek tragedy with a later, and we believe, a more consistently artistic development. The institutions to which the drama owed its origin made it at first one-quarter stage play and three-quarters anthem, requiring from the poet a lively display of human life and nature, along with the more blind but glowing inspiration derived from a terrific faith in the unseen superhuman powers. Euripides was more dramatic and less lyric than his predecessors. He had more humanity and less divinity, and for these characteristics he has been censured, not without prejudice, by eminent modern critics, to whom the tendencies of his speculations were perhaps as objectionable as his maxims iu art. But whatever may be said thus generally of the two authors, there are plays of Euripides, and the Bacchm among them, which seem to aim at an effect less properly tragic than those of Eschylus. They have no pure and simple pathos, but produce an im- pression of gorgeous and partly grotesque horror. They do not seem intended, as Aristotle prescribes, to purify the emotions of terror and pity which they exercise, but rather to perplex us by a crowd of mingled sentiments, and thus to send us towards philosophy for a solution of our difficulties. Thus the hero of the Bacchanals is partially displayed as an enlightened man, who falls in striving to stem an outbreak of the most per- nicious popular superstition ; and nevertheless we have little sympathy with him, because we see that his nature is cold and un- kindly, and his virtue as egoistic as Malvolio's. Again, the gods in this play have the same malignant justice as in the Agamem- non, the same disposition to make " revenge and wrong bring forth their kind, the foul cubs like their parents," but they effect their object in a more natural way, namely, by an abuse of human foibles, against which the intellect of the spectator cannot but be roused to guard itself. Hence we are led to conclude that the poet's sympathies were too comprehen- sive and not sufficiently concentrated to stir the minds of his audience as 2Eschylus probably stirred them, and that he was, unlike that poet, less anxious to work with direct power on their religious convictions than to incline them to doubt and criticism.

But the imperfect sensation his drama would have produced was supplemented by a gorgeous-mnsical spectacle, and by a picturesque diction in wild cadences which the modern reader can still in some degree appreciate. Such a composition perhaps offers less in- vincible difficulties to a translator than one which is really more tragic, because it seldom requires a diction of the same intensity and limpid purity.