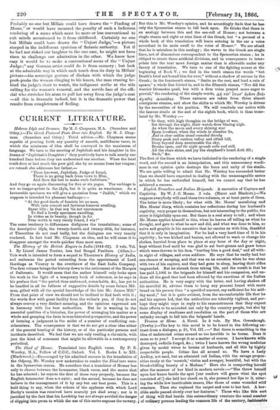 Hebrew Idyls and Dramas. By M. J. Chapman, M.A. (Saunders and Otley.)—The Greek Pastoral Poets Done into English. By M. J. Chap- man. (Saunders and Otley.) Third edition.—Mr. Chapman seems capable of pouring forth any quantity of smooth, mellifluous verse, in which the minimum of idea shall be conveyed in the maximum of language. We turn to the meeting of Jephthah and his daughter in the drama of "Jephthah's Daughter;" they positively have to talk nearly one hundred lines before they can understand one another. When the fatal truth does at last reach the poor girl, she by no means loses her tongue ; ore rotundo she addresses her father,—

" Thou knowest, Jephthah, Judge of Israel, There is no going back from vows to Him, And thou the last to make such forfeiture."

And they go on again discoursing for five or six pages. The verbiage is not so inappropriate in the idyls, but it is quite as wearisome. As a favourable specimen we will give a quotation from "Judith," which we suppose is intended for pleasant badinage :— " At the good deeds of feminie let no man, With vain conceit and fastuous humour swelling,

Sneer idly; in that sex 'tie not uncommon

To find a lovely specimen excelling,

In virtue as in beauty, though in his

True worth is very rarely found, I wis !"

The same tendency to diffuseness disfigures the translations ; some of the descriptive idyls, the twenty-fourth and twenty-fifth, for instance, of Theocritus do not read badly, but the dialogues are very tamely rendered. In fact lend Mr. Chapman an idea, and he will cause it to disappear amongst the words quicker than most men.