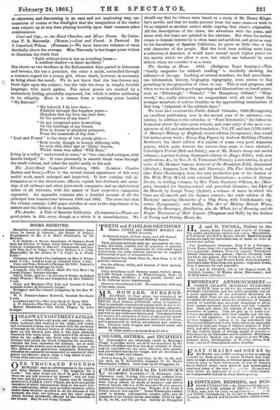 We have also received the Public Schools' Calendar, 1866 (Rivingtona),

an excellent publication, now in the second year of its existence, con- taining, in addition to the calendar, or "Fasti Scholastici," the fullest in- formation about the nine great schools, and some sixty of the most con- spicuous of old and and modern foundation; VoL IV. and last (1795-1801) of Massey's History of England, second edition (Longman), that sound but rather prosy work ; Every-Day Papers, by Andrew Halliday (Tinsley Brothers), the third edition of a reprint of some very good magazine papers, which quite deserve the success they seem to have attained ; Coleridge's Friend (Bell and Daldy), one of Mr. Bohn's cheap and useful 'volumes; a pretty-looking illustrated edition of £sop's Fables, with new applications, &c., by Rev. F. G. Townsend (Warne); a new edition, in good taste, of Mr. Holmes' famous Autocrat of the Breakfast-Table, illustrated (Strahan ; Sampson Low, Son, and Marston); The Two Schoolgirls, and other Tales (Rontledge), from the very productive pen of the Author of The Wide Wide World with coloured illustrations ; a series of Cottage Stories, in shilling volumes, by Mrs. Vidal, Charlotte O'Brien, &c. (Mor- gan), intended for Sunday-school and parochial libraries ; the Idyls of the Hearth, by Joseph Vesey (Aylott), a volume of verso in which the lines are all smooth and the rhymes correct ; the sixth edition of Mr.

Hoskyns' amusing Chronicles of a Clay Farm, with Cruikshank's vig- nettes (Longmans) ; and finally, The Art of Making British Wines, Recipes for Beverages, Distillation, also the Whole Art of Brewing, and the Proper Treatment of Malt Liquors (Chapman and Hall), by the Author of Curing and Potting Meats, Ate.