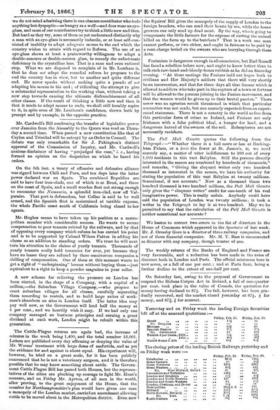 Mr. Cardwell's Bill confirming the transfer of legislative power over

Jamaica from the Aksembly to the Queen was read on Thurs- day a second time. When passed a new constitution like that of Ceylon and Trinidad will be octroye by an Order in Council. The -debate was only remarkable for Sir J. Pakington's distinct approval of the Commission of Inquiry, and Mr. Cardwell's anxious disclaimer of having "prejudged the case," i. e., having formed an opinion on the despatches on which he based his -orders.