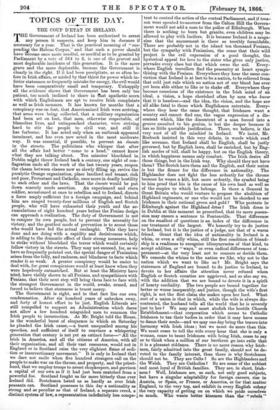 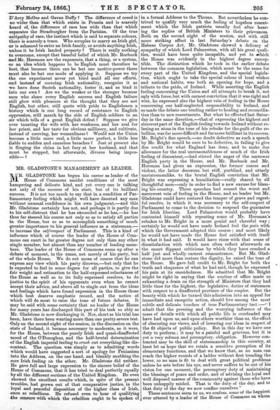 THE COUP D'ETAT IN IRELAND THE Government of Ireland has been authorized to arrest any person it suspects, and keep him in durance if necessary for a year. That is the practical meaning of " sus-, pendinf the Habeas Corpus," and that such a power should have become once mote needful, so needful as to be granted by Parliament by a vote of 364 to 6, is one of the gravest and most deplorable incidents of this generation. It is the more grave and the more deplorable, because the Government is clearly in the right. If it had been precipitate, as so often be- fore in Irish affairs, or misled by that thirst for power which in- ferior statesmen so frequently mistake for energy, the evil would have been comparatively small and temporary. Unhappily all the evidence shows that Government has been only too patient, too much inclined to share in that apathetic scorn with which Englishmen are apt to receive Irish complaints as well as Irish menaces. It has known for months that a conspiracy was on foot, that Americanized Irish were arriving, that arms were being collected, that a military organization had been set on foot, that men, otherwise respectable, of blameless lives, and unimpeached character, were striving hard to stir the people to civil war, and still it has forborne. It has acted only when an outbreak appeared imminent, and has even now acted in the most moderate way. It was essential, if possible, to prevent an bneute in the streets. The politicians who whisper that after all the affair had better " come to a head," cannot know what they are talking about. Ten minutes' bloodshed in Dublin might throw Ireland back a century, one night of con- flagration undo all the work of the last twenty years, reopen the chasm between classes now so slowly filling up, revive the paralytic Orange organization, place landlord and tenant, rich and poor, Protestant and Catholic, once more in deadly hostility to each other and the laws. That the e'meute would be put down scarcely needs assertion. An experienced and stern soldier, accustomed at once to rebellion and to Ireland, directs a force amply sufficient for a foreign campaign, and behind him are ranged twenty-four millions of English and Scotch people, who will have exhausted their youth and the ac- cumulations of eight hundred years before the Fenian design can approach a realization. The duty of Government is not to conquer its own people, but to prevent the necessity for victory, and the gentlest mode of prevention is to arrest those who would have led the actual onslaught. This they have done and are doing with a rapidity and decisiveness which, in adding to the dramatic effect of their strong measures, help to strike without* bloodshed the terror which would certainly follow victory in the streets. They may not succeed, for, as we have so frequently pointed out, the special danger of Fenianism arises from the folly, and rashness, and blindness to facts which render it so weak. A greater conspiracy would be easier to deal with, for great conspirators would at least know when they were hopelessly outmatched. But at least the Ministry have tried, have visibly shown to all Fenians, and sympathizers with Fenians, that their next step will bring them face to face with the strongest Government in the world, awake, armed, and forced to believe that sternness is truest mercy.

D'Arey McGee and Govan Duffy V The difference of creed is no wider than that which exists in Prussia and is scarcely heard of, the difference of race less wide than that which separates the Strasburgher from the Parisian. Of the true antipathy of race, the instinct which is said to separate colours, there is scarcely a trace. Who scruples to marry an Irish girl, or is ashamed to enter an Irish family, or avoids anything Irish, unless it be Irish landed property I There is really nothing to overcome, except that baneful belief of which Mr. Roebuck and Mr. Horsman are the exponents, that a thing, or a system, or an idea which happens to be English must therefore be best, that because there can be but one motive-power there must also be but one mode of applying it. Suppose we try the one experiment never yet tried amid all our efforts, and instead of coercing Irish nationality, recognize it as we have done Scotch nationality, foster it, and so bind it into our own V Are we the weaker or the stronger because men who share every English success and English failure still glow with pleasure at the thought that they are not English, but other, still quote with pride to Englishmen a history which is one long record of resistance to English oppression, still march by the side of English soldiers to an air which tells of a great English defeat ? Suppose we give over taunting the wife with her weakness, and her zeal for her priest, and her taste for obvious millinery, and cultivate, instead of coercing, her womanliness ? Would not the Union become a little more real, a little more perfect, a little less liable to sudden and causeless breaches Just at present she is flinging the china in hot fury at her husband, and that must be stopped, but afterwards, divorce being impos- sible— ?