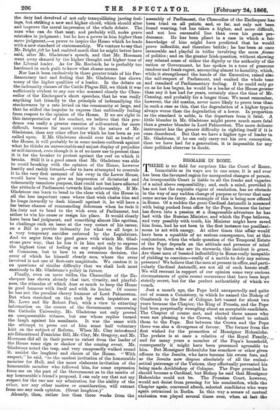 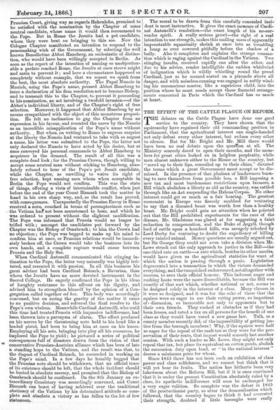 BISMARK IN ROME. T HERE is no field for surprises like

the Court of Rome. Immutable as its ways are in one sense, it is and ever has been the favoured region for unexpected changes of person. An irresponsible Court is liable to all the freaks and vagaries of a mind above responsibility; and, such a mind, provided it has not lost the requisite vigour of resolution, has no obstacle in the way of any sudden change of purpose or favour that may come across its fancy. An example of this is being now offered in Rome. Of a sudden the great Cardinal Antonelli is menaced with being pushed from office by the Pope, because the latter has flown into a passion at a. disagreeable adventure he has had with the Russian Minister, and which the Pope believes, and very possibly with truth, his Minister might have saved him from, had he not been in the first instance too pusillani- mous to act with energy. At other times this affair would have been a squabble of no serious consequence, but at this. conjuncture, when the whole question of the Temporal Estate of the Pope depends on the attitude and presence of mind shown by those who are its stewards, this incident is grave. Are these men of boasted inflexibility in Romereally incapable of yielding to coercion—really of a mettle to defy any serious pressure? We believe that the men at present in office, and parti- cularly Cardinal Antonelli, are not all of such heroic stuff. We will recount in support of our opinion some very curious circumstances of quite recent occurrence that have been kept strictly secret, but for the perfect authenticity of which we vouch.

Just a month ago, the Pope held unexpectedly and quite out of season a Consistory, in which he named the Bishop of Osnabruck to the See of Cologne, left vacant for about two- years because the Chapter, the King of Prussia; and the Pope had been perpetually wrangling about an acceptable candidate. The Chapter of course met, and elected three names who were not pleasing to the Crown, which refused to submit them to the Pope. But between the Crown and the Pope there was also a divergence of favour. The former from the- first wished for the promotion of Monsignor Hohenlohe. The prelate is at once a relative of the Royal Family, and for many years a member of the Pope's household, consequently it might have been presumed agreeable to him. But Monsignor Hohenlohe has somehow or other given offence to the Jesuits, who have b000me his sworn foes, and as the Jesuits now dispose absolutely of all the ecclesi- astical patronage of the Vatican, they effectually prevented his being made Archbishop of Cologne. The Pope promised he should become a Cardinal, but Bishop he said that Monsignor Hohenlohe could not be. The Prussian Court, however, would not desist from pressing for his nomination, while the Chapter again, convened afresh, selected candidates who were again ostracized in Berlin. In this way a seesaw of mutual exclusion was played several times over, when at last the Prussian Court, giving way as-regards Holienkthe, promised to be satisfied with the nomination by the Chapter of some neutral candidate, whose name it, would then recommend to the. Pope. But in Rome the Jesuits had a pet candidate, whom they were bent on bringing to this see. Now the Cologne Chapter manifested an intention, to respond to the peacemaking wish of the Government, by selecting the well known Benedictine Abbot Haneberg, an ecclesiastic of distinc- tion, who would have been willingly accepted in. Berlin. As soon as the report of the intention of naming so unobjection- able a prelate reached Rome, the Jesuits at once strove might and main to prevent it ; and here a circumstance happened so completely without example, that we repeat we speak from the best, the most absolute authority. The Papal Nuncio in Munich, using the Pope's name, pressed Abbot Haneberg to issue a declaration of his firm resolution not to become Bishop, and to transmit this to the Chapter, to prevent it proceeding to his nomination, an act involving a twofold invasion—of the Abbot's individual liberty, and of the Chapter's right of free selection. Moreover, it happened that Abbot Haneberg by no means sympathized with the object of this monstrous proposi- tion. He felt no inclination to gag the Chapter from an expression in his favour, and resented the move by the Nuncio as an incredible misapplication of the Pope's name without authority. But when, on writing to Rome to express surprise at the liberty the Nuncio had ventured to take with so august a name, his letter was submitted to the Pope, the latter not only declared the Nuncio to have acted by his desire, but at once conveyed his personal commands to Abbot Haneberg to acquiesce in the demand. The result of all this was a complete dead lock ; for the Prussian Crown, though willing to accept some neutral man without sticking to Haneberg, abso- lutely refused to hear of the Pope's pet Jesuit candidate, while the Chapter, as unwilling to waive its right of free selection, kept naming men whom when acceptable in Berlin the Pope would not confirm. This was the state of things, offering a vista of interminable conflict, when just before the end of the year Count Bismark took the matter in hand in his own sharp way, and, as the result has proved, with consequences. Unexpectedly the Prussian Envoy in Rome received a note, couched in terms of peremptoriness such as -the Vatican hadinot been accustomed to hear, and which he was, ordered to present without the slightest modification. The Pope was informed that Prussia would no longer be trifled with ; amongst the candidates put forward by the Chapter was the Bishop of Osnabruck ; to him the Crown had no objection ; the Pope was begged to make up his mind to confirm him at once, or Prussian relations would be immedi- ately broken off, the Crown would take the business into its own hands, and a complete rupture would ensue between Prussia and the Holy See.

When Cardinal Antonelli communicated this stinging in- timation to the Pope, the latter very naturally was highly irri- tated, and resented it with passion. In all this business his great adviser had been Cardinal Reisach, a Bavarian, than whom the Jesuits have no more devoted instrument in the Sacred College. He eagerly confirmed the Pope in his ideas of haughty resistance to this affront on his dignity, and advised him to strengthen himself by the opinion of a Con- gregation called together ad hoc. This body was accordingly convened, but on seeing the gravity of the matter it came to no positive decision, and referred the final resolve to the Pope's own wisdom. Meanwhile Cardinal Antonelli, who until this time had treated Prussia with impassive indifference, had been thrown into a paroxysm of alarm. The effect produced on his nerves by the threatening note held to his head like a loaded pistol, had been to bring him at once on his knees. Employing all his arts, bringing into play all his resources, he implored the Pope to yield ; he pictured a series of political consequences full of disasters drawn from the vision of that conservative Prussian-Austrian alliance which has been of late a standing hope to the Vatican, and the result was that, to the disgust of Cardinal Reisach, he succeeded in working on the Pope's mind. In a few days he humbly begged that the Prussian note should be withdrawn, that no official trace of its existence should be left, that the whole incident should be buried in absolute secrecy, and promised that the Bishop of Osnabruck should be confirmed. On the 8th January an ex- traordinary Consistory was accordingly convened, and Count Bismark can boast of having achieved over the traditional obstinacy of the Vatican by his determined attitude so com- plete and absolute a victory as has fallen to the lot of few statesmen, The moral to be drawn from this carefully concealed inci- dent is most instructive. It gives the exact measure of Cardi- nal Antonelli's resolution—the exact length of his no-sur- render spirit. A really serious growl—the, sight of a real intention to use strength, makes this smiling mass of apparently impenetrable equanimity shrink at once into as trembling a. lump as ever cowered pitifully before the shadow of a bully. Also it completes and explains the strange commo- tion which is raging against the Cardinal in the Vatican. Two stinging insults, received rapidly one after the ether, and due to his advice, render intelligible the sudden whirlwind of indignation which is wildly whistling round the proud Cardinal, just as he seemed. seated on a pinnacle above all danger, and with noiseless cunning was engaged in softly wind- ing his unconscious master, like a capricious child, into the position where he must needs accept those financial arrange- ments concocted in Paris which the Cardinal has so much at heart.