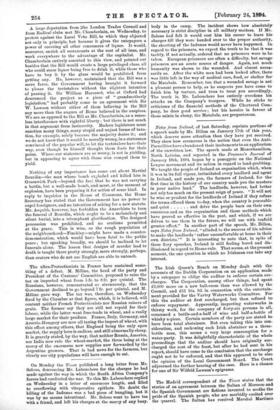 Page 2, 24 February 1894 — Nothing of any importance has come out about Martial Bourdin—the
Close

Nothing of any importance has come out about Martial Bourdin—the

man whose bomb exploded and killed him in Greenwich Park—beyond the fact that he was not carrying a bottle, but a well-made bomb, and must, at the moment of explosion, have been preparing it for action of some kind. In reply to inquiries in the House of Commons, the Home Secretary has stated that the Government has no power to expel foreigners, and no intention of asking for a new statute. Mr. Asquith, however, has forbidden the Anarchists to turn the funeral of Bourdin, which ought to be a melancholy and ailent burial, into a triumphant glorification. The designed procession was prohibited, and no orations permitted at the grave. This is wise, as the rough population of the neighbourhood—Finchley—might have made a counter- demonstration, which would have been fatal to the public peace ; but speaking broadly, we should be inclined to let funerals alone. The lesson that designs of murder lead to death is taught there pretty strongly, more strongly, perhaps, than orators who do not use English are able to unteach.