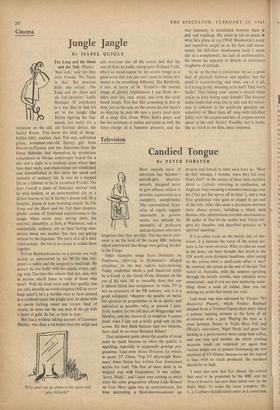 By ISABEL QUIGLY The Long and the Short

and the Tall. (Plaza.) `BAD luck,' said my film critic friends. 'No Nazis in that.' But precious little else either. The Long and the Short and the Tall (director: Leslie Norman; 'X' certificate) is a war film in that it's set in the jungle (the British fighting the Jap- anese), but really it's a variation on the old, old fictional device, the Sealed Room. You know the kind of thing: Indian fakir, cockney char, film star, unfrocked priest, seventeen-year-old factory girl from Barrow-in-Furness and two fishermen from the Outer Hebrides find themselves by mysterious coincidence or Divine contrivance locked for a day and a night in a confined space where they bare their souls, and relationships are established and disestablished at five times the speed and intensity of ordinary life. It may be a trapped lift or a lifeboat or (as in Leonhard Frank's The Last Coach) a piece of funicular railway with its wire broken; or an atom-bombed city or a dream heaven or (as in Sartre) a dream hell. Or a hospital, prison or even boarding school. In The Long and the Short and the Tall their claustro- phobic corner of frustrated explosiveness is the jungle where seven men, among them, for national jokeability, a Scot, a Welshman, and a nationalistic cockney, are so busy feeling mur- derous about one another that they end getting minced by the Japanese. The point of it all is their relationships: the war is an excuse to isolate them together.

Private Bamforth carries on a private war with society as represented by his NCOs (the cor- poral's a sadist and the sergeant a weakling). He doesn't do too badly with his equals, either, rail- ing with Thersites-like venom (but not, alas, wit) at anyone who'll listen or even at those who won't. With his loud voice and that quality you can only describe as everlastingness (will he never keep quiet?) he's a terrible man to have around in a confined space (the jungle hut), let alone with an enemy lurking round any corner. And, of course, he turns out the one man of the lot with a heart of gold. So far, so true to type.

But that's without taking account of Laurence Harvey, who does a lot better than the script and 'Why don't we go down to my place and play billiards?' acts everyone else off the screen (not that the rest of them do badly, except poor Richard Todd, who's so handicapped by his screen image as a good scout that you just can't seem to realise he's meant to be something different). His Bamforth, a sort of terror of St. Trinian's—the nearest image of gleeful frightfulness I can think of— takes over hut, cast, script, and even the card- board jungle. You feel like screaming to him to stop, just as the men on the screen do, but there's no denying he puts life into a pretty dead duck of a stagy film (from Willis Hall's play), and has his moments of pathos and point as well. He takes charge of a Japanese prisoner, and the way humanity is established between them is deft and touching. His satire is not so much in what he's given to say (Wolf Mankowitz's noisy and repetitive script) as in his face and move- ments, his full-blast tastelessness (and 1 mean this as a compliment), his lack of sentimentality, his innate (as opposed to (littlish or histrionic) toughness of attitude.

As far as the war is concerned, we see a good deal of physical violence and squalor, but the detail is unconvincing; and what, out of it all, is it trying to say, meaning us to feel? That war's futile? That hating your enemy's absurd when you're so busy hating your friends? The director seems undecided what line to take and his indeci- sion is reflected in the positively ghoulish un- suitability of 'Bless them all' sung with full-blast jollity over the corpses and bits of corpses strewn about at the end. Satire? Possibly, but it looks, like so much in the film, sheer. .ineptness.