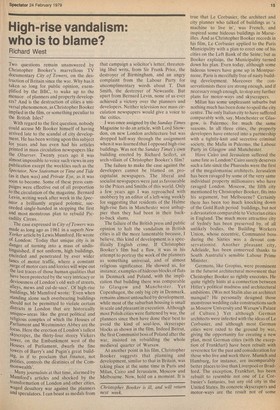 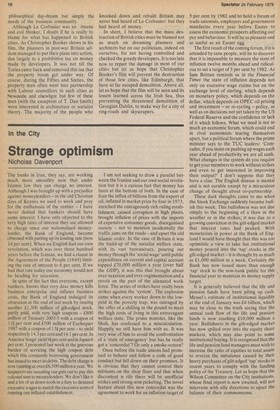 High-rise vandalism: who is to blame?

Two questions remain unanswered by Christopher Booker's marvellous TV documentary City of Towers, on the destruction of Britain since the war. Why has it taken , so long for public opinion, exemplified by the BBC, to wake up to the menace. of planners and property developers? And is the destruction of cities a universal phenomenon, as Christopher Booker implied in the film, or something peculiar to the British Isles?

With regard to the first question, nobody could accuse Mr Booker himself of having arrived late to the scandal of city development. He has been writing upon this subject for years and has even had his articles Printed in mass circulation newspapers like the Observer. Twenty years ago it was almost impossible to voice such views in any Publication except the weeklies such as the Spectator, New Statesman or Time and Tide (as it then was) and Private Eye, as it was soOn to become. Some of these press campaigns were effective out of all proportion to rhesirculation of the. magazine.. Bernard Levin, writing week after week in the Spectator a brilliantly argued polemic, succeeded single-handed in stopping the first and most monstrous plan to rebuild Piccadilly Circus.

The case expressed in City of Towers was made as long ago as 1961 in a superb New Yorker article by Lewis Mumford. He wrote of London: 'Today that unique city is in danger of turning into a mass of undistinguished, if not uniform, high buildings, encircled and penetrated by ever wider lanes of motor traffic, where a constant surge of motor cars and lorries will wipe out the last traces of those human qualities that have been protected by the very intricacy or deviousness of London's old web of streets, alleys, mews and cul-de-sacs'. Of high-rise buildings, Mr Mumford wrote: 'Even when standing alone such overbearing buildings should not be permitted to violate certain districts in London that are historically unique— areas like the great political and religious complex of which the Houses of Parliament and Westminster Abbey are the focus. Here the erection of London's tallest Skyscraper, the thirty-four storey Vickers tower, on the Embankment west of the Houses of Parliament, dwarfs the fine towers of Barry's and Pugin's great building, as if to proclaim that finance, not Politics, controls the destinies of the Commonwealth'.

Many journalists at that time, alarmed by Mumford's articles and shocked by the transformation of London and other cities, waged desultory war against the planners and speculators. I can boast as medals from that campaign a solicitor's letter, threatening libel writs, from Sir Frank Price, the destroyer of Birmingham, and an angry complaint from the Labour Party for uncomplimentary words about T. Dan Smith, the destroyer of Newcastle. But apart from Bernard Levin, none of us ever achieved a victory over the planners and developers. Neither television nor mass circulation newspapers would give a voice to the critics.

I was once assigned by the Sunday Times Magazine to do an article, with Lord Snowdon, on new London architecture but was dropped half-way through the assignment when it was learned that I opposed high-rise buildings. Was not the Sunday Times's own building erected by Richard Seifert, an arch-villain of Christopher Booker's film?

The failure to make the case against the developers cannot be blamed on procapitalist newspapers. The liberal and socialist newspapers were just as favourable to the Prices and Smiths of this world. Only a few. years ago I was reproached with snobbery by an editor of a left-wing weekly for suggesting that residents of the Hulme high-rise flats in Manchester were unhappier than they had been in their backto-back slums.

The failure of the British press and public opinion to halt the vandalism in British cities is all the more lamentable because, I believe, this kind of development is a specifically English crime. If Christopher Booker's film had a flaw, it was in his attempt to portray the work of the planners as something universal, and of almost religious significance. He showed us, for instance, examples of hideous blocks of flats in Denmark and Poland, with the implication that building there was comparable to Glasgow and Manchester. Yet Copenhagen, the only big city in Denmark, remains almost untouched by development, while most of the suburban housing is small in scale and pleasant in execution. Although most Polish cities were flattened by war, the planners since then have done their best to avoid the kind of soul-less, skyscraper blocks as shown in the film. Indeed Beirut, the first Communist boss of Poland after the war, insisted on rebuilding the whole medieval quarter of Warsaw.

At another point in his film, Christopher Booker suggests that planning and development, similar to that in Britain, was taking place at the same time in Paris and Milan, Cairo and Jerusalem, Moscow and Melbourne. Now, hold on a moment. It is true that Le Corbusier, the architect and city planner who talked of buildings as 'a machine to live in', was French, and inspired some hideous buildings in Marseilles. And as Christopher Booker records in his film, Le Corbusier applied to the Paris Municipality with a plan to erect one of his cities on the Left Bank of the Seine; but as Booker explains, the Municipality turned down his plan. Even today, although some hideous towers have gone up in Montparnasse, Paris is mercifully free of nasty building development. Moreover the conservationists there are strong enough, and if necessary rough enough, to stop any further plans for motor-ways and skyscrapers.

Milan has some unpleasant suburbs but nothing much has been done to spoil the city centre. The only Italian city to have suffered comparably with, say, Manchester or Glasgow, is Palermo; for much the same reasons. In all three cities, the property developers have entered into a partnership with a tightly-knit and secretive criminal society, the Mafia in Palermo, the Labour Party in Glasgow and Manchester.

Have Cairo and Jerusalem suffered the same fate as London? Cairo surely deserves such a fate since the Pharoahs were the first of the megalomaniac architects. Jerusalem has been ravaged by some of the very same individual property millionaires who have ravaged London. Moscow, the fifth city mentioned by Christopher Booker, fits into his argument, but Melbourne? Certainly there has been too inuch knocking down of the Gold Rush period buildings, but not a devastation comparable to Victorian cities in England. The much more attractive city of Sydney has been preserved by, of all unlikely bodies, the Building Workers Union, whose eccentric, Communist boss during the Sixties was a devout conservationist. Another pleasant city, Adelaide, has been conserved thanks to South Australia's sensible Labour Prime Minister.

Germans, like Gropius, were prominent in the futurist architectural movement that Christopher Booker so rightly execrates. He quite rightly hints at a connection between Hitler's political madness and architectural ambitions. (Was not Stalin also an architect manqué? He personally designed those monstrous wedding cake constructions such as Moscow University and Warsaw's Palace of Culture.) Yet although German architects were infected with the ideas of Le Corbusier, and although most German cities were razed to the ground by war, giving the opportunity for creating a new plan, most German cities (with the exception of Frankfurt) have been rebuilt with reverence for the past and consideration for those who live and work there. Munich and Hamburg, for instance, are incomparably better places to live than Liverpool or Bradford. The exception, Frankfurt, has been rebuilt to resemble not one of Le Corbusier's fantasies, but any old city in the United States. Its concrete skyscrapers and motor-ways are the result not of some philosophical day-dream but simply the needs of the business community.

Although Le Corbusier was an insane and evil thinker, I doubt if he is really to blame for what has happened to British cities. As Christopher Booker shows in his film, the planners in post-war Britain seldom managed to put their plans into action, due largely to a prohibitive tax on money made by developers. It was not till the Tories came back and removed this tax that the property boom got under way. Of course, during the Fifties and Sixties, the property men often went into partnership with Labour councillors in such cities as Newcastle and elsewhere but few of these men (with the exception of T. Dan Smith) were interested in architecture or socialist theory. The majority of the people who knocked down and rebuilt Britain may never had heard of Le Corbusier: but they had heard of money.

In short, I believe that the mass destruction of British cities must be blamed not so much on dreaming planners and architects but on our politicians, indeed on ourselves, for not having controlled and checked the greedy developers. It is too late now to repair the damage in most of our cities but let us hope that Christopher Booker's film will prevent the destruction of those few cities, like Edinburgh, that have so far escaped demolition. Above all, let us hope that the film will be seen and its lesson learned across the Irish Sea, thus preventing the threatened demolition of Georgian Dublin, to make way for a city of ring-roads and skyscrapers.