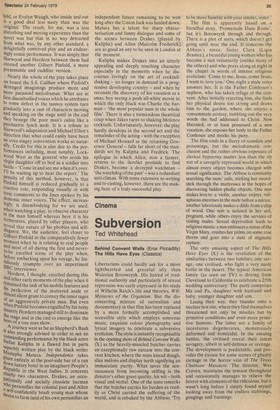 Behind Convent Walls (Eros Piccadilly) The Hills Have Eyes (Classics) Libertarians could hardly ask for a more lighthearted and graceful ally than Walerian Borowcyzk. His hatred of traditional authority and particularly of sexual repression was early expressed in his study of Wilhelm Reich's life and theories, W R: Mysteries of the Organism. But the disconcerting mixture of surrealism and documentary in that film has been replaced by a more formally accomplished and accessible style which employs sonorous music, exquisite colour photography and lyrical imagery to celebrate a subversive eroticism. The style is instantly recognisable in the opening shots of Behind Convent Walls (X) as the heavily-muscled butcher carries an exceptionally raw carcase into the convent kitchen, where the nuns knead dough, slice melons and display teeth signifying an immaculate purity. What saves the sensuousness from becoming stifling is the director's other great quality, his wit — both visual and verbal. One of the nuns remarks that the butcher carries his burden as readily as Christ carried the suffering of the world, and is rebuked by the Abbess: 'Try to be more humble with your similes, sister.'

The film is apparently based on a Stendhal story, 'Promenade Dans Rome', but it's Borowcyzk through and through.

There is a plot of sorts, which doesn't get going uptil near the end. It concerns the Abbess's niece, Sister Clara (Ligia Branice), a beautiful young woman who has become a nun voluntarily (unlike many of the others) and who prays along at night in the chapel in words of intense religious eroticism: 'Come to me, Jesus, come Jesus, I want to love you.: One night a male voice answers her. It is the Father Confessor's nephew, who has taken refuge at the con vent. After initially rejecting him, she finds her physical desire too strong and draws him to the garden, where she enjoys a consummate ecstasy, babbling out the very words she had addressed to Christ. Now liberated, or at least possessed of a new vocation, she exposes her body to the Father Confessor and mocks his piety.

The film ends in a flurry of scandals and poisonings, but the melodramatic con clusion and the rather obvious exposure of clerical hypocrisy matter less than the sly nut of a savegely repressed world in which almost every object becomes charged with sexual significance. The Abbess is constantly searching the nuns' cells, sticking her sword stick through the mattresses in the hopes of discovering hidden phallic objects. One nun makes love to a violin, another enjoys vol uptuous exercises in the nude before a mirror, another laboriously makes a dildo from a chip of wood. One nun is isolated in her cell, pregnant, while others enjoy the services of visiting males. Sexual deprivation leads to religious mania: a nun embraces a statue of the Virgin Mary, crushes her palms on some rose thorns and goes into a state of stigmatic rapture.

The only amusing aspect of The Hills Have Eyes (X) is the revelation of the similarities between two families, one sav age, one civilised, who fight a very nasty battle in the desert. The typical American .family (as seen on TV) is driving from Cleveland to California to celebrate a 25th wedding anniversary. The party comprises Ma and Pa, daughter with husband and baby, younger daughter and son.

Losing their way, they blunder onto a nuclear test site, where they find themselves threatened not only be missiles but by primitive conditions and even more primi tive humans. The latter are a family of incestuous degenerates, monstrously deformed and homicidal. In the ensuing battles, the civilised reveal their latent savagery, albeit in self-defence or revenge.

The development is predictable, and provides the excuse for some scenes of ghastly carnage in the horror vein of The Texas Chainsaw Massacre. The director, Wes Craven, maintains the tension throughout and occasionally manages to relieve the horror with elements of the ridiculous, but it wasn't long before I simply found myself looking away from the endless stabbings, gougings and burnings.