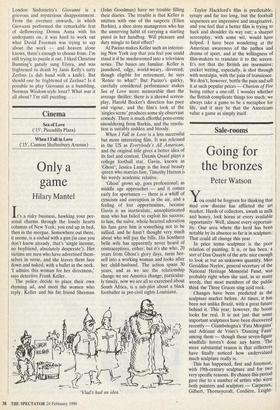 It's a risky business, hawking your per- sonal charms through the lonely hearts columns of New York; you end up in bed, then in the morgue. Somewhere out there, it seems, is a sinbad with a gun (in case you don't know already, that's 'single income, no boyfriend, absolutely desperate'). Her victims are men who have advertised them- selves in verse, and she leaves them face down and naked, with a bullet in the neck. 'I admire this woman for her directness,' says detective Frank Keller.

The police decide to place their own rhyming ad, and meet the women who reply. Keller and his fat friend Sherman (John Goodman) have no trouble filling their diaries. The trouble is that Keller is smitten with one of the suspects (Ellen Barkin), a shoe store manageress who has the unnerving habit of carrying a starting pistol in her handbag. Will pleasure and duty mingle to fatal effect?

Al Pacino makes Keller such an interest- ing New York cop that you feel you could stand it if he mushroomed into a television series. The basics are familiar. Keller is jaundiced, edgy, world-weary, divorced; though eligible for retirement, he says 'Retire to what?' But Pacino's quirky, carefully considered performance makes Sea of Love more memorable than the average thriller; there is a shrewd screen- play, Harold Becker's direction has pace and vigour, and the film's look at the 'singles scene' produces some sly observant comedy. There is much effortful porn-comic smouldering from Barkin, and the resolu- tion is suitably sudden and bloody. When I Fall in Love is a less successful but more interesting film. It was released in the US as Everybody's All American, and the original title gives a better idea of its feel and content. Dennis Quaid plays a college football star, Gavin, known as 'Ghost'; Jessica Lange is the local beauty queen who marries him; Timothy Hutton is his weedy academic relative.

'Ghost' grows up, goes professional; as middle age approaches — and it comes early for sportsmen — there is a whiff of cynicism and corruption in the air, and a feeling of lost opportunities, because Gavin is an inarticulate, unsophisticated man who has failed to exploit his success; to him, the naïve, whole-hearted adoration his fans gave him is something not to be sullied, and he hasn't thought very much about who will pay the bills. His Southern belle wife has apparently never beard of contraceptives, either; but it's she who, 20 years from Ghost's glory days, turns her- self into a working woman and looks after her child-husband. The action spans 30 years, and as we see the relationship change we see America change; particular- ly timely, now we are all so exercised about South Africa, is a sub-plot about a black footballer in pre-civil rights Louisiana.

Taylor Hackford's film is predictable, syrupy and far too long, but the football sequences are impressive and imaginative, and you feel that a better film is trying to hack and shoulder its way out; a sharper screenplay, with some wit, would have helped. I have been wondering at the American awareness of the pathos and drama of sport, and at the willingness of film-makers to translate it to the screen. It's not that the British are insensitive; cricket writing, especially, is shot through with nostalgia, with the pain of transience. We don't, however, bottle the pain and sell it at such popular prices — Chariots of Fire being rather a one-off. I wonder whether the British complicate things too much; we always take a game to be a metaphor for life, and it may be that the Americans value a game as simply itself.