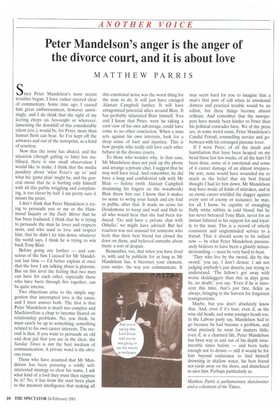 Page 10, 24 February 2001 — Peter Mandelson's anger is the anger of the divorce court, and it is about love
Close

Peter Mandelson's anger is the anger of the divorce court, and it is about love

Since Peter Mandelson's most recent troubles began, I have rather steered clear of commentary. Some time ago, I caused him great embarrassment, however unwittingly, and I do think that the sight of my leering chops on Newsnight or wherever, lamenting the downfall of this considerable talent (etc.), would be, for Peter, more than human flesh can bear. So I've kept off the airwaves and out of the newsprint, as a kind of courtesy.

Now that the noise has abated, and the situation (though galling to him) has stabilised, there is one small observation I would like to make. I think that the media punditry about 'what Peter's up to' and what his 'game plan' might be, and the general moan that he is hurting only himself with all this public wriggling and complaining, is too clever by half. I am pretty sure it misses the point.

Before going any further — and conscious of the fuss I caused for Mr Mandelson last time — I'd better explain at once that the love I am talking about is platonic. But on this level the feeling that two men can have for each other, especially those who have been through fire together, can be quite intense.

Two objections arise to the simple suggestion that interrupted love is the cause, and I must answer both. The first is that Peter Mandelson is much too complex and Machiavellian a chap to become fixated on relationship problems. No, you think, he must surely be up to something; something related to his own career interests. The second is that, if you want to persuade an old and dear pal that you are in the clear, the Sunday Times is not the best medium of communication. A private word is the obvious route.

Those who have assumed that Mr Mandelson has been pursuing a coldly selfinterested strategy to clear his name, I ask what kind of a fool they must then suppose he is? No, it has from the start been plain to the meanest intelligence that making all this emotional noise was the worst thing for the man to do. It will just have enraged Alastair Campbell further. It will have antagonised potential allies around Blair. It has probably infuriated Blair himself. You and I know that Peter, were he taking a cool view of his own advantage, could have come to no other conclusion. When a man acts against his own interests, look for a deep sense of hurt and injustice. This is how people who really still love each other behave in the divorce courts.

To those who wonder why, in that case, Mr Mandelson does not pick up the phone and arrange a private chat, I suggest that he may well have tried. And remember, he did have a long and confidential talk with Mr Blair — before (with Alastair Campbell drumming his fingers on the woodwork) Blair threw him out. I know that it makes no sense to wring your hands and cry foul in public, after that. It made no sense for Desdemona to weep and wail and blub to all who would hear that she had been traduced; 'Go and have a private chat with Othello,' we might have advised. But her reaction was not unusual for someone who feels that their best friend has closed the door on them, and believed untruths about them: a sort of despair.

Remember, too, that when you have lived in, with and by publicity for as long as Mr Mandelson has, it becomes your element, your metier, the way you communicate. It may seem hard for you to imagine that a man's first port of call when in emotional distress and practical trouble would be an editor, but these things become almost reflexes. And remember that the newspapers have mostly been kinder to Peter than his political comrades have. We of the press are, in some weird sense, Peter Mandelson's Candid Friend, counselling service and gobetween with his estranged platonic lover.

If I were Peter, of all the insult and humiliation that have been heaped on my head these last few weeks, of all the hurt I'd been done, some of it emotional and some of it career damage of an almost irreparable sort, none would have wounded me so much as the belief that my best friend thought I had let him down. Mr Mandelson may have made all kinds of mistakes, and in an exotic career wielded the dagger against every sort of enemy or nuisance; he may, for all I know, be capable of strangling fluffy white rabbits in cold blood; but he has never betrayed Tony Blair, never for an instant faltered in his support for and loyalty to the man. This is a record of utterly consistent and singleminded service to a friend. That it should seem to be sullied now — by what Peter Mandelson passionately believes to have been a ghastly misunderstanding — must be very hard to bear.

'They who live by the sword, die by the sword,' you say. I don't demur. I am not judging anybody's just deserts, just trying to understand. 'The fellow's got away with worse skulduggery than this in days gone by, no doubt,' you say. 'Even if he is innocent this time, that's just fate, fickle as always, bringing in the harvest for forgotten transgressions.'

Maybe, but you don't absolutely know that. And, even if it's true; even if, as the wise old heads, and some younger heads too, in the Labour party say, Mandelson had to go because he had become a problem, and what precisely he went for matters little; even if, in a charmed life, Peter Mandelson has been way in and out of his depth innumerable times before — and been lucky enough not to drown — still it would be for him beyond endurance to find himself drowning in shallow water, his best friend not yards away on the shore, and disinclined to save him. Perhaps particularly so.