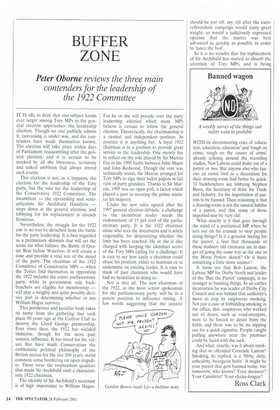 contenders for the leadership of the 1922 Committee

IT IS idle to deny that one subject looms ever larger among Tory MPs as the general election approaches: the leadership election. Though no one publicly admits it, canvassing is under way, and the contenders have made themselves known. The election will take place within days of Parliament reassembling after the general election, and it is certain to be marked by all the bitterness, acrimony and naked ambition that always attend such events.

Nevertheless, the struggle for the 1922 can in no way be detached from the battle for the party leadership. It is best regarded as a preliminary skirmish that will set the scene for what follows: the Battle of Quatre Bras before Waterloo. It will create a tone and provide a vital test of the mood of the party. The chairman of the 1922 Committee of Conservative MPs — when the Tories find themselves in opposition the 1922 includes the entire parliamentary party, while in government only backbenchers are eligible for membership — will play a weighty and quite possibly decisive part in determining whether or not William Hague survives.

This ponderous and peculiar body takes its name from the gathering that took place 80 years ago at the Carlton Club to destroy the Lloyd George premiership. Ever since then, the 1922 has wielded immense, though for the most part unseen, influence. It has stood for the values that have made Conservatism the emblematic political philosophy of the British nation for the last 200 years: stolid common sense bordering on open stupidity. Those were the resplendent qualities that made Sir Archibald such a characteristic 1922 chairman.

The identity of Sir Archibald's successor is of high importance to William Hague. For he or she will preside over the party leadership election which many MPs believe is certain to follow the general election. Theoretically, the chairmanship is a neutral and independent position. In practice it is anything but. A loyal 1922 chairman is in a position to provide great service to the leadership. One merely has to reflect on the role played by Sir Marcus Fox in the 1995 battle between John Major and John Redwood. Though the vote was technically secret, Sir Marcus arranged for Tory MPs to sign their ballot papers in full view of party grandees. Thanks to Sir Marcus, 1995 was an open poll, a factor which played a part in securing the prime minister his majority.

Under the new rules agreed after the 1997 general election debacle, a challenge to the incumbent leader needs the endorsement of 15 per cent of the parliamentary party. It is the 1922 chairman alone who sees the documents and is solely responsible for determining whether the limit has been reached. He or she is also charged with keeping the identities secret of the Tory MPs calling for a challenge. It is easy to see how easily a chairman could abuse his position, either to maintain or to undermine an existing leader. It is easy to think of past chairmen who would have had no hesitation in doing so.

Nor is that all. The new chairman of the 1922, as the most senior spokesman for the parliamentary party, will be in a potent position to influence timing. A few words suggesting that the contest should be put off, say, till after the euroreferendum campaign would carry great weight; so would a judiciously expressed opinion that the matter was best advanced as quickly as possible in order to 'lance the boil'.

So it is no wonder that the replacement of Sir Archibald has started to absorb the attention of Tory MPs, and is being