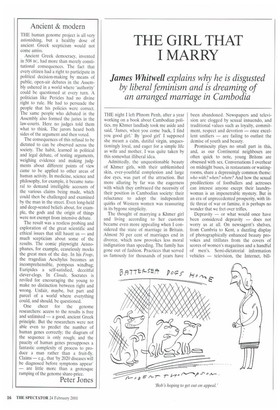 THE human genome project is all very astonishing, but a healthy dose of ancient Greek scepticism would not come amiss.

Ancient Greek democracy, invented in 508 BC, had more than merely constitutional consequences. The fact that every citizen had a right to participate in political decision-making by means of public, open-air debates in the Assembly ushered in a world where 'authority' could be questioned at every turn. A politician like Pericles had no divine right to rule. He had to persuade the people that his policies were correct. The same people who debated in the Assembly also formed the juries in the law-courts. Here no judges told them what to think. The jurors heard both sides of the argument and then voted.

The consequences of this refusal to be dictated to can be observed across the society. The habit, learned in political and legal debate, of testing arguments, weighing evidence and making judgments about different points of view came to be applied to other areas of human activity. In medicine, science and philosophy, for example, it became natural to demand intelligible accounts of the various claims being made, which could then be challenged and examined by the man in the street. Even long-held and deep-seated beliefs about, for example, the gods and the origin of things were not exempt from intensive debate.

The result was a restless probing and exploration of the great scientific and ethical issues that still haunt us — and much scepticism about some of the results. The comic playwright Aristophanes, for example, ceaselessly mocks the great men of the day. In his Frogs, the tragedian Aeschylus becomes an incomprehensible, pompous windbag; Euripides a self-satisfied, deceitful clever-clogs. In Clouds, Socrates is reviled for encouraging the young to make no distinction between right and wrong. Unfair, maybe, but part and parcel of a world where everything could, and should, be questioned.

One cheer for the genome researchers: access to the results is free and unlimited — a good, ancient Greek principle. But the researchers were not able even to predict the number of human genes correctly; the diagram of the sequence is only rough; and the paucity of human genes presupposes a fantastic complexity of process to produce a man rather than a fruit-fly. Claims — e.g., that 'by 2020 diseases will be diagnosed before symptoms appear' — are little more than a grotesque ramping of the genome share-price.