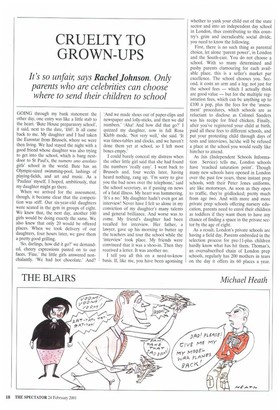 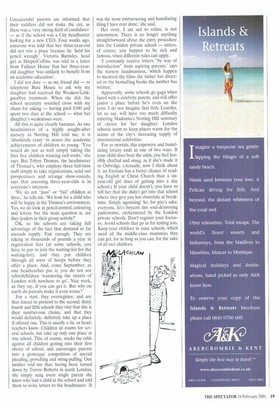 It's so unfair, says Rachel Johnson. Only

GOING through my bank statement the other day, one entry was like a little stab to the heart. `Bute House preparatory school', it said, next to the date, 160'. It all came back to me. My daughter and I had taken the Eurostar from Brussels, where we were then living. We had stayed the night with a good friend whose daughter was also trying to get into the school, which is bang nextdoor to St Paul's, the numero uno assoluto girls' school in the world. Bute has an Olympic-sized swimming-pool, lashings of playing-fields, and art and music. As a `Paulina' myself, I hoped, ambitiously, that my daughter might go there.

When we arrived for the assessment, though, it became clear that the competition was stiff. Our six-year-old daughters were seated in the gym in groups of eight. We knew that, the next day, another 100 girls would be doing exactly the same. We also knew that only 20 would be offered places. When we took delivery of our daughters, four hours later, we gave them a pretty good grilling.

`So, darlings, how did it go?' we demanded, cheery expressions pasted on to our faces. `Fine,' the little girls answered nonchalantly. `We had hot chocolate.' And? 'And we made shoes out of paper-clips and newspaper and lolly-sticks, and then we did numbers."Alia! And how did that go?' I quizzed my daughter, now in full Rosa Klebb mode. `Not very well,' she said. `It was times-tables and clocks, and we haven't done them yet at school, so I left most boxes empty.'

I could barely conceal my distress when the other little girl said that she had found the numbers `really easy'. I went back to Brussels and, four weeks later, having heard nothing, rang up. 'I'm sorry to give you the bad news over the telephone,' said the school secretary, as if passing on news of a fatal illness. My heart was hammering. 'It's a no.' My daughter hadn't even got an interview! Never have I felt so alone in my conviction of my daughter's many talents and general brilliance. And worse was to come. My friend's daughter had been recalled for interview. Her father, a lawyer, gave up his morning to butter up the teachers and tour the school while the 'interview' took place. My friends were convinced that it was a shoo-in. Then they received a letter. It was another no.

I tell you all this on a need-to-know basis. If, like me, you have been agonising whether to yank your child out of the state sector and into an independent day school in London, thus contributing to this country's grim and ineradicable social divide, you need to know the following.

First, there is no such thing as parental choice, let alone `parent power', in London and the South-east. You do not choose a school. With so many determined and pushy parents clamouring for each available place, this is a seller's market par excellence. The school chooses you. Second, it costs an arm and a leg; not just for the school fees — which I actually think are good value — but for the multiple registration fees, which can be anything up to £100 a pop, plus the fees for the `assessment' procedures, which schools are as reluctant to disclose as Colonel Sanders was his recipe for fried chicken. Finally, after you've registered your child at birth, paid all these fees to different schools, and put your protesting child through days of tests and interviews, he/she will be refused a place at the school you would really like him/her to attend.

As Isis (Independent Schools Information Service) tells me, London schools have 'reached saturation point'. Though many new schools have opened in London over the past few years, these instant prep schools, with their Peter Jones uniforms, are like motorways. As soon as they open to traffic, they're gridlocked; pretty much from age two. And with more and more private prep schools offering nursery education, parents need to enrol their children as toddlers if they want them to have any chance of finding a space in the private sector by the age of eight.

As a result, London's private schools are having a field day. Parents embroiled in the selection process for pre-11-plus children hardly know what has hit them. Thomas's, an oversubscribed chain of London prep schools, regularly has 200 mothers in tears on the day it offers its 60 places a year. Unsuccessful parents are informed that their toddlers did not make the cut, as there was a 'very strong field of candidates' — as if the school was a City headhunter looking for a new CEO. Four weeks ago, someone was told that her three-year-old did not win a place because he 'held his pencil wrongly'. Victoria Barnsley, head girl at HaglerCollins, was told in a letter from FaIkner House that her three-yearold daughter 'was unlikely to benefit from an academic education'.

I did not dare — as my friend did — to telephone Bute House to ask why my daughter had received the Weakest-Link goodbye treatment. When she did, the school secretary sounded cross with my chum for asking — having paid £100 and spent two days at the school — what her daughter's weaknesses were.

All this is quite clearly bananas. As one headmistress of a highly sought-after nursery in Notting Hill told me, it is 'absolutely crazy' to assess the academic achievements of children so young. 'You would do just as well simply taking the first five children wearing red socks,' she says. But Tobyn Thomas, the headmaster of Thomas's, who employs three full-time staff simply to take registrations, send out prospectuses and arrange show-rounds, says that assessing three-year-olds is in everyone's interests.

'We do not "pass" or "fail" children at three,' he tells me. We look for a child who will be happy in the Thomas's environment. Yes, we do look at pencil-control, colouring and letters, but the main question is, are they leaders in their group activity?'

OK, so the schools are taking full advantage of the fact that demand so far exceeds supply. Fair enough. They are raking in thousands of pounds a year in registration fees (at some schools, you have to pay to join the waiting-list for the waiting-list), and they put children through all sorts of hoops before they offer a place. And, come September, as one headteacher put it, you do not see schoolchildren 'wandering the streets of London with nowhere to go'. Nice work, as they say, if you can get it. But why on earth do parents make it even worse?

For a start, they overregister, and are thus forced to pretend to the second, third, fourth and fifth schools they visit that this is their number-one choice, and that they would definitely, definitely take up a place if offered one. This is usually a lie, as head

teachers know. Children sit exams for several schools, but take up only one place at

one school. This, of course, stacks the odds against all children getting into their first choice of school, and encourages parents into a grotesque competition of special pleading, grovelling and string-pulling. One mother told me that, having been turned down by Trevor Roberts in north London, she simply rang every single parent she knew who had a child at the school and told them to write letters to the headmaster. 'It was the most embarrassing and humiliating thing I have ever done,' she said.

Her story, I am sad to relate, is not uncommon. There is no longer anything straightforward about the entry procedure into the London private school — unless, of course, you happen to be rich and famous, when different rules can apply.

'I constantly receive letters "by way of introduction" from aspiring parents,' says the nursery headmistress, 'which happen to mention the films the father has directed or the bestselling books the mother has written.'

Apparently, some schools go gaga when faced with a celebrity parent, and will offer junior a place before he's even sat the tests. I do not imagine that little Lourdes, let us say, will have too much difficulty entering Madonna's Notting Hill seminary of choice for her daughter. London schools seem to keep places warm for the scions of the city's increasing supply of international celebrities.

For us mortals, this expensive and humiliating lottery ends in one of two ways. If your child does beat the odds, you feel horribly chuffed and smug, as if she's made it to Oxbridge. (Actually, now I think about it, an Etonian has a better chance of reading English at Christ Church than a sixyear-old girl does of getting into a day school.) If your child doesn't, you have to tell her that she didn't get into that school where they give you hot chocolate at breaktime. Simply agonising! So, for pity's sake, everyone, let's boycott this soul-destroying pantomime, orchestrated by the London private schools. Don't register your foetuses. Avoid schools that go in for testing tots. Keep your children in state schools, which need all the middle-class mummies they can get, for as long as you can, for the sake of all our children.