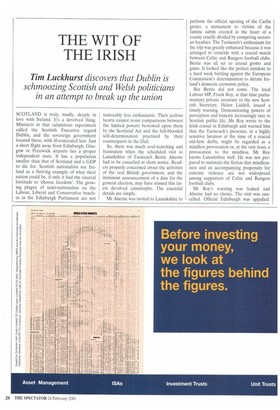 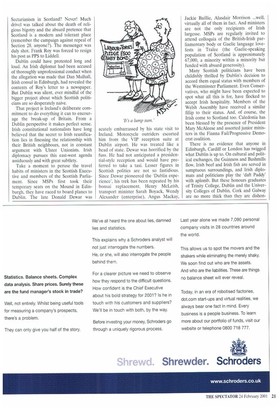 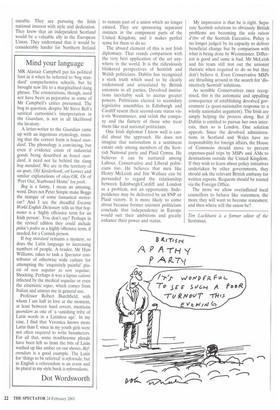 THE WIT OF THE IRISH

Tim Luckhurst discovers that Dublin is

SCOTLAND is truly, madly, deeply in love with Ireland. It's a devolved thing. Ministers in that calamitous experiment called the Scottish Executive regard Dublin, and the sovereign government located there, with ill-concealed lust. Just a short flight away from Edinburgh, Glasgow or Prestwick airports lies a proper independent state. It has a population smaller than that of Scotland and a GDP to die for. Scottish nationalists see Ireland as a thriving example of what their nation could be, if only it had the visceral fortitude to 'choose freedom'. The growing plague of semi-nationalists on the Labour, Liberal and Conservative benches in the Edinburgh Parliament are not noticeably less enthusiastic. Their jealous hearts cannot resist comparisons between the limited powers bestowed upon them by the Scotland Act and the full-blooded self-determination practised by their counterparts in the Dail.

So, there was much soul-searching and frustration when the scheduled visit to Lanarkshire of Taoiseach Bertie Aherne had to be cancelled at short notice. Readers properly concerned about the activities of the real British government, and the imminent announcement of a date for the general election, may have missed this latest devolved catastrophe. The essential details are simple.

Mr Aherne was invited to Lanarkshire to perform the official opening of the Carfin grotto, a monument to victims of the famine subtly erected in the heart of a county cruelly divided by competing sectarian loyalties. The Taoiseach's enthusiasm for the trip was greatly enhanced because it was arranged to coincide with a crucial match between Celtic and Rangers football clubs. Bertie was all set to attend grotto and game. It looked like the perfect antidote to a hard week battling against the European Commission's determination to dictate Ireland's domestic economic policy.

But Bertie did not come. The local Labour MP, Frank Roy, at that time parliamentary private secretary to the new Scottish Secretary, Helen Liddell, issued a timely warning. Demonstrating powers of perception and honesty increasingly rare in Scottish public life, Mr Roy wrote to the Irish consul in Edinburgh and warned him that the Taoiseach's presence, in a highly sensitive location at the time of a crucial old-firm derby, might be regarded as a mindless provocation or, at the very least, a provocation to the mindless. Mr Roy knows Lanarkshire well. He was not prepared to maintain the fiction that mindlessness and an accompanying propensity for extreme violence are not widespread among supporters of Celtic and Rangers football clubs.

Mr Roy's warning was leaked and Aherne had no choice. The visit was cancelled. Official Edinburgh was appalled. Sectarianism in Scotland? Never! Much drivel was talked about the death of religious bigotry and the absurd pretence that Scotland is a modem and tolerant place (remember the campaign against repeal of Section 28, anyone?). The messenger was duly shot. Frank Roy was forced to resign his post as PPS to Liddell.

Dublin could have protested long and loud. An Irish diplomat had been accused of thoroughly unprofessional conduct when the allegation was made that Dan Mulhall, Irish consul in Edinburgh, had revealed the contents of Roy's letter to a newspaper. But Dublin was silent, ever mindful of the bigger project about which Scottish politicians are so desperately naive.

That project is Ireland's deliberate commitment to do everything it can to encourage the break-up of Britain. From a Dublin perspective it makes perfect sense. Irish constitutional nationalists have long believed that the secret to Irish reunification lies in finessing the relationship with their British neighbours, not in constant argument with Ulster Unionists. Irish diplomacy pursues this east-west agenda assiduously and with great subtlety.

Take a moment to peruse the travel habits of ministers in the Scottish Executive and members of the Scottish Parliament. Since MSPs first took their temporary seats on the Mound in Edinburgh, they have raced to board planes to Dublin. The late Donald Dewar was acutely embarrassed by his state visit to Ireland. Motorcycle outriders escorted him from the VIP reception suite at Dublin airport. He was treated like a head of state. Dewar was horrified by the fuss. He had not anticipated a presidential-style reception and would have preferred to take a taxi. Lesser figures in Scottish politics are not so fastidious. Since Dewar pioneered the 'Dublin experience', his trek has been repeated by his bonsai replacement, Henry McLeish, transport minister Sarah Boyack, Wendy Alexander (enterprise), Angus Mackay, Jackie Baillie, Alasdair Morrison ...well, virtually all of them in fact. And ministers are not the only recipients of Irish largesse. MSPs are regularly invited to attend colloquia of the British-Irish parliamentary body or Gaelic language lovefests in Tralee (the Gaelic-speaking population of Scotland is approximately 67,000, a minority within a minority but funded with absurd generosity).

Many Scottish politicians have been childishly thrilled by Dublin's decision to accord them equal status with members of the Westminster Parliament. Even Conservatives, who might have been expected to spot what all this is for, have flocked to accept Irish hospitality. Members of the Welsh Assembly have received a similar fillip to their status. And, of course, the Irish come to Scotland too. Caledonia has been blessed by the presence of President Mary McAleese and assorted junior ministers in the Fianna Fail/Progressive Democrat coalition.

There is no evidence that anyone in Edinburgh, Cardiff or London has twigged what Dublin is up to. On cultural and political exchanges, the Guinness and Bushmills flow, Irish beef and Irish fish are served in sumptuous surroundings, and Irish diplomats and politicians play the 'daft Paddy' with aplomb. But these honours graduates of Trinity College, Dublin and the University Colleges of Dublin, Cork and Galway are no more thick than they are dishon ourable. They are pursuing the Irish national interest with style and dedication. They know that an independent Scotland would be a valuable ally in the European Union. They understand that it would be considerably harder for Northern Ireland to remain part of a union which no longer existed. They are sponsoring separatist instincts in the component parts of the United Kingdom, and it makes perfect sense for them to do so.

The absurd element of this is not Irish diplomacy. That stands comparison with the very best application of the art anywhere in the world. It is the ridiculously blinkered perspectives of Scottish and Welsh politicians. Dublin has recognised a stark truth which used to be clearly understood and articulated by British unionists in all parties. Devolved institutions inevitably seek to accrue greater powers. Politicians elected to secondary legislative assemblies in Edinburgh and Cardiff resent their second-rate status visà-vis Westminster, and relish the company and the flattery of those who treat them like real national politicians.

One Irish diplomat I know well is candid about the approach. Ile does not imagine that nationalism is a sentiment extant only among members of the Scottish National party and Plaid Cymru. He believes it can be nurtured among Labour, Conservative and Liberal politicians too. He believes that men like Henry McLeish and Jim Wallace can be persuaded to regard the relationship between Edinburgh/Cardiff and London as a problem, not an opportunity. Independence may be delivered by an SNP or Plaid victory. It is more likely to come about because former unionist politicians conclude that independence in Europe would suit their ambitions and greatly enhance their power and status. My impression is that he is right. Separate Scottish solutions to obviously British problems are becoming the sole raison d'être of the Scottish Executive. Policy is no longer judged by its capacity to deliver beneficial change but by comparison with what is being done by Westminster. Different is good and same is bad. Mr McLeish and his team still trot out the unionist rhetoric when required to do so but they don't believe it. Even Conservative MSPs are thrashing around in the search for 'distinctively Scottish' solutions.

As sensible Conservatives once recognised, this is the automatic and appalling consequence of establishing devolved government (a quasi-nationalist response to a wholly nationalist argument). The Irish are simply helping the process along. But if Dublin is entitled to pursue her own interests, then so is London. One solution appeals. Since the devolved administrations in Scotland and Wales have no responsibility for foreign affairs, the House of Commons should move to prevent expenses-paid trips by MSPs and AMs to destinations outside the United Kingdom. If they wish to learn about policy initiatives undertaken by other governments, they should ask the relevant British embassy for written reports. Requests should be routed via the Foreign Office.

The more we allow overinflated local councillors to behave like statesmen, the more they will want to become statesmen; and then where will the union be?

Tim Luckhurst is a former editor of the Scotsman.