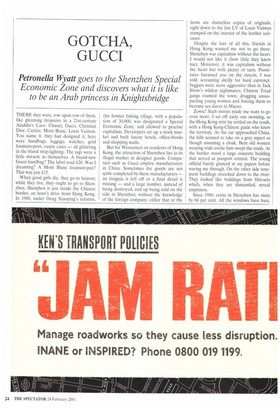 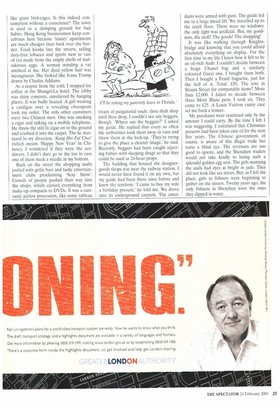 THERE they were, row upon row of them, like gleaming treasures in a 21st-century Aladdin's Cave: Chanel, Gucci, Christian Dior, Cartier, Mont Blanc, Louis Vuitton. You name it, they had designed it; here were handbags, luggage, watches, gold fountain-pens, vanity cases — all glittering in the bland strip-lighting. The tags were a little miracle in themselves. A brand-new Gucci handbag? The label read £20. Was I dreaming? A Mont Blanc fountain-pen? That was just £15.

When good girls die, they go to heaven; while they live, they ought to go to Shenzhen. Shenzhen is just inside the Chinese border, an hour's drive from Hong Kong. In 1980, under Deng Xiaoping's reforms, this former fishing village, with a population of 30,000, was designated a Special Economic Zone, and allowed to practise capitalism. Developers set up a stock market and built luxury hotels, office-blocks and shopping malls.

But for Westerners or residents of Hong Kong, the attraction of Shenzhen lies in its illegal market in designer goods. Companies such as Gucci employ manufacturers in China. Sometimes the goods are not quite completed by these manufacturers — an insignia is left off or a final detail is missing — and a large number, instead of being destroyed, end up being sold on the side in Shenzhen, without the knowledge of the foreign company; either that or the items are shameless copies of originals, right down to the last LV of Louis Vuitton stamped on the interior of the leather suitcases.

Despite the lure of all this, friends in Hong Kong warned me not to go there. Shenzhen was capitalism without the heart. I would not like it (how little they knew me). Moreover, it was capitalism without the heart but with plenty of tarts. Prostitutes harassed you on the streets, I was told, screaming shrilly for hard currency; beggars were more aggressive than in Jack Straw's wildest nightmares; Chinese Triad gangs roamed the town, drugging unsuspecting young women and forcing them to become sex slaves in Macao.

Zowie! Such stories made me want to go even more. I set off early one morning, as the Hong Kong mist lay settled on the roads, with a Hong Kong-Chinese guide who knew the territory. As the car approached China, the hills seemed to take on a grey aspect as though assuming a cloak. Bent old women wearing wide coolie hats swept the roads. At the border stood a large concrete building that served as passport control. The young official barely glanced at my papers before waving me through. On the other side tenement buildings stretched down to the river. They looked like buildings from film-sets which, when they are dismantled, reveal emptiness.

Since 1980, crime in Shenzhen has risen by 66 per cent. All the windows have bars, like giant bird-cages. Is this indeed consumption without a conscience? The town is used as a dumping ground for bad habits. Hong Kong businessmen keep concubines here because 'luxury' apartments are much cheaper than back over the border. Food kiosks line the streets, selling duty-free tobacco and spirits next to vats of tea made from the empty shells of malodorous eggs. A woman minding a vat smirked at me. Her dyed yellow hair was incongruous. She looked like Ivana Trump drawn by Charles Addams.

As a respite from the cold, I stopped for coffee at the Shangri-La hotel. The lobby was shiny concrete, unrelieved by hanging plants. It was badly heated. A girl wearing a cardigan over a revealing cheongsam took my order. The only other customers were two Chinese men. One was smoking a cigar and talking on a mobile telephone. He threw the still lit cigar on to the ground and crushed it into the carpet. The he muttered in my direction, 'Kung Het Fat Choi' (which means 'Happy New Year' in Chinese). I wondered if they were the sexslavers. I didn't dare go to the loo in case one of them stuck a needle in my bottom.

Back on the street the shopping malls jostled with girlie bars and tacky entertainment clubs proclaiming 'Sexy Show'. Crowds of people pushed their way into the shops, which carried everything from make-up compacts to DVDs. It was a curiously joyless procession, like some tableau vivant of purgatorial souls: thou shalt shop until thou drop. I couldn't see any beggars, though. 'Where are the beggars?' I asked my guide. He replied that every so often the authorities took them away in vans and threw them in the lock-up. 'They're trying to give the place a cleaner image,' he said. Recently, beggars had been caught injecting babies with sleeping drugs so that they could be used as 24-hour props.

The building that housed the designergoods shops was near the railway station. I would never have found it on my own, but my guide had been there once before and knew the territory. 'I came to buy my wife a birthday present,' he told me. We drove into its underground carpark. The atten

dants were armed with guns. The guide led me to a large metal lift. We travelled up to the tenth floor. There were no windows; the only light was artificial. But, my goodness, the stuff! The goods! The shopping!

It was like walking through Knightsbridge and knowing that you could afford absolutely everything on display. For the first time in my life I knew how it felt to be an oil-rich Arab. I couldn't decide between a beige Chanel bag and a similarly coloured Gucci one. I bought them both. Then I bought a Fendi baguette, just for the hell of it. Total: £50. The cost in Sloane Street for comparable items? More than £2,000. I failed to decide between three Mont Blanc pens. I took six. They came to £25. A Louis Vuitton vanity case set me back a tenner.

My purchases were restricted only by the amount I could carry. By the time I left I was staggering. I calculated that Christmas presents had been taken care of for the next five years. The Chinese government, of course, is aware of this illegal trade but turns a blind eye. The revenues are too good to ignore, and the Shenzhen traders would not take kindly to losing such a splendid golden egg nest. The girls manning the stalls had eyes as bright as jade. They did not look like sex slaves. But, as I left the place, girls in fishnets were beginning to gather on the streets. Twenty years ago, the only fishnets in Shenzhen were the ones they dipped in water.