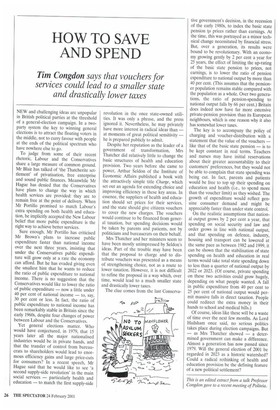 HOW TO SAVE AND SPEND

Tim Congdon says that vouchers for

services could lead to a smaller state and drastically lower taxes

NEW and challenging ideas are unpopular in British political parties at the threshold of a general-election campaign. In a twoparty system the key to winning general elections is to attract the floating voters in the middle, not to curly favour with people at the ends of the political spectrum who have nowhere else to go.

To judge from some of their recent rhetoric, Labour and the Conservatives share a large measure of common ground. Mr Blair has talked of 'the Thatcherite settlement' of privatisation, free enterprise and sound public finances. Meanwhile Mr Hague has denied that the Conservatives have plans to change the way in which health services are provided: they are to remain free at the point of delivery. When Mr Portillo promised to match Labour's extra spending on both health and education, he implicitly accepted the New Labour belief that more public expenditure is the right way to achieve better services.

Yet general elections matter. Who would have conjectured, in 1979, that 15 years later all the major nationalised industries would be in private hands, and that the transfer of control from bureaucrats to shareholders would lead to enormous efficiency gains and large price-cuts for consumers? In a recent speech, Mr Hague said that he would like to see 'a second supply-side revolution' in the main social services — particularly health and education — to match the first supply-side revolution in the once state-owned utilities. It was only a phrase, and the press ignored it. Nevertheless, he may privately have more interest in radical ideas than — at moments of great political sensitivity — he is prepared publicly to admit.

Despite her reputation as the leader of a government of transformation, Mrs Thatcher did relatively little to change the basic structures of health and education provision. Two years before she came to power, Arthur Seldon of the Institute of Economic Affairs published a book with the attractively simple title Charge, which set out an agenda for extending choice and improving efficiency in these key areas. In essence, the suppliers of health and education should set prices for their services, and the state should give citizens vouchers to cover the new charges. The vouchers would continue to be financed from general taxation, but spending decisions would be taken by parents and patients, not by politicians and bureaucrats on their behalf.

Mrs Thatcher and her ministers seem to have been mostly unimpressed by Seldon's ideas. Part of the trouble may have been that the proposal to charge and to distribute vouchers was presented as a means of strengthening choice, not as a route to lower taxation. However, it is not difficult to refine the proposal in a way which, over time, would lead to a much smaller state and drastically lower taxes.

The clue comes from the last Conserva nye government's decision, in the recession of the early 1980s, to index the basic state pension to prices rather than earnings. At the time, this was portrayed as a minor technical change necessitated by financial stress. But, over a generation, its results were bound to be revolutionary. With an economy growing gently by 2 per cent a year for 25 years, the effect of limiting the up-rating of the basic state pension to prices, not earnings, is to lower the ratio of pension expenditure to national output by more than 40 per cent. (This assumes that the pensioner population remains stable compared with the population as a whole. Over two generations, the ratio of pension-spending to national output falls by 66 per cent.) Britain does indeed now have far more extensive private-pension provision than its European neighbours, which is one reason why it also has somewhat lower taxes.

The key is to accompany the policy of charging and voucher-distribution with a statement that the value of the vouchers — like that of the basic state pension — is to be kept constant in real terms. Teachers and nurses may have initial reservations about their greater accountability to their customers' preferences, but they would not be able to complain that state spending was being cut. In fact, parents and patients would be free to top up their spending on education and health (i.e., to spend more than the voucher limit) as they wished. The growth of expenditure would reflect genuine consumer demand and might be appreciably faster than under state control.

On the realistic assumptions that national output grows by 2 per cent a year, that spending on social security and law and order grows in line with national output, and that spending on defence, industry, housing and transport can be lowered at the same pace as between 1982 and 1999, it can be shown that the stabilisation of state spending on health and education in real terms would take total state spending down to less than a quarter of national output by 2022 or 2023. (Of course, private spending on these two activities could grow hugely, depending on what people wanted. A fall in public expenditure from 40 per cent to 25 per cent of national output would permit massive falls in direct taxation. People could redirect the extra money in their hands to school and medical bills.) Of course, ideas like these will be a waste of time over the next few months. As Lord Hailsham once said, no serious politics takes place during election campaigns. But — as Mrs Thatcher showed — a determined government can make a difference. Almost a generation has now passed since 1979. Will the general election of 2001 be regarded in 2023 as a historic watershed? Could a radical rethinking of health and education provision be the defining feature of a new political settlement?

This is an edited extract from a talk Professor Congdon gave to a recent meeting of Politeia.