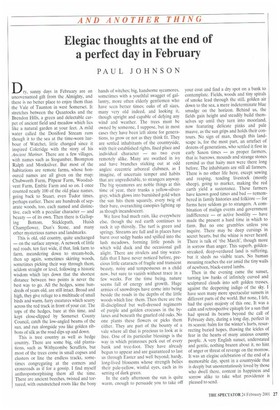 Page 27, 24 February 2001 — Elegiac thoughts at the end of a perfect day in February
Close

Elegiac thoughts at the end of a perfect day in February

Dry, sunny days in February are an uncovenanted gift from the Almighty, and there is no better place to enjoy them than the Vale of Taunton in west Somerset. It stretches between the Quantocks and the Brendon Hills, a green and delectable carpet of ancient field and meadow which lies like a natural garden at your feet. A mild water called the Doniford Stream runs though it to the sea at the time-worn harbour of Watchet, little changed since it inspired Coleridge with the story of his Ancient Mariner. There are a few villages, with names such as Stogumber, Brompton Ralph and Monksilver. But most of the habitations are remote farms, whose honoured names are all given on the map: Chubworth Farm, Pitpear Farm, Woodadvent Farm, Emble Farm and so on. I once counted nearly 100 of the old place names, going back to Stuart, even Tudor times, perhaps earlier. There are hundreds of separate woods, too, each named and distinctive, each with a peculiar character — and beauty — of its own. Then there is Gallop

This is old, old country, quite unchanged — on the surface anyway. A network of little red roads, ten feet wide, if that, link farm to farm, meandering down to stream-beds, then up again, sometimes skirting woods, sometimes picking their way through them, seldom straight or level, following a historic wisdom which lays down that the shortest distance between two points is never the best way to go. All the hedges, some hundreds of years old, are still intact. Broad and high, they give refuge to a multitude of small birds and warm, furry creatures which scurry across the red track in front of your car. The tops of the hedges, bare at this time, and kept close-clipped by Somerset County Council, catch the low-angled beams of the sun, and run alongside you like golden ribbons of silk as the road dips up and down.

This is tree country as well as hedge country. There are some big, old plantations, such as Withycombe Scruffets, but most of the trees come in small copses and clusters or line the endless tracks, sometimes congregating at the corners and crossroads as if for a gossip. I find myself anthropomorphising them all the time. There are ancient beeches, twisted and tortured, with outstretched roots like the bony hands of witches; big, handsome sycamores, sometimes with a youthful swagger of gallantry, more often elderly gentlemen who have seen better times; oaks of all sizes, many very old indeed, and looking it, though upright and capable of defying any wind and weather. The trees must be owned by someone, I suppose, but in most cases they have been left alone for generations, to grow or not as they think fit. They are settled inhabitants of the countryside, with their established rights, fixed place and individual character — no two even remotely alike. Many are swathed in ivy and have branches sticking out at odd angles: eccentric arboreal clubmen, as I imagine, of uncertain temper and habits that are unpredictable, to strangers anyway. The big sycamores are noble things at this time of year, their trunks a yellow-silvergrey, which glows into burnished gold when the sun hits them squarely, every twig of their bare, overarching canopies lighting up as though incandescent.

We have had much rain, like everywhere else, though the red earth continues to suck it up thirstily. The turf is green and springy. Streams are full and in places have burst over sedgy banks and spilled into the lush meadows, forming little ponds in which wild duck and the occasional gull alight. There are rivulets and tiny waterfalls that I have never noticed before, precious little cataracts of fragile and transient beauty, noisy and tempestuous as a child now, but sure to vanish without trace in a few weeks. For the time being, nature seems full of energy and growth. Huge armies of snowdrops have come into being beside the roads in the depths of the little woods which line them. Then there are the ill-disciplined but well-dressed regiments of purple and golden crocuses in the bylanes and beneath the gnarled old oaks. No one plants these flowers or picks them either. They are part of the bounty of a vale where all that is precious to look at is free. One of its particular blessings is the way in which primroses perk out of every bank and tree-foot. They have already begun to appear and are guaranteed to last us through Easter and well beyond; hardy, long-lived blossoms whose strength belies their pale-yellow, wistful eyes, each in its setting of dark green.

In the early afternoon the sun is quite warm, enough to persuade you to take off your coat and find a dry spot on a bank to contemplate. Fields, woods and tiny spirals of smoke lead through the still, golden air down to the sea, a mere indeterminate blue smudge on the horizon. Behind us, the fields gain height and steadily build themselves up until they turn into moorland, now featuring delicate pinks and pale mauve, as the sun grips and holds their contours. No sign of man, though this landscape is, for the most part, an artefact of dozens of generations, who settled it first in early Saxon times — as proper farmers, that is: barrows, mounds and strange stones remind us that hairy men were there long before. The inhabitants are still all farmers. There is no other life here, except sowing and reaping, tending livestock (mostly sheep), going to market, making the red earth yield a sustenance. These farmers have known good times and bad — remembered in family histories and folklore — for farms here seldom go to strangers. A combination of malign events and government indifference — or active hostility — have made the present a hard time in which to farm. But no one grumbles unless you inquire. There may be deep cursings in secret hearts, but the whine is never heard. There is talk of the March', though more in sorrow than anger. This superb, goldenstreaked, deep-verdured land is suffering, but it sheds no visible tears. No human moaning reaches the ear amid the tiny wails of newborn, black-eared lambs.

Then in the evening came the sunset, turning low banks of infinitely curved and sculptured clouds into soft golden tresses, against the deepening indigo of the sky. I have seen many more spectacular sunsets in different parts of the world. But none, I felt, had the quiet majesty of this one. It was a calm and retrospective epitaph for a sun that had spread its beams beyond the call of February duty, during a long day, perfect in its season: balm for the winter's hurts, resurrecting buried hopes, thawing the icicles of fear in the hearts of many anxious country people. A very English sunset, understated and gentle, nothing brazen about it, no hint of anger or threat of revenge on the morrow. It was an elegiac celebration of the end of a memorable day, spent in a countryside that is deeply but unostentatiously loved by those who dwell there, content in happiness and sorrow alike to take what providence is pleased to send.