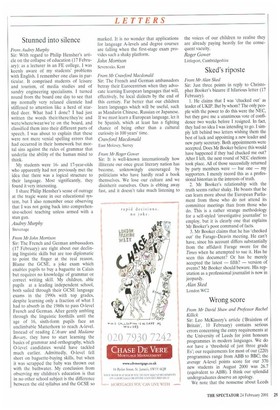 Sir: The French and German ambassadors (17 February) are right about our declining linguistic skills but are too diplomatic to point the finger at the real reason. Blame the GCSE, a joke exam which enables pupils to buy a baguette in Calais but requires no knowledge of grammar or correct writing skill. My children, able pupils at a leading independent school, both sailed through their GCSE language exams in the 1990s with top grades, despite learning only a fraction of what I had to absorb in the 1960s to pass 0-level French and German. After gently ambling through the linguistic foothills until the age of 16, sixth-form pupils face an unclimbable Matterhorn to reach A-level. Instead of reading L'Avare and Madame Bovary, they have to start learning the basics of grammar and orthography, which 0-level candidates would have tackled much earlier. Admittedly, 0-level fell short on baguette-buying skills, but when it was scrapped the baby was thrown out with the bathwater. My conclusion from observing my children's education is that in no other school subject is the difference between the old syllabus and the GCSE so

marked. It is no wonder that applications for language A-levels and degree courses are falling when the first-stage exam provides such a shaky platform.