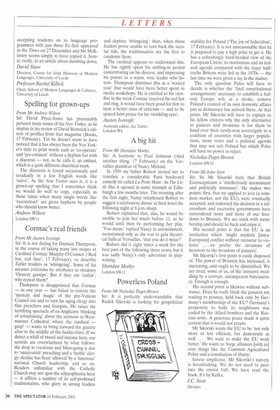 From Mr Nicholas Paget-Brown Sir: It is perfectly understandable that Radek Sikorski is looking for geopolitical stability for Poland (`The joy of federalism', 17 February). It is not unreasonable that he is prepared to pay a high price to get it. He has a refreshingly hard-headed view of the European Union, its institutions and its federal agenda compared with the fuzzy halftruths Britons were fed in the 1970s — the last time we were given a say in the matter.

The only question Poles will have to decide is whether the 'final constitutional arrangements' necessary to establish a federal Europe will, at a stroke, remove Poland's control of its own domestic affairs just as democracy has arrived there. At that point, Mr Sikorski will have to explain to his fellow citizens why the only alternative to panzers and invasions is for them to hand over their newly-won sovereignty to a coalition of countries with larger populations, more votes and a political agenda that may not suit Poland but which Poles will have no power to reject.