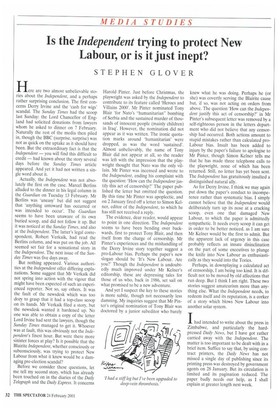 Is the Independent trying to protect New

Labour, or is it just inept?

Here are two almost unbelievable stories about the Independent, and a perhaps rather surprising conclusion. The first concerns Deny Irvine and the 'cash for wigs' scandal. The Sunday Times had the scoop last Sunday: the Lord Chancellor of England had solicited donations from lawyers whom he asked to dinner on 7 February. Naturally the rest of the media then piled in, though the BBC (surprise, surprise) was not as quick on the uptake as it should have been. But the extraordinary fact is that the Independent — you will find this difficult to credit — had known about the story several days before the Sunday Times article appeared. And yet it had not written a single word about it.

Actually, the Independent was not absolutely the first on the case. Marcel Berlins alluded to the dinner in his legal column in the Guardian on Tuesday 13 February. Mr Berlins was 'uneasy' but did not suggest that 'anything untoward has occurred or was intended to occur'. The Guardian seems to have been unaware of its own buried scoop, and did not follow it up. But it was noticed at the Sunday Times, and also at the Independent. The latter's legal correspondent, Robert Verkaik, had read the Berlins column, and was put on the job. All seemed set fair for a sensational story in the Independent. The next issue of the Sunday Times was five days away.

But nothing appeared. Various authorities at the Independent offer differing explanations. Some suggest that Mr Verkaik did not spring into action with the vigour that might have been expected of such an experienced reporter. Not so, say others. It was the fault of the newsdesk which was too dozy to grasp that it had a top-class scoop on its hands. Mr Verkaik filed a story, but the newsdesk wanted it hardened up. No one was able to obtain a copy of the letter Lord Irvine had sent the lawyers, though the Sunday Times managed to get it. Whoever was at fault, this was obviously not the Independent's finest hour. But were there more sinister forces at play? Is it possible that the Blairite Independent, whether consciously or subconsciously, was trying to protect New Labour from what it knew would be a damaging pre-election scandal?

Before we consider these questions, let me tell my second story, which has already been touched on in the diaries of the Daily Telegraph and the Daily Express. It concerns

Harold Pinter. Just before Christmas, the playwright was asked by the Independent to contribute to its feature called 'Heroes and Villains 2000'. Mr Pinter nominated Tony Blair 'for Nato's "humanitarian" bombing of Serbia and the sustained murder of thousands of innocent people (mainly children) in Iraq'. However, the nomination did not appear as it was written. The ironic quotation marks around 'humanitarian' were dropped, as was the word 'sustained'. Almost unbelievably, the name of Tony Blair did not appear at all, so the reader was left with the impression that the playwright thought that Nato was the only villain. Mr Pinter was incensed and wrote to the Independent, ending his complaint with the question: 'How can the Independent justify this act of censorship?' The paper published the letter but omitted the question. By this time Mr Pinter was apoplectic, and on 2 January fired off a letter to Simon Kelner, editor of the Independent, to which he has still not received a reply.

The evidence, dear reader, would appear to point in one direction. The Independent seems to have been bending over backwards, first to protect Tony Blair, and then itself from the charge of censorship. Mr Pinter's experiences and the mishandling of the Deny Irvine story together suggest a pro-Labour bias. Perhaps the paper's new slogan should be 'It's New Labour. Are you?' Though the Independent is undoubtedly much improved under Mr Kelner's editorship, these are depressing tales for those of us who, back in 1986, set sail on what promised to be a new adventure.

And yet I suspect the key to these stories is more subtle, though not necessarily less damning. My inquiries suggest that Mr Pinter's original nomination of Tony Blair was doctored by a junior subeditor who barely

knew what he was doing. Perhaps he (or she) was covertly serving the Blairite cause but, if so, was not acting on orders from above. The question 'How can the Independent justify this act of censorship?' in Mr Pinter's subsequent letter was removed by a self-righteous person in the letters department who did not believe that any censorship had occurred. Both actions amount to stupid mistakes rather than calculated proLabour bias. Insult has been added to injury by the paper's failure to apologise to Mr Pinter, though Simon Kelner tells me that he has made three telephone calls to the playwright, none of which has been returned. Still, no letter has yet been sent. The Independent has gratuitously insulted a distinguished natural ally.

As for Derry Irvine, I think we may again put down the paper's conduct to incompetence rather than systematic bias. I simply cannot believe that the Independent would deliberately turn up its nose at a cracking scoop, even one that damaged New Labour, to which the paper is admittedly sympathetic. It needs every scoop it can get in order to be better noticed, as I am sure Mr Kelner would be the first to admit. But the apparent lack of urgency in this case probably reflects an innate disinclination on the part of some executives to plunge the knife into New Labour as enthusiastically as they would into the Tories.

Perhaps, in downplaying a calculated act of censorship, I am being too kind. It is difficult not to be moved by old affections that run deep. But I think I am right. These two stories suggest amateurism more than anything else. What the Independent needs, to redeem itself and its reputation, is a corker of a story which blows New Labour into another solar system.

Ihad intended to write about the press in Zimbabwe, and particularly the hardpressed Daily News, but I have got rather carried away with the Independent. The matter is too important to be dealt with in a brief item. Suffice to say that, by using contract printers, the Daily News has not missed a single day of publishing since its printing press was destroyed by government agents on 28 January. But its circulation is limited and its pagination reduced. The paper badly needs our help, as I shall explain at greater length next week.