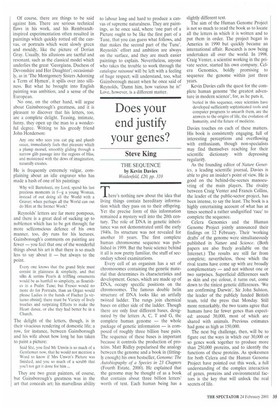 Does your end justify your genes?

THE SEQUENCE by Kevin Davies Weidenfeld, £20, pp. 310 here's nothing new about the idea that living things contain hereditary information which they pass on to their offspring. Yet the precise form of this information remained a mystery well into the 20th century. The role of DNA in genetic inheritance was not demonstrated until the early 1940s. Its structure was not revealed for another 10 years. The first complete human chromosome sequence was published in 1999. But the basic science behind it all is now pretty familiar, the stuff of secondary school examinations.

Every cell of an organism has a set of chromosomes containing the genetic material that determines its characteristics and development. Genes, which are made up of DNA, occupy specific positions on the chromosomes. The famous double helix structure of DNA looks like an artfully twisted ladder. The rungs join chemical bases on either side of the ladder. Though there are only four different bases, designated by the letters A, C, T and G, the complete human genome — the whole package of genetic information — is composed of roughly three billion base pairs. The sequence of these bases is important because it controls the production of proteins. Matt Ridley popularised the analogy between the genome and a book in (fittingly enough) his own bestseller, Genome: The Autobiography of a Species in 23 Chapters (Fourth Estate, 2000). He explained that the genome may be thought of as a book that contains about three billion letters' worth of text. Each human being has a slightly different text.

The aim of the Human Genome Project is not so much to read the book as to locate all the letters in which it is written and to put them in order. The project began in America in 1990 but quickly became an international affair. Research is now being undertaken all over the world. In 1998, Craig Venter, a scientist working in the private sector, started his own company, Celera Genomics, boldly promising to sequence the genome within just three years.

Kevin Davies calls the quest for the com plete human genome 'the greatest adven ture in modern science', for, as he puts it, buried in this sequence, once scientists have developed sufficiently sophisticated tools and computer programs to unearth them, are the answers to the origins of life, the evolution of humanity, and the future of medicine.

Davies touches on each of these matters. His book is consistently engaging, full of interesting perceptions and overflowing with enthusiasm, though non-specialists may find themselves reaching for their scientific dictionary with depressing regularity.

As the founding editor of Nature Genetics, a leading scientific journal, Davies is able to give an insider's point of view. He is good on the behind-the-scenes manoeuvring of the main players. The rivalry between Craig Venter and Francis Collins, the leader of the public-sector project, has been intense, to say the least. The book is a highly entertaining account of what has at times seemed a rather undignified 'race' to complete the sequence.

Celera Genomics and the Human Genome Project jointly announced their findings on 12 February. Their 'working drafts' of the genome were simultaneously published in Nature and Science. (Both papers are also freely available on the Internet.) The results are still far from complete; nevertheless, those which the rival teams have come up with are broadly complementary — and not without one or two surprises. Superficial differences such as skin and eye colour, it turns out, come down to the tiniest genetic differences. 'We are confirming Darwin', Sir John Sulston, the leader of the publicly funded British team, told the press that Monday. Still more remarkably, the two teams agree that humans have far fewer genes than expected: around 30,000, most of which are shared with animals. Previous estimates had gone as high as 150,000.

The next big challenge, then, will be to figure out the ways in which our 30,000 or so genes work together to produce more than 250,000 proteins, and to identify the functions of these proteins. As spokesmen for both Celera and the Human Genome Project have pointed out this week, a full understanding of the complex interaction of genes, proteins and environmental factors is the key that will unlock the real secrets of life.