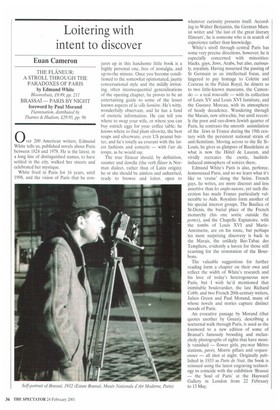 Loitering with intent to discover

THE FLANEUR: A STROLL THROUGH THE PARADOXES OF PARIS by Edmund White Bloomsbwy, £9.99, pp. 211 BRASSAI — PARIS BY NIGHT foreword by Paul Morand Flammarion, distributed by Thames St Hudson, £29.95, pp. 96 Over 200 American writers, Edmund White tells us, published novels about Paris between 1824 and 1978. He is the latest, in a long line of distinguished names, to have settled in the city, walked her streets and celebrated her mystique.

White lived in Paris for 16 years, until 1998, and the vision of Paris that he con jures up in this handsome little book is a highly personal one, free of nostalgia, and up-to-the minute. Once you become conditioned to the somewhat opinionated, jaunty conversational style and the mildly irritating, often inconsequential generalisations of the opening chapter, he proves to be an entertaining guide to some of the lesser known aspects of la ville lumiere. He's witty, wonderfully observant, and he has a fund of esoteric information. He can tell you where to swap your wife, or where you can buy ostrich eggs for your coffee table; he knows where to find plum slivovitz, the best soaps and silverware, even US peanut butter, and he's totally au courant with the latest fashions and conceits — with l'air du temps, as he would say.

The true flaneur should, by definition, saunter and dawdle (the verb /hitter is Norman dialect, rather than of Latin origin); he or she should be aimless and unhurried, ready to browse and loiter, open to whatever curiosity presents itself. According to Walter Benjamin, the German Marxist writer and the last of the great literary flaneurs', he is someone who is in search of experience rather than knowledge.

White's stroll through central Paris has some very precise directions, however; he is especially concerned with minorities: blacks, gays, Jews, Arabs, but also, curiously, royalists. Having mourned the passing of St Germain as an intellectual focus, and lingered to pay homage to Colette and Cocteau in the Palais Royal, he directs us to two little-known museums, the Camondo — a real trouvaille — with its collection of Louis XV and Louis XVI furniture, and the Gustave Moreau, with its atmosphere of heady decadence. Wandering through the Marais, now ultra-chic, but until recently the poor and run-down Jewish quarter of Paris, he contrasts the smooth assimilation of the Jews in France during the 19th century with the persistent national strain of anti-Semitism. Moving across to the Ile StLouis, he gives us glimpses of Baudelaire at what is now the Hotel de Lauzun, and vividly recreates the exotic, hashishinduced atmosphere of soirees there.

Edmund White's Paris is also, perforce, homosexual Paris, and so we learn what it's like to 'cruise' along the Seine. French gays, he writes, are more discreet and less assertive than les anglo-saxons, yet such discretion has made France particularly vulnerable to Aids. Royalists form another of his special interest groups. The Basilica of St-Denis, the burial place of the French monarchy (his one sortie outside the portes), and the Chapelle Expiatoire, with the tombs of Louis XVI and MarieAntoinette, are on his route, but perhaps his most surprising discovery is back in the Marais, the unlikely Bar-Tabac des Templiers, evidently a haven for those still yearning for the restoration of the Bourbons.

The valuable suggestions for further reading form a chapter on their own and reflect the width of White's research and his love of today's heterogeneous new Paris, but I wish he'd mentioned that inimitable boulevardier, the late Richard Cobb, and two French 20th-century writers, Julien Green and Paul Morand, many of whose novels and stories capture distinct moods of Paris.

An evocative passage by Morand (that quotes another by Green), describing a nocturnal walk through Paris, is used as the foreword to a new edition of some of Brasses famously brooding and melancholy photographs of sights that have mostly vanished — flower girls, pre-war Metro stations, paves, Morris pillars and vespasiennes — all shot at night. Originally published in 1933 as Paris de Nuit, the book is reissued using the latest engraving technology to coincide with the exhibition 'Brassai — the Soul of Paris' at the Hayward Gallery in London from 22 February to 13 May.