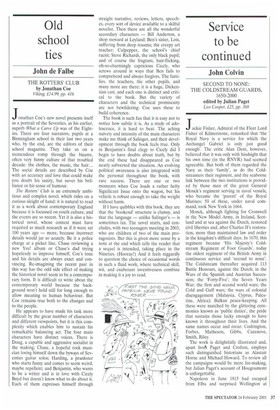 THE ROTTERS' CLUB by Jonathan Coe Viking, £14,99, pp. 416 Jonathan Coe's new novel presents itself as a portrait of the Seventies, as his earlier, superb What a Carve Up was of the Eighties. There are four narrators, pupils at a Birmingham school in their last two years who, by the end, are the editors of their school magazine. They take us on a tremendous romp through the bizarre, often very funny culture of that troubled decade: the clothes, the music, the hair... The social details are described by Coe with an accuracy and love that could make you doubt his sanity, but never his brilliance or his sense of humour.

The Rotters' Club is an extremely ambitious and complex novel, which rides on a curious sleight of hand: it is natural to read it as a work about contemporary England because it is focussed on youth culture, and the events are so recent. Yet it is also a historical novel, whose context must have required as much research as if it were set 100 years ago — more, because incorrect details would jar so acutely. Be it a police charge at a picket line, Chase reviewing a new Yes! album or Chase's dad trying hopelessly to improve himself, Coe's tone and his details are always exact and convincing. Re-imagining the recent past in this way has the odd side effect of making the historical novel seem to be a contemporary form. It is difficult to write about the contemporary world because the background won't hold still for long enough to allow meaning to human behaviour. But Coe remains true both to the changes and to the people.

He appears to have made his task more difficult by the great number of characters and different viewpoints, but it is this complexity which enables him to sustain his remarkable balancing act. The four main characters have distinct voices. There is Doug, a capable and aggressive socialist in the making; Chase, a hopeful rock musician losing himself down the byways of Seventies guitar solos; Harding, a prankster who starts funny and comes to seem weird, maybe repellent; and Benjamin, who wants to be a writer and is in love with Cicely Boyd but doesn't know what to do about it. Each of them expresses himself through straight narrative, reviews, letters, speeches, every sort of device available to a skilful novelist. Then there are all the wonderful secondary characters — Bill Anderton, a shop steward at Leyland; Ben's sister, Lois, suffering from deep trauma; the creepy art teacher: Culpepper, the school's chief racist; Steve Richards, the only black pupil; and of course the fragrant, hair-flicking, oh-so-charmingly capricious Cicely, who screws around in ways that Ben fails to comprehend and always forgives. The families, the teachers, the other pupils, and many more are there: it is a huge, Dickensian cast, and each one is distinct and critical to the book. But the variety of characters and the technical promiscuity are not bewildering: Coe uses these to build coherence.

The book is such fun that it is easy not to notice how subtle it is. As a study of adolescence, it is hard to beat. The aching nalivety and intensity of the main characters make me think of Salinger, and their development through the book feels true. Only in Benjamin's final elegy to Cicely did I begin to have doubts about truth, but by the end these had disappeared as Coe neatly subverted the situation. An evolving political awareness is also integrated with the personal throughout the book, with rare success. There are one or two moments when Coe loads a rather hefty Significant Issue onto the wagon, but his vehicle is robust enough to take the weight without harm.

If I have quibbles with this book, they are that the 'bookend' structure is clumsy, and that the language — unlike Salinger's — is sometimes lax. The novel starts, and concludes, with two teenagers meeting in 2003, who are children of two of the main protagonists. But this is given more sense by a note at the end which tells the reader that a sequel is intended, taking place in the Nineties. (Hooray!) And it feels niggardly to question the choice of occasional words in such a fluid work, where technical skill, wit, and exuberant inventiveness combine in making it a joy to read,