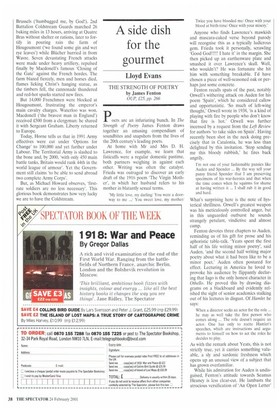 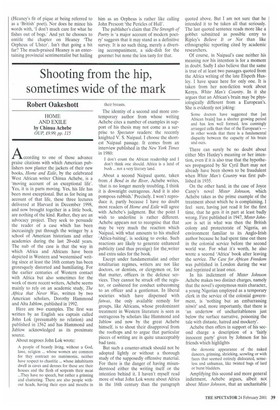 A side dish for the gourmet

Poets are an infuriating bunch. In The Strength of Poetty James Fenton draws together an amusing compendium of soundbites and snapshots from the lives of the 20th century's leading poets.

At home with Mr and Mrs D. H. Lawrence, for example, we learn that fisticuffs were a regular domestic pastime, both partners weighing in against each other. Writing was often the catalyst. Frieda was outraged to discover an early draft of the 1916 poem 'The Virgin Mother', in which her husband refers to his mother in blatantly sexual terms.

'My tittle love, my darling/ You were a doorway to me .../ You sweet love, my mother/

Anyone who finds Lawrence's mawkish and mascara-caked verse beyond parody will recognise this as a typically ludicrous gem. Frieda took it personally, scrawling 'Good God1 I hate it' in the margin. She then picked up an earthenware plate and smashed it over Lawrence's skull. Well, who wouldn't? He was fortunate she hit him with something breakable. I'd have chosen a piece of well-seasoned oak or perhaps just some concrete.

Fenton recalls spats of the past, notably Orwell's withering attack on Auden for his poem 'Spain', which he considered callow and opportunistic. 'So much of left-wing thought,' Orwell wrote in 1938, is a kind of playing with fire by people who don't know that fire is hot.' Orwell was further incensed by a request from the Left Review for authors 'to take sides on Spain'. Having recently been shot in the neck doing precisely that in Catalonia, he was less than delighted by this invitation. 'Stop sending me this bloody rubbish,' he fires back angrily,

I'm not one of your fashionable pansies like Auden and Spender ... By the way tell your pansy friend Spender that I am preserving specimens of his war-heroics and that when the time comes when he squirms for shame at having written it ... I shall rub it in good and hard.

What's surprising here is the note of hysterical shrillness. Orwell's greatest weapon was his meticulously controlled anger, but in this unguarded outburst he sounds strangely petulant, vindictive and almost camp.

Fenton devotes three chapters to Auden, reminding us of his gift for prose and his aphoristic table-talk. 'Yeats spent the first half of his life writing minor poetry', said Auden, 'and the second half writing major poetry about what it had been like to be a minor poet.' Auden often postured for effect. Lecturing in America he loved to provoke his audience by flippantly declaring that Iago is the only honest character in Othello. He proved this by drawing diagrams on a blackboard and evidently relished the sight of senior academics stalking out of his lectures in disgust. Of Hamlet he says:

When a director seeks an actor for the role ... he may as well take the first person who comes along ... The role doesn't require an actor. One has only to recite Hamlet's speeches, which are instructions and arguments to himself on how to act the roles he decides to play.

As with the remark about Yeats, this is not strictly true, yet it carries something valuable, a sly and sardonic freshness which opens up an unusual view of a subject that has grown overfamiliar.

While his admiration for Auden is undisguised, Fenton's attitude towards Seamus Heaney is less clear-cut. He lambasts the atrocious versification of 'An Open Letter' (Heaney's fit of pique at being referred to as a 'British' poet). Nor does he mince his words with, 'I don't much care for what he fishes out of bogs.' And yet he chooses to entitle the chapter on Heaney 'The Orpheus of Ulster'. Isn't that going a bit far? The much-praised Heaney is an entertaining provincial sentimentalist but hailing him as an Orpheus is rather like calling John Prescott 'the Pericles of Hull'.

The publisher's claim that The Strength of Poetry is 'a major account of modern poetry' suggests that it may stand as a definitive survey. It is no such thing, merely a diverting accompaniment, a side-dish for the gourmet but none the less tasty for that.