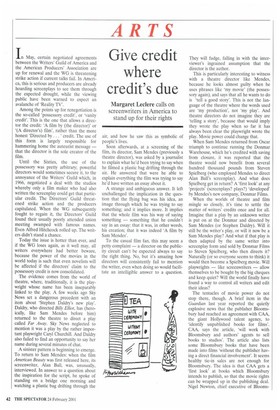 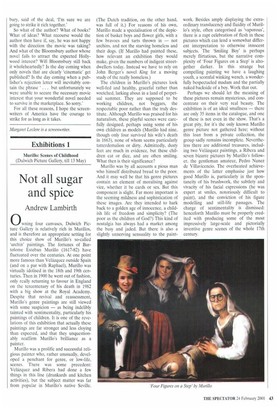 Give credit where credit's due

In May, certain negotiated agreements between the Writers' Guild of America and the American Producers' Association are up for renewal and the WG is threatening strike action if current talks fail. In America, this is serious and producers are already hoarding screenplays to see them through the expected drought, while the viewing public have been warned to expect an avalanche of 'Reality TV'.

Among the points up for renegotiation is the so-called 'possessory credit', or 'vanity credit'. This is the one that allows a director the credit: 'A film by (the director)' or `(A director's) film', rather than the more honest 'Directed by . . . ' credit. The use of this form is largely responsible for hammering home the auteurist message — that the director is the sole creator of the film.

Until the Sixties, the use of the possessory was pretty arbitrary; powerful directors would sometimes secure it, to the annoyance of the Writers' Guild which, in 1966, negotiated a deal with the studios whereby only a film maker who had also written the screenplay could get that particular credit. The Directors' Guild threatened strike action and the producers capitulated. When the WG subsequently fought to regain it, the Directors' Guild found their usually poorly attended union meeting swamped with famous names. Even Alfred Hitchcock rolled up. The writers didn't stand a chance.

Today the issue is hotter than ever, and if the WG loses again, as it well may, all writers everywhere had better beware, because the power of the movies in the world today is such that even novelists will be affected if the directors' claim to the possessory credit is now consolidated.

The evidence comes from the world of theatre, where, traditionally, it is the playwright whose name has been inseparably linked to the play. A few weeks ago Sky News set a dangerous precedent with an item about 'Stephen Daldry's new play'. Daldry, who directed Billy Elliot, has (heroically, like Sam Mendes before him) returned to the theatre to direct a play called Far Away. Sky News neglected to mention it was a play by the rather important playwright Caryl Churchill. And Daldiy also failed to find an opportunity to say her name during several minutes of chat.

A sinister pattern is beginning to emerge. To return to Sam Mendes: when the film American Beauty was first released here, its screenwriter, Alan Ball, was, unusually, interviewed. In answer to a question about the inspiration for the script, he spoke of standing on a bridge one morning and watching a plastic bag drifting through the

air, and how he saw this as symbolic of people's lives.

Soon afterwards, at a screening of the film, its director, Sam Mendes (previously a theatre director), was asked by a journalist to explain what he'd been trying to say when he filmed a plastic bag drifting through the air. He answered that were he able to explain everything the film was trying to say he'd have written an essay about it.

A strange and ambiguous answer. It left unchallenged the implication in the question that the flying bag was his idea, an image through which he was trying to say something; and it implies more. It implies that the whole film was his way of saying something — something that he couldn't say in an essay: that it was, in other words, his creation; that it was indeed 'A film by Sam Mendes'.

To the casual film fan, this may seem a petty complaint — a director on the publicity circuit can't be expected always to say the right thing. No, but it's amazing how directors will consistently fail to mention the writer, even when doing so would facilitate an intelligible answer to a question. They will fudge, falling in with the interviewer's ingrained assumption that the director is the author.

This is particularly interesting to witness with a theatre director like Mendes, because he looks almost guilty when he uses phrases like 'my movie' (the possessory again), and says that all he wants to do is 'tell a good story'. This is not the language of the theatre where the words used are 'my production', not 'my play'. And theatre directors do not imagine they are 'telling a story', because that would imply they wrote the play when so far it has always been clear the playwright wrote the play. Movie power could change that.

When Sam Mendes returned from Oscar triumph to continue running the Donmar Warehouse, which he's credited with saving from closure, it was reported that the theatre would now benefit from several hundred thousand pounds from Steven Spielberg (who employed Mendes to direct Alan Ball's screenplay). And what does Spielberg get in return? A 'first look' at any 'projects' (screenplays? plays?) 'developed' by Mendes's new company, Donmar Films.

When the worlds of theatre and film mingle so closely, it's time to settle the matter of writers' credits once and for all. Imagine that a play by an unknown writer is put on at the Donmar and directed by Sam Mendes (or Stephen Daldry). Will it still be the writer's play, or will it now be a Sam Mendes play? And what if that play is then adapted by the same writer into screenplay form and sold by Donmar Films to Steven Spielberg, who then directs it? Naturally (or so everyone seems to think) it would then become a Spielberg movie. Will playwrights — like screenwriters — allow themselves to be bought by the big cheques and keep quiet? Will the world finally have found a way to control all writers and edit their ideas?

The tentacles of movie power do not stop there, though. A brief item in the Guardian last year reported the quietly explosive news that the publisher Bloomsbury had reached an agreement with CAA, the giant Hollywood talent agency, to 'identify unpublished books for films'. CAA, says the article, 'will work with Bloomsbury and authors' agents to sell books to studios'. The article also lists some Bloomsbury books that have been made into films 'without the publisher having a direct financial involvement'. It seems healthy tie-in sales are not enough for Bloomsbury. The idea is that CAA gets a 'first look' at books which Bloomsbury intends to publish, so that the movie rights can be wrapped up in the publishing deal. Nigel Newton, chief executive of Blooms

bury, said of the deal, 'I'm sure we are going to strike it rich together.'

So what of the author? What of books? What of ideas? What recourse would the author then have if, say, he was not happy with the direction the movie was taking? And what of the Bloomsbury author whose novel fails to attract the expected Hollywood interest? Will Bloomsbury still back it wholeheartedly? Is the day coming when only novels that are clearly 'cinematic' get published? Is the day coming when a publisher's rejection letter will inevitably contain the phrase ' ... but unfortunately we were unable to secure the necessary movie interest that your wonderful novel needed to survive in the marketplace. So sorry.'

For all these reasons. I hope the screenwriters of America have the courage to strike for as long as it takes.

Margaret Leclerc is a screenwriter.