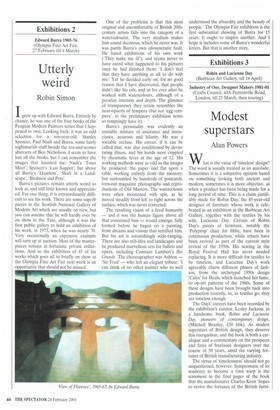 Igrew up with Edward Burra. Entirely by chance, he was one of the four books of the Penguin Modern Painters series that I happened to own. Looking back, it was an odd selection for a ten-year-old: Stanley Spencer; Paul Nash and Burra, some fairly nightmarish stuff beside the tea-and-scones abstracts of Ben Nicholson. I seem to have lost all the books, but I can remember the images that haunted me: Nash's 'Totes Meer'; Spencer's 'Last Supper'; but above all Burra's 'Haarlem', 'Skull in a Landscape', 'Birdmen and Pots'.

Burra's pictures remain utterly weird to look at, and still little known and appreciated. For one thing, it is extraordinarily difficult to see his work. There are some superb pieces in the Scottish National Gallery of Modern Art which are usually on view, but you can assume that he will hardly ever be on show in the Tate, although it was the first public gallery to hold an exhibition of his work, in 1973, when he was nearly 70. Very occasionally an expensive example will turn up at auction. Most of the masterpieces remain in fortunate private collections. And so the exhibition of 45 of his works which goes all to briefly on show at the Olympia Fine Art Fair next week is an opportunity that should not be missed. One of the problems is that this most original and uncomfortable of British 20thcentury artists falls into the category of a watercolourist. The very medium makes him sound decorous, which he never was. It was partly Burra's own idiosyncratic fault. He hated exhibitions of his own work (`They make me ill'); and seems never to have cared what happened to his pictures once he had finished them: 'I don't feel that they have anything at all to do with me.' Yet he decided early on, for no good reason that I have discovered, that people didn't like his oils, and so for ever after he worked with watercolours, although of a peculiar intensity and depth. The glimmer of transparency they retain resembles the near-opacity of tempera (but not 'egg tempura', as the preliminary exhibition notes so temptingly have it).

Burra's personality was evidently an unstable mixture of assurance and insouciance, neurosis and hilarity. He was a sociable recluse. His career, if it can be called that, was also conditioned by devastating illness, and his hands were crippled by rheumatic fever at the age of 12. His working methods were as odd as the images he produced: the paper laid flat upon a table, working entirely from the memory, but surrounded by hundreds of postcards, torn-out magazine photographs and reproductions of Old Masters. The watercolours were often moistened with spit, as he moved steadily from left to right across the surface, which was never corrected.

The resulting vision of a feral humanity — and it was the human figure above all that concerned him — would emerge, fully formed before he began on a painting, from dreams and visions that terrified him. But his art is astonishingly wide-ranging. There are also still-lifes and landscapes and he produced marvellous sets for ballets and opera, including Constant Lambert's Rio Grande. The choreographer was Ashton — 'Sir Fred' — who left an elegant tribute: 'I can think of no other painter who so well understood the absurdity and the beauty of people.' The Olympia Fair exhibition is the first substantial showing of Burra for 15 years. It ought to inspire another. And I hope it includes some of Burra's wonderful letters. But that is another story.