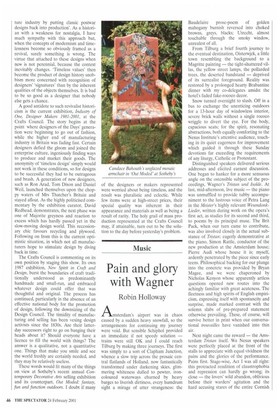 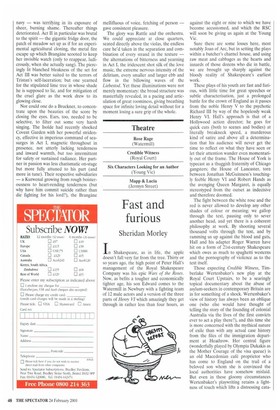 Pain and glory with Wagner

Ansterdam's airport was in chaos caused by a sudden heavy snowfall, so the arrangements for continuing my journey were void. But sensible Schiphol provided an immediate if not speedy solution — trains were still OK and I could reach Tilburg by making three journeys. The first was simply to a sort of Clapham Junction, whence a slow trip across the prosaic central flatlands of Holland, now fantastically transformed under darkening skies, glimmering whiteness dulled to pewter, ironcoloured waterways churned by heavy barges to liverish dirtiness, every humdrum sight a mirage of utter strangeness: the

From Tilburg a brief fourth journey to the eventual destination, Oisterwjck, a little town resembling the background to a Magritte painting — the tight-shuttered villas, the yellow street lamps, the pollarded trees, the deserted bandstand — deprived of its surrealist foreground. Reality was restored by a prolonged hearty Brabantine dinner with my co-delegates amidst the hotel's faded fake-rococo decor.

Snow turned overnight to slush. Off in a bus to exchange the unenticing outdoors for a 13-hour day of windowless interior, severe brick walls without a single rococo wriggle to divert the eye. For the body, capacious seats; for the spirit, resonating abstractions, both equally comforting to the Nexus Institute's attentive audience, touching in its quiet eagerness for improvement which guided it through these Sunday devotions far exceeding the requirements of any liturgy, Catholic or Protestant.

Distinguished speakers delivered serious addresses and elicited earnest discussion. One began to hanker for a more sensuous angle on the ostensible subject of the proceedings, Wagner's Tristan und Isolde. At last, mid-afternoon, live music — the piano was unmuffled to provide tubby accompaniment to the lustrous voice of Petra Lang in the Meister's highly relevant WesendonkLieder, written during work on the opera's first act, as studies for its second and third, to poems by its principal muse. The Brit Pack, when our turn came to contribute, was also involved closely in the actual substance of Tristan; eagerly demonstrative at the piano, Simon Rattle, conductor of the new production at the Amsterdam house; Pierre Audi whose house it is; myself, ardently penetrated by the piece since early teens. Philosophical backing for our plunge into the concrete was provided by Bryan Magee, and we were chaperoned by Nicholas Kenyon whose apparently artless questions opened new routes into the achingly familiar with great acuteness. The fleetness and high spirits of English empiricism, expressing itself with spontaneity and surprise, made marked contrast with the solemn slabs of pre-prepared statement otherwise prevailing. These, of course, will survive better in print when our conversational trouvailles have vanished into thin air.

Next night came the reward — the Amsterdam Tristan itself. We Nexus speakers were perfectly placed at the front of the stalls to appreciate with equal vividness the pains and the glories of the performance. Pains first. Stage-wise, Act I was all right: this protracted rendition of claustrophobia and repression can hardly go wrong; its close — the lovers' wild abandon, oblivious before their warders' agitation and the hard accusing stares of the entire Cornish

navy — was terrifying in its exposure of sheer, burning shame. Thereafter things deteriorated. Act II in particular was brutal to the spirit — the gigantic fridge door, the patch of meadow set up as if for an experimental agricultural cloning, the metal fire escape up which Brangane scooted to keep her invisible watch (only to reappear, ludicrously, when she actually sang). The piercingly lit blanched bleakness of the set for Act III was better suited to the terrors of Tristan's self-laceration; but one yearned for the stipulated lime tree in whose shade he is supposed to lie, and for mitigation of the cruel glare as the work drew to its glowing close.

Nor could one do a Bruckner, to concentrate upon the beauties of the score by closing the eyes. Ears, too, needed to be selective, to filter out some very harsh singing. The Isolde had recently shocked Covent Garden with her powerful stridency, effective in imperious command of seasurges in Act I, magnetic throughout in presence, not utterly lacking tenderness and inward warmth, but too intermittent for safety or sustained radiance. Her partner in passion was less charismatic on-stage but more fully attuned to his part (and more in tune). Their respective subsidiaries — a Kurwenal growing from rough boisterousness to heart-rending tenderness (but why have him commit suicide rather than die fighting for his lord?), the Brangane mellifluous of voice, fetching of person — gave consistent pleasure.

The glory was Rattle and the orchestra. We could appreciate at close quarters, seated directly above the violas, the endless care he'd taken in the separation and combination of every strand in the texture — the alternations of bitterness and yearning in Act I, the iridescent shot silk of the love music, the extreme nervous intensity of the delirium, every smaller and larger ebb and flow in the billowing waves of the Liebestod. Yet these illuminations were not merely momentary: the broad structure was masterfully revealed, in a pacing and articulation of great roominess, giving breathing space for infinite loving detail without for a moment losing a sure grip of the whole.