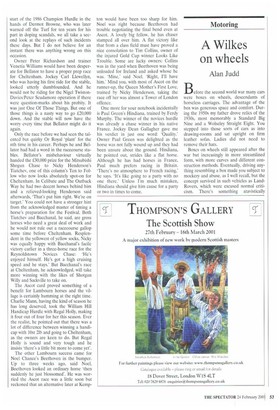 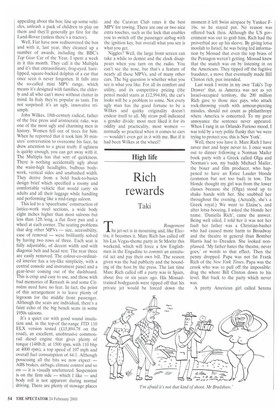 A Wilkes on wheels

Before the second world war many cars were boxes on wheels, descendants of horseless carriages. The advantage of the box was generous space and comfort. During the 1950s my father drove relics of the 1930s, most memorably a Standard Big Nine and a Wolseley Straight Eight. You stepped into those sorts of cars as into drawing-rooms and sat upright on firm leather sofas. Ladies did not need to remove their hats.

Boxes on wheels still appeared after the war but increasingly in more streamlined form, with more curves and different construction methods. Eventually, driving anything resembling a box made you subject to mockery and abuse, as I well recall, but the concept survived in such vehicles as LandRovers, which were excused normal criticism. There's something atavistically appealing about the box: line up some vehicles, unleash a pack of children to play on them and they'll generally go first for the Land-Rover (unless there's a tractor).

Well, Fiat have now rediscovered the box and with it, last year, they cleaned up a number of awards, including the BBC's Top Gear Car of the Year. I spent a week in it this month. They call it the Multipla and it's that extraordinary, frog-eyed, harelipped, square-backed dolphin of a car that once seen is never forgotten. It falls into the so-called mini MPV range, which means it's designed with families, the elderly and all who can't move without clutter in mind. In Italy they're popular as taxis. I'm not surprised: it's an ugly, innovative triumph.

John Wilkes, 18th-century radical, father of the free press and aristocratic rake, was one of the most ugly and charming men in history. Women fell out of trees for him. When he reported that it took him 30 minutes' conversation to overcome his face, he drew attention to a great truth: if ugliness is quirky enough, you can get away with it. The Multipla has that sort of quirkiness. There is nothing accidentally ugly about the waist-high headlights, bulbous bodywork, vertical sides and unabashed width. They derive from a bold back-to-basics design brief which specified a roomy and comfortable vehicle that would carry six adults and all their luggage while handling and performing like a mid-range saloon.

This led to a `spaceframe' construction of lattice-work steel sections, a wide body eight inches higher than most saloons but less than 12ft long, a flat floor pan and a wheel at each corner. The seating problems that dog other MPVs — size, accessibility, ease of removal — were brilliantly solved by having two rows of three. Each seat is fully adjustable, of decent width and with diagonal belt and head rest. The rear three are easily removed. The colour-co-ordinated interior has a toy-like simplicity, with a central console and instrument panel and a gear-lever coming out of the dashboard. This is crisp and easy to use, and those with bad memories of Renault 4s and some Citroens need have no fear. In fact, the point of this arrangement is to leave plenty of legroom for the middle front passenger. Although the seats are individual, there's a faint echo of the big bench seats in some 1950s saloons.

It's a quiet car with good sound insulation and, in the top-of the-range JTD 110 ELX version tested (£15,894.78 on the road), an excellent, unobtrusive commonrail diesel engine that gives plenty of torque (1481b.ft. at 1500 rpm, with 110 bhp at 4000 rpm), a top speed of 107 mph and overall fuel consumption of 44.1. Although possessing all the bits we now expect — ABS brakes, airbags, climate control and so on — it is visually uncluttered. Suspension is on the firm side — which I like — and body roll is not apparent during normal driving. There are plenty of stowage places and the Caravan Club rates it the best MPV for towing. There are one or two nice extra touches, such as the lock that enables you to switch off the passenger airbag with the ignition key, but overall what you see is what you get.

Niggles? Well, the large front screen can take a while to demist and the clock disappears when you turn on the radio. You can't see the nose, but that's a feature of nearly all these MPVs, and of many other cars. The big question is whether what you see is what you like. For all its comfort and utility, and its competitive pricing (the petrol model starts at £12,994.88), the car's looks will be a problem to some. Not every ugly man has the good fortune to be a Wilkes and quirky originality doesn't endear itself to all. My straw poll indicated a gender divide: most men liked it for its oddity and practicality, most women — normally so practical when it comes to cars — wouldn't even get in it with me. But if it had been Wilkes at the wheel?