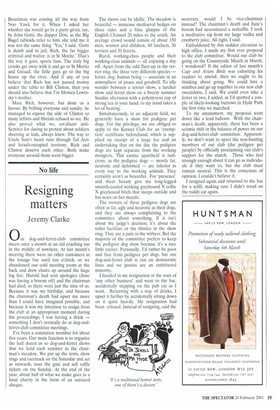 Our dog-and-ferret-club committee meets once a month at an old coaching inn in the middle of nowhere. At last month's meeting there were no other customers in the lounge bar until ten o'clock, so we abandoned our cold meeting room at the back and drew chairs up around the huge log fire. Harold had sent apologies (June was having a bosom off) and the chairman had died, so there were just the nine of us. Because it was my birthday, and because the chairman's death had upset me more than I could have imagined possible, and because it was my intention to resign from the club at an appropriate moment during the proceedings, I was having a drink — something I don't normally do at dog-andferret-club committee meetings.

I've been a committee member for about five years. Our main function is to organise the half dozen or so dog-and-ferret shows that we hold each summer in the chairman's meadow. We put up the tents, show rings and racetrack on the Saturday and act as stewards, man the gate and sell raffle tickets on the Sunday. At the end of the year, about half of what we make goes to a local charity in the form of an outsized cheque. The shows can be idyllic. The meadow is beautiful — immense mediaeval hedges on three sides and a blue glimpse of the English Channel 20 miles to the south. An average crowd would consist of about 150 men, women and children, 40 lurchers, 30 terriers and 30 ferrets.

Rural, working-class people and their working-class animals — all enjoying a day off. Apart from the odd flare-up in the terrier ring, the three very different species — ferret, dog, human being — associate in an atmosphere of peace and goodwill. To idly wander between a terrier show, a lurcher show and ferret show on a breezy summer Sunday afternoon with a polystyrene cup of strong tea in your hand, to my mind takes a lot of beating.

Simultaneously, in an adjacent field, we generally have a show for pedigree pet dogs. For the privilege, we are obliged to apply to the Kennel Club for an 'exemption' certificate beforehand, which is supplied on receipt of a large fee and an undertaking that on the day the pedigree dogs are kept separate from the working mongrels. This canine apartheid is ludicrous, as the pedigree dogs — mostly fat, neurotic and deformed — are inferior in every way to the working animals. They certainly aren't as beautiful. For 'presence' and sheer beauty give me long-legged smooth-coated working greyhound X collie X greyhound bitch that sleeps outside and has scars on her muzzle.

The owners of these pedigree dogs are often as fat, ugly and neurotic as their dogs, and they are always complaining to the committee about something. If it isn't about the judge's decision, it's about the toilet facilities or the thistles in the show ring. They are a pain in the withers. But the majority of the committee prefers to keep the pedigree dog show because it's a nice little earner. Personally. I'd rather be poor and free from pedigree pet dogs, but our dog-and-ferret club is run on democratic lines and we purists are an embittered minority.

I handed in my resignation at the start of 'any other business' and went to the bar, accidentally stepping on the pub cat as I went. Returning with a tray of drinks, 1 upset it further by accidentally sitting down on it quite heavily. My resignation had been refused. Instead of resigning, said the secretary, would I be vice-chairman instead? The chairman's death and June's bosom had necessitated a reshuffle. I took a meditative sip from my large vodka and cranberry juice. All right, I said.

Emboldened by this sudden elevation to high office, I made my first ever proposal to the club committee. Would our club be going on the Countryside March in March, I wondered? If the editor of last month's Cage and Aviary Birds was exhorting his readers to attend, then we ought to be thinking about going. We could hire a minibus and go up together in our new club sweatshirts, I said. We could even take a ferret or two, I added, as I'd spotted a couple of likely-looking burrows in Hyde Park the first time we marched.

To my amazement, my proposal went down like a lead balloon. With the chairman's death, apparently, there has been a seismic shift in the balance of power on our dog-and-ferret-club committee. Apparently, we don't want to upset the non-hunting members of our club (the pedigree pet people) by officially proclaiming our club's support for the march. Those who feel strongly enough about it can go as individuals if they want to, but the club must remain neutral. This is the consensus of opinion. I couldn't believe it.

I resigned again and returned to the bar for a refill, making sure I didn't tread on the ruddy cat again.